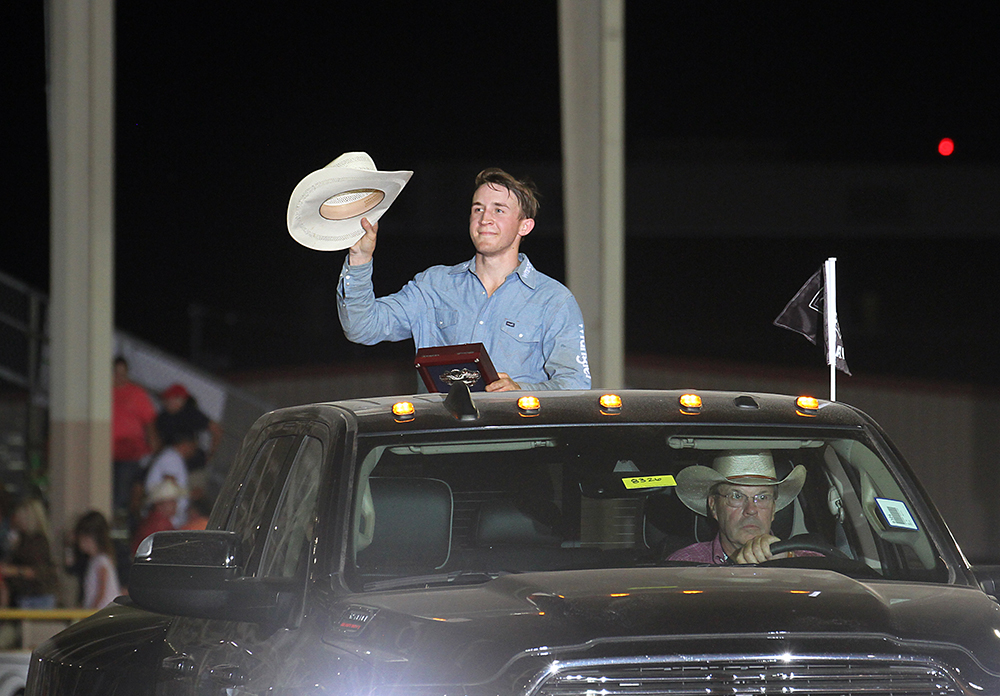 LOVINGTON, N.M. – For the last five years, Trey Kimzey has watched from the sidelines as older brother Sage has lived his rodeo dreams.

Sage Kimzey has won the last five bull riding world championships and leads the standings again, but he’s been sharing the limelight with his little brother a bit this season.

On Tuesday night, Trey Kimzey rodeo two bulls to win the Lea County Xtreme Bulls competition at Jake McClure Arena in Lovington and pocketed $10,490 in the process. That pushes his season earnings to more than $85,000 and moves him up to 11th in the world standings with less than two months remaining in ProRodeo’s regular season.

“It’s crunch time,” said Kimzey, 20, of Strong City, Oklahoma, who rodeo Stace Smith Pro Rodeo’s Hex to finish fifth in the opening round, then won the final round with an 87.5-point ride on Lancaster & Jones Pro Rodeo’s White Walker. “Everybody’s trying to make the NFR. Everybody’s riding good, so you’ve got to get the money where it counts. This is a dang big rodeo, and it’s going to pay good, so I appreciate it.”

The reason he feels the end-of-the-season crunch is that only the top 15 on the money list in each event advance to the National Finals Rodeo, the sport’s grand finale that takes place over 10 December nights in Las Vegas.

He’s in a good place now, but that can change quickly with dozens of big-money events taking place between now and the final day of the season on Sept. 30. In addition to his place in the world standings, he is eighth in the Xtreme Bulls standings and second in the rookie-of-the-year race. He only trails Stetson Wright in the rookie race, and Wright is the No. 1 man in the all-around world standings.

“There’s not that many years that two rookies make it to the finals,” Kimzey said. “I think Stetson and me have a pretty good chance at that. Nothing matters until you make the big show; once you get there, 10 days in Vegas fits my riding style, so we’ll see who wins.”

His riding style has come from years of competing in the sport and doing other things around the game. The youngest son of a longtime rodeo clown, Ted Kimzey, Trey has done trick riding, trick roping, tie-down roping and team roping.

“I always knew I was going to be a bull rider,” Trey Kimzey said. “Everything else just got in the way, but I wanted to be a bull riding my whole life and go to the NFR.

Part of that past is growing up in an active family. He’s looked up to his big brother, as most younger siblings do, and he’s had opportunities to learn that some haven’t.

“I think one of the big things was my foundation,” he said. “I was getting on this caliber of bulls when I was 16 and 17, so I had two years of it before others even had a year of it. I feel like that helped me out at a very young age.”

Like all others who compete in the sport, Kimzey would like to own that coveted Montana Silversmiths gold buckle, just like the five that his brother already has. There’s work to be done, though.

“You’ve got to stay on your bulls,” Kimzey said. “At this point, everybody that’s still going up and down the road pretty hard is in contention to go to the NFR.

“Everybody wants a gold buckle, so that’s the main goal. I’ve got to get to Vegas first, then we’ll see how it plays out.”