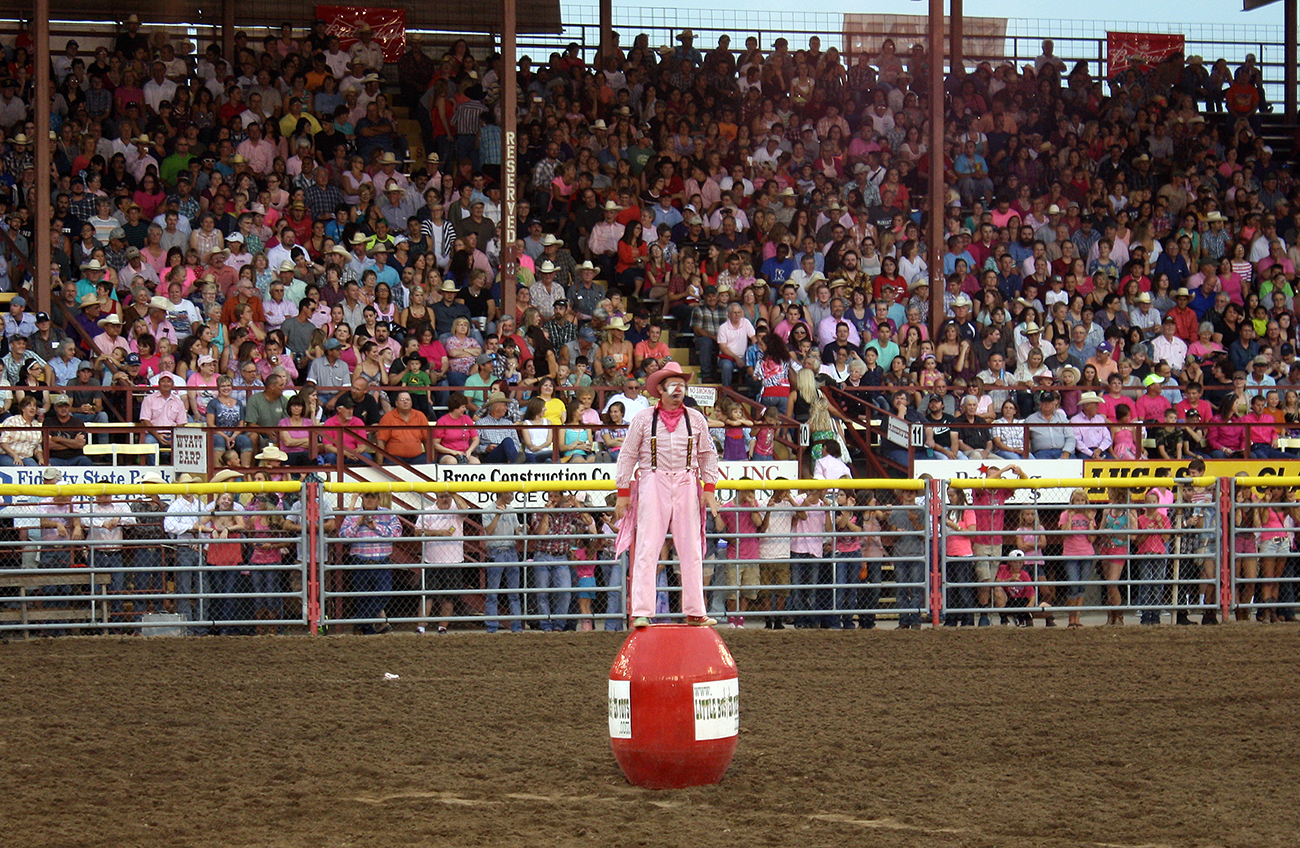 BELLVILLE, Texas – Dale McCracken has multiple personalities, but it’s not a disorder.

It’s quite the opposite, really. Like a superhero donning his cape, McCracken covers his face with greasepaint and enters the world of his alter-ego, Gizmo, the funnyman/barrelman who has entertained rodeo crowds for much of his life. It’s as if Dale drives and Gizmo does all the work, but it works well for McCracken.

“The guy that wears the makeup gets paid better, that’s for sure,” said McCracken, who will be one of the featured acts at the Austin County Fair and Rodeo, set for 7:30 p.m. Thursday, Oct. 10-Saturday, Oct. 12, at the Austin County Fairgrounds in Bellville. “The name came along several years ago. I worked on a music show in Branson (Missouri) for about eight years, and there you’ve got to have a stage name.

“So, with all the gizmos and gadgets I had, they came up with the name, ‘Gizmo, the Ozarks Greatest Inventor.’ So, instead of selling a particular act, I sell a character.”

That character carries on several personas, but they’re all comedic. During much of the rodeo, he’ll do what is called the “walk and talk,” sharing his comedy with the audiences each night of the three-performance rodeo.

“We’ve got a lot of stuff planned for Bellville,” said McCracken, still referring, possibly, to his multiple personalities. “The big thing we do is the ‘walk and talk,’ and we work it from the hello to the end. I’ll bring out a lot of characters throughout the rodeo, because I think if you come for more than one night, you should see the different characters.”

“You always hope you’re going to win,” McCracken said. “Everybody wants to win something like that. The first couple of years I was nominated, I was hopeful. I was a little jittery. Then we had a dry spell for a few years that we weren’t even nominated.

“(In 2016) I was nominated for Clown of the Year and comedy act. I had gotten a little numb to not winning. I felt like I was past my shot at winning it.”

Such is McCracken’s life as a rodeo clown. He spends many weeks on the road, working events in several states, but he loves what he does. He enjoys the crowds and the excitement that comes with rodeo, and loves to see the smiles and hear the laughter.

“I really enjoy seeing people have a good time,” McCracken said. “Maybe there’s a guy that’s had it pretty rough, is struggling some. If we can just get him to the rodeo and use our last American heritage sport to help him forget his troubles, then he’s had a good night, and we, as a rodeo, have had a good night, too. Laughter is pretty good medicine, and the way things are right now, everybody needs a shot.”