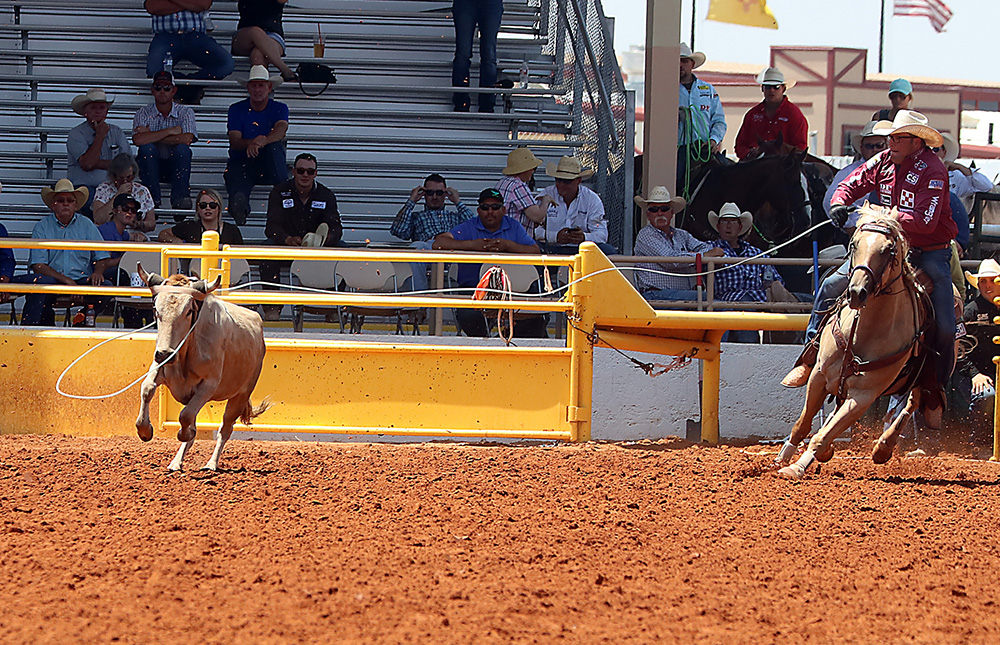 DUNCAN, Okla. – Coleman Proctor has already secured his fifth qualification to the National Finals Rodeo, but he had reasons to stay closer to his property near Pryor, Oklahoma, and focus on rodeos in the Prairie Circuit.

Caymbree Proctor was born July 29, and the team roping-header wanted to be home for that. The rodeo schedule, and his secured berth to compete in Las Vegas in December, was all he needed to make sure his focus was on family, which includes his wife, Stephanie, and their older daughter, Stella.

Now he sits No. 1 in the region heading into the Chisholm Trail Ram Prairie Circuit Finals Rodeo, set for 7:30 p.m. Thursday, Oct. 17-Saturday, Oct. 19, at the Stephens County Arena in Duncan, and he has his baby girl to thank for it.

“The circuit’s always something you’re shooting at,” said Proctor, who sits fourth in the world standings with more than $101,000 in season earnings, $19,000 of which came in the Prairie Circuit, a group of contestants and rodeos primarily in Oklahoma, Kansas and Nebraska. “The money from the circuit finals doesn’t count for the world standings, but it can get you to the RAM (National) Circuit Finals (Rodeo), and the payout is so big, that it’s important to be there.”

Proctor got a big boost early in the 2019 season while competing at rodeos that counted for the new circuit season but also still allowed points for the 2018 world standings – it’s one of those strange rodeo situations that happens in late September; the circuit season must end a month prior to the regional finals, but the world standings count until the final day of the month.

In that case, he pocketed nearly $3,000 when he and his 2019 partner, Ryan Motes, earned the title in Texarkana, Arkansas, an event that – because of its proximity to the Prairie Circuit – counts for the regional standings. A few weeks later in the new campaign, he and Joseph Harrison won the rodeo in Tulsa, Oklahoma, adding another $1,500.

“At the end of last year, my partner and I were going to everything,” Proctor said. “The Prairie Circuit is a unique situation, because we cut off in the middle of September.”

That mad scramble in September 2018 was in an effort to return to the National Finals Rodeo, the sports’s grand championship. He fell just short, finishing 18th in the heading world standings – only the top 15 on the money list at the conclusion of ProRodeo’s regular season advance to the NFR. But it was a boost for him heading into this year’s campaign.

Now he owns a lead of more than $5,000 over the No 2 man, Nick Becker of Garden City, Kansas, as they roll toward southern Oklahoma with hopes of claiming the circuit title.

“When Ryan and I won Lawton, that sure helped,” he said, referring to the $3,849 he earned in early August. “Winning the Prairie Circuit is prestigious. We’ve got some of the best ream ropers in the world in this circuit. It’s neat to be able to strap that Prairie Circuit buckle on. A guy sure has to compete when he gets to Duncan.”

While he has seen great success throughout the season, the biggest thing to come Proctor’s way – outside Caymbree’s birth – was the victory he and Motes had at The American. The duo each pocketed $433,000, but $50,000 of it counted toward the ProRodeo world standings.

“With that, combined with what we’d won before, we had already qualified for the finals,” Proctor said, referring to having enough money to advance to the NFR. “It allowed me the ability to get to come home, have my baby and be home at the house more.

“That part’s been really nice. The rest of the money has been just unfathomable. It’s humbling with what all I won that day. It’s also kind of stressful, because you don’t want to make a mistake with all that cash.”

The bankroll also allowed him to focus on the business of heading, and he used the money to better himself in that.

“I’ve been making investments on horses along the way,” he said. “I lost my great head horse, Carmine, last year. The American sure helped, then whenever it came time for the summer, I had to ride the horses I had the most confidence in. This year has been a lot of hard work we’ve put in. I basically moved in with Ryan for a while so we could practice more.”

Now that his December plans are set, he has another goal he’d like to complete, and that’s to win the Prairie Circuit title. Since Mote competes in the Texas Circuit, Proctor will rope with Jake Clay, a heeler from Sapulpa, Oklahoma. It might be the perfect fit to help Proctor reach yet another goal this season.