Updates hitting the heart of the fair

Home - Uncategorized - Updates hitting the heart of the fair 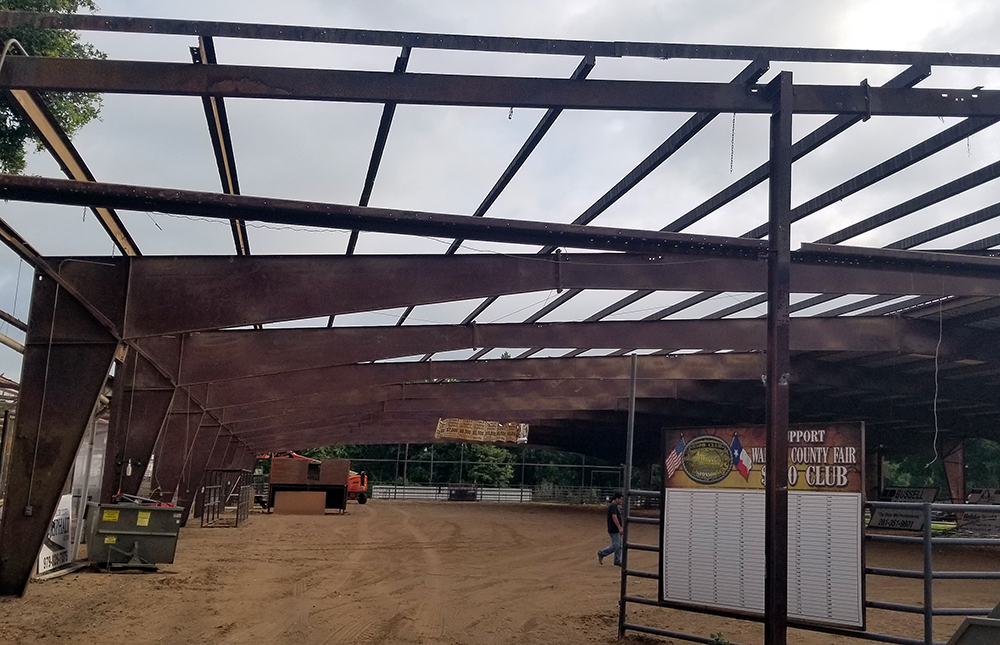 HEMPSTEAD, Texas – In the eyes of the Waller County Fair Association’s board, each step toward improving the fairgrounds is a chance to give back to the community that supports the annual exposition.

“This year, the board of directors approved another half-million dollars toward our capital campaign improvements,” said Matt Hyatt, the fair board’s president. “We stripped the show barn to the structural steel, repainted it, added 8,000 square feet of covered space, and installed new sheet metal onto the whole show barn complex.”

In addition, the group has reworked all electrical aspects of the building, adding another 600 amps of service to bring the total to 1,400 amps of available power. Seven industrial-size ceiling fans have been added to help circulate the air inside the complex. With some strong assistance from board member Steven Pfeiffer, the in-barn PA system will be updated.

“We’re going to redo the storm drains and some plumbing, so we have faucets where needed,” said Cannon Neal, a member of the building committee and owner of Cannon Construction. “Our board chose to spend the money where the heart of the fair is, where the kids are, where the animals are. This will benefit the general public.”

This was the perfect opportunity to make the renovations.

“Over the years, the show barn complex has been remodeled three times, and the last renovation was done in the ’80s,” said Clint Sciba, co-chair of the building committee. “It was time.”

That includes making other facilities a little more comfortable, including adding air conditioning to the two restrooms on the fairgrounds plus a little attention to the Barbara Carpenter Building.

“We’re giving a complete facelift to the two outdoor bathrooms,” Hyatt said. “We were looking at the things we knew needed updating, and we expect to have everything completed by the start of this year’s fair.”

The exposition is set to run Friday, Sept. 27, to Saturday, Oct. 5. Since May 1, volunteers and fair partners completed a great deal of work. While some work was done in-house by volunteers, the rest was left to businesses that have ties to the fair and have been involved in some capacity for years.

“When we have needs, we go to our fair partners first,” Hyatt said. “When we know there’s a sub-contractor that we can use who is associated with the fair, we try to use them.

“For instance, with the electrical work, Waller County Electric had the lowest bid and donated $10,000 back to the fair. Cannon Construction donated endless hours of clean-up, grading, and underground utilities work. They worked on the grounds for 10 days with skid steers and equipment getting everything ready for the fair. Hill Construction did all the metal and erection work. SBS who is a long-standing partner of the WCFA, did what they could to help will all our building components.”

The members of the building committee lean on their backgrounds and business ties to help get things done. The renovations for this year are the last major steps the fair board plans to take for a while.

“As far as big-ticket items, this is the final phase for the time being,” Hyatt said. “We want to do other things but not near this magnitude. We need more bleachers around the rodeo arena, we want a demolition derby arena and, eventually, we want an indoor/covered rodeo complex. It all takes time … and money.”

Every move made is with a purpose, and that’s important. The fairgrounds is an important fixture in Waller County, and with the population expanding northwest of Houston, each step is done with an eye on what we will need in the future.

“We think of our situation as unique,” said Hyatt, who has been on the fair board for eight years, now in his first term as president. “For 51 weeks a year, we have something going on someplace at the fairgrounds. That 52nd week, we use everything we have to its capacity, from water lines to buildings to the septic system. We have everything going full blast.

“We’re trying to fix problems that have arisen and update things. That’s what we need to do at a facility like this.”