Bullfighters earned the job in Duncan 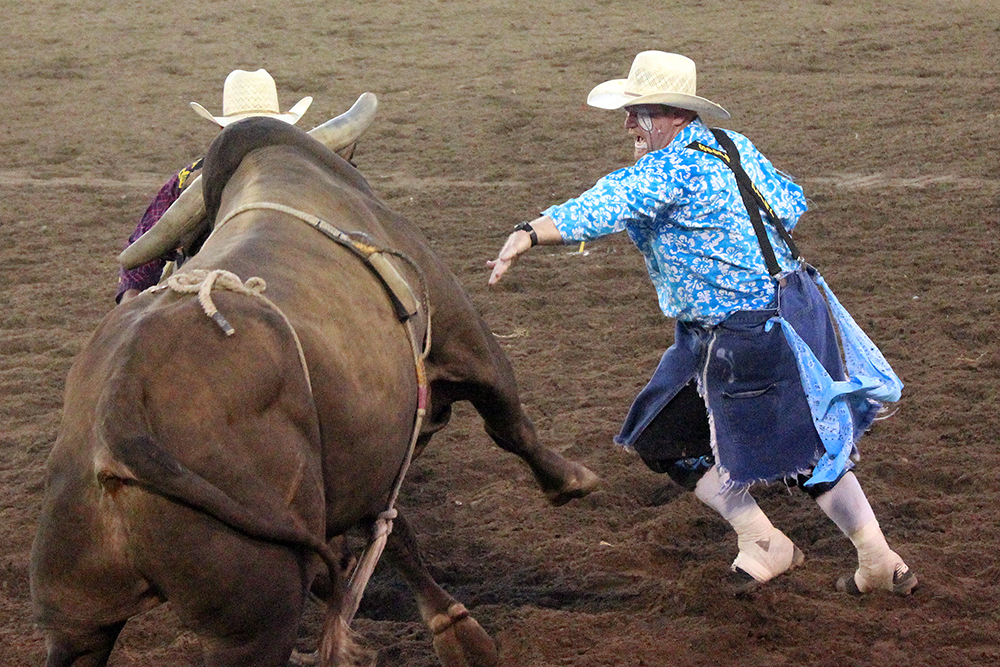 DUNCAN, Okla. – There’s an art to being a professional bullfighter, and Wacey Munsell and Wayne Ratley are perfecting it.

Both will be performing that duty at the Chisholm Trail Ram Prairie Circuit Finals Rodeo, set for 7:30 p.m. Thursday, Oct. 17-Saturday, Oct. 19, at the Stephens County Arena in Duncan. This is Munsell’s ninth selection to help protect bull riders at the regional finale and Ratley’s first, but they’re about to experience something together that many peers would like.

“This is a big deal,” said Munsell of Ulysses, Kansas. “There’s a lot of talent in this circuit, so it makes me feel pretty good hat the talented people want me there.”

Their selections are based on votes from the top bull riders in the region, whose necks and everything else are on the line after a ride is complete, whether that’s after the qualifying eight seconds or before. Even before the bull riders hit the ground, men like Ratley and Munsell step into the fray to keep everyone in the arena out of harm’s way.

“Being selected to work the circuit finals is a great feeling that those guys trust me to be there for them. When I first started fighting bulls, I made a point that I would never buy a sanctioned card unless it was the PRCA or the PBR; my first finals I would ever work would be the circuit finals or the PBR finals.”

It’s quite an honor, given that there are numerous top bullfighters that live in the circuit, made up of rodeos and contestants primarily from Oklahoma, Kansas and Nebraska.

“The Prairie Circuit Finals is the hardest one to get because there are so many good bullfighters that live around here,” he said. “To get that call is pretty humbling.”

Each man works about a half dozen circuit rodeos a year, but Duncan’s championship will mark the first time the two will work together.

“I think it’s pretty neat that we have two guys from Kansas doing this,” Munsell said. “Out of anywhere in rodeo, I’d say the Prairie Circuit has the strongest corps of bullfighters going.”

That includes Munsell and Ratley; Munsell is the elder statesman of the two at just 33 years old. He has worked some of the biggest events in the country, including Denver and Omaha, Nebraska. Last December, he was called into action to work the National Finals Rodeo after another bullfighter, Nate Jestus, suffered an injury.

Ratley is just 28 years old and has been fighting bulls for nearly seven years. He is now in just his second year fighting bulls in the PRCA. He is thrilled to work alongside Munsell.

“Wacey is a veteran of the game and very well respected,” Ratley said. “He’s been selected in the top five in the PRCA for a reason and selected to work the circuit finals for a reason. I hope I can keep going back and working with him.”