Gem State Classic is up for top rodeo

Home - Uncategorized - Gem State Classic is up for top rodeo 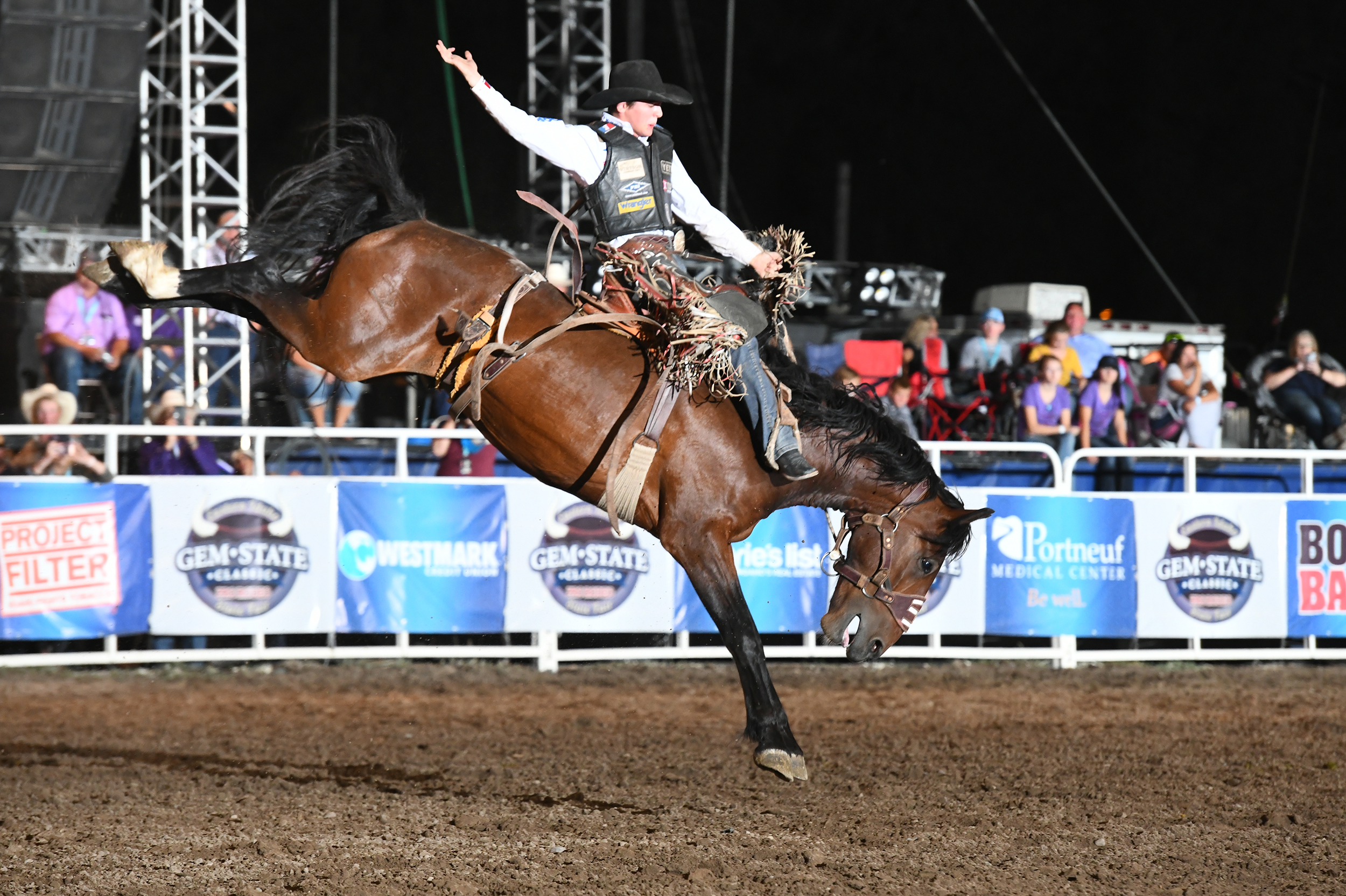 BLACKFOOT, Idaho – For years, the Eastern Idaho State Fair has been recognized as one of the very best state fairs in the country.

Now, its rodeo is following along those same lines. For the first time in its history, the Gem State Classic Pro Rodeo has been nominated for Small Rodeo of the Year, a recognition that it is one of the top five rodeos in its size category and one of the top 20 of more than 600 events in the Professional Rodeo Cowboys Association.

“Our fair has been recognized as one of the top state fairs in the nation,” General Manager Brandon Bird said. “The Gem State Classic Pro Rodeo has exceeded our expectations and has become a shining star in our nine days of grandstand events.”

It was one of many stars in Blackfoot during the exposition.

“The fair has some amazing grandstand events,” said Valorie Smith, chairwoman of the volunteer committee that produces the event. “I think the fair’s history of outstanding entertainment, combined with the 117 years of incredible fair history, is why our rodeo is so good.

“We focus on the cowboys, and I believe that’s one of the reasons we received the nomination.”

For nearly two decades, the fair was host to the Intermountain Pro Rodeo Finals. That changed eight seasons ago when the fair’s board and others pushed for its association with the PRCA, the premier sanctioning body in the sport.

Rodeo of the Year honors are separated into four categories: large indoor, large outdoor, medium and small. Because of its purse, Blackfoot’s annual rodeo is in the bottom category, but it’s far from small. In fact, big names not only made their way to eastern Idaho for the event, they found it to their liking.

“I think the reason the rodeo was nominated was an interesting combination of things,” said Steve Kenyon, the voice of this year’s Gem State Classic Pro Rodeo. “The hospitality was really good, and the livestock was outstanding. The rodeo was on a Monday and Tuesday, and the saddle bronc riding on Tuesday was NFR caliber up and down the line.

“Stetson Wright won the rodeo with a 90-point ride in bronc riding, and Jordan Hansen was 89 points to win the bull riding. You have to hand it to (stock contractor) Powder River; they really brought the livestock.”

Wright is a PRCA rookie who leads the all-around world standings and is second in the bull riding world standings, while Hansen is en route to his second straight National Finals Rodeo; they were just two of many NFR qualifiers who competed at the event.

Riverton, Wyoming-based Powder River Rodeo Co. is now a nine-time nominee for the PRCA’s Stock Contractor of the Year, and it’s been the producer of Blackfoot’s rodeo for eight years. It’s just one of several aspects of the rodeo that have been rewarded through end-of-the-year awards.

Jill Franzen-Loden, the reigning Sound Director of the Year, has received her third straight nomination, and Clay Heger, who worked with Ezra Coleman in Blackfoot, is now a four-time nominee for Bullfighter of the Year.

“When you bring the best, you’re going to get the best out of it,” Kenyon said. “Then when you couple that with a really slick production, you can’t help but have a great rodeo.”

That’s been the war cry for the committee since its inception. From making sure every contestant is greeted to providing the warmth and comforts of home as much as possible, the rodeo is being recognized.

“I’m the mother of rodeo kids, and they have always shared with me that they miss home-cooked meals while they’re on the road,” said Smith, whose oldest sons, Wyatt and Garrett, have both qualified for the NFR. “We want to provide them with that home-cooked meal both nights, and we keep it open late, even after the rodeo’s over so we can feed the committee, the contestants who compete in slack, the contract personnel and the bull riders.

“We cater to the contestants because they are a big part of what we do.”

It’s been proven for years; committees that have gone over and above to pamper the cowboys are recognized. From the Pendleton (Oregon) Round-Up to the San Antonio Stock Show to the Days of ’47 Rodeo in Deadwood, South Dakota, it pays to do the right things year after year. All three of those events are multiple Rodeo of the Year awards in their respective divisions.

“The crowds were amazing,” Kenyon said. “This really was one of the most responsive crowds I’ve ever had the opportunity to announce for. They were fun, they were loud and they really got to it.

“With Jill working her magic on the sound with them, I just thought it was amazing. Lori Fanzen told me before I went that I would love the crowd. It was electric.”

That’s just what Smith and her band of volunteers envisioned when they set sail on this project. It’s taken time, but the crowds and cowboys have made their way to Blackfoot.

Early on, Corey Foster, a fair board director and member of the rodeo committee, saw the vision of where this rodeo could go.

“When the decision was made to go to a PRCA rodeo eight years ago, the fair board’s goal was that with great partners and individuals assisting us this could be Idaho’s Newest, Baddest Pro Rodeo,” Foster said. “That soon became our tag line.

“I think we have turned some heads and changed some opinions of the rodeo since then.”

For seven years, Chad Nicholson called the action inside the arena, telling the tales that interest spectators and contestants. He died earlier this year in an ATV wreck, but his work done at the Eastern Idaho State Fair will long be remembered.

“This should have been Chad’s rodeo,” Kenyon said. “The only reason I was there was because of his untimely passing. I’m sure Chad would have been really proud that this rodeo has a great chance to be the Rodeo of the Year.”