Michelle is the Darling of the circuit

Home - Uncategorized - Michelle is the Darling of the circuit 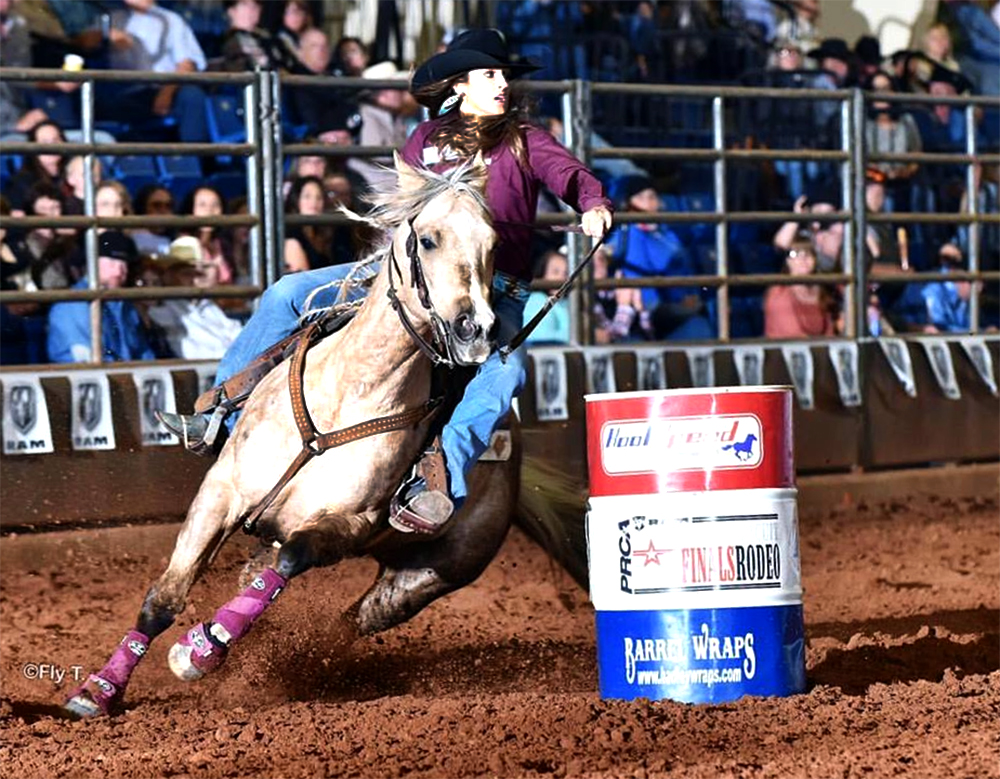 She and her mount, Martini, stopped the clock in 17.17 seconds that night, finishing the rodeo with the average championship and, more importantly, $6,826. That secured her qualification to the Chisholm Trail Ram Prairie Circuit Finals Rodeo, set for 7:30 p.m. Thursday, Oct. 17-Saturday, Oct. 19, at the Stephens County Arena in Duncan.

But she wasn’t done. She also won the rodeo in Phillipsburg, Kansas, that week and followed it with the title in Lawton, Oklahoma, the next. She ended the regular season with $16,114 and ended the Prairie Circuit’s regular season atop the regional standings, less than $600 ahead of the No. 2 cowgirl in the race, Jamie Chaffin of Burwell, Nebraska.

“I’m pretty excited about that, because it’s been neck and neck this season,” said Darling of Medford, Oklahoma. “I didn’t know if I was going to make my count this year. I had to go to the last six rodeos of the (circuit) season, and thankfully I got them in.”

ProRodeo features a unique format. Not only do dollars count as points toward the world standings, but money won in the circuit rodeos counts toward the circuit money list. In addition, cowboys and cowgirls must compete in at least 15 rodeos in the region made up primarily in Oklahoma, Kansas and Nebraska. Darling finished the year with 16 events.

“I got a pretty good start when I won those three rodeos,” she said. “I placed at a couple other pretty good ones, then my stud (backup) horse ended up winning Vinita (Oklahoma). That really made the difference.”

For the most part, though, Darling earned her money on the back of Martini, an 8-year-old palomino mare that Stevi Hillman rode to the National Finals Rodeo in 2016 – Darling was pregnant at the time, so she offered Martini to the Texan, who won nearly $52,000 in Las Vegas that December.

“That horse has a big heart,” Darling said. “She’s got a lot of try and is really gritty. She will never give up.”

Now the tandem will be in a big-time race to the finish for the circuit championship while running through the three go-rounds in Duncan. Not only are Darling and Chaffin in the race, but the next four girls in the standings – Ivy Hurst, Emily Miller, Jeanne Anderson and Leslie Smalygo – all have outside chances to move to the top of the leaderboard.

“This will be my third year to make the circuit finals,” Darling said. “The first year I was there, I won the first round, placed in the second round and, in the third round, I tipped a barrel to win it. Last year I didn’t run my good horse, but it was a good experience.

“This year I’ll be running my good horse. My goal is to win it and hopefully make the RAM National Circuit Finals Rodeo.”

Only the year-end and circuit finals-average championships earn the right to compete in Kissimmee, Florida, next spring, so it’s a big deal to do well in Duncan.