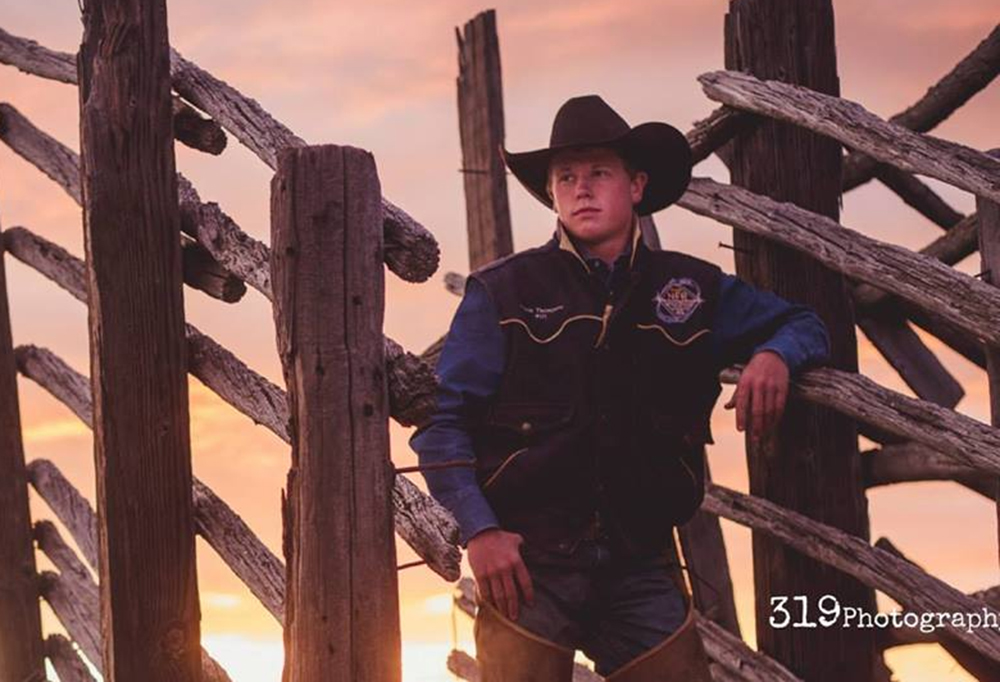 “I’ve done a lot of thinking about it and questioning why I haven’t made the college finals yet, and at the end of the day, I realized that I just needed to be more aggressive,” said Thompson, a senior from Cheyenne, Wyoming. “Not very often do we practice just to catch; we are aggressive in practice.

He’s a header, and this past weekend at the Southeastern Oklahoma State University Rodeo in Durant, he partnered with heeler Sam Goings of Oklahoma Panhandle State University to win both rounds and the overall team roping title.

“It’s a great start to the year,” said Thompson, who transferred this year from Western Oklahoma State College. “I feel like I got the ball rolling. I’ve never had the college season I really wanted, and this is my last shot at it. It felt great to show up, have my horse do good and for me to do my job and come out on top.”

The tandem took advantage of a good steer to win the first round, but part of that was the change in mentality when it came to the cowboy’s approach to his game.

“I didn’t take the highest percentage shot, but the last three years that I’ve come to these rodeos, I’d always take safety’d up,” he said. “After the first rodeo of the year in Colby (Kansas), I decided I wasn’t going to lay off too much.

“That steer had his head up, and my man did a great job to finish it up. In the short round, we drew great again, but I knew I needed to make sure I got out without breaking the barrier.”

In college rodeo, contestants earn points for how well the place in rounds and the average, with 60 points going to the winner and 10 points for sixth place. By dominating things in Durant, Thompson earned 180 and now has the lead in the Central Plains Region’s heading standings.

“It’s really nice to be ahead of the game this early instead of feeling like you have to battle back the whole time,” he said.

He wasn’t the only Northwestern header to find success at Southeastern. He was joined on the leaderboard by Camden Hoelting, who finished third overall while roping with Michael Esquibel of Northeastern Oklahoma A&M.

For the women, breakaway roper McKayla Alliston had the highest point earnings by finishing fourth overall, while defending national champ Taylor Munsell added to her total; she is fourth in the region. Megan Corr added points in goat-tying, while Sierra Schott scored in barrel racing.

For Thompson, it’s just the next step in what he hopes is a solid year. He spent the first three seasons of college rodeo in Altus, Oklahoma, before transferring to Northwestern. He made the move for one reason: “They win,” he said.

“It’s a great program, and Stockton (Graves) is a guy that’s won and has been at the very highest level. I don’t care if it’s football, baseball, basketball or rodeoing, when you’re around a guy that’s successful and can learn from him, that’s what you do. I wanted to get around Stockton and get around some guys that really work at it.”

He knows a bit or two about being around greatness. He is the son of Frank Thompson, the 2000 world champion steer wrestler. In addition to team roping, Zane Thompson also ropes calves and wrestles steers, and he’s carrying on a family tradition quite well.

“Ever since I was a little kid, I knew that if you wanted to rope calves or team rope, you had to go south (from Wyoming),” Zane Thompson said. “I remember being 12 years old and knowing that when I go to college, I was either going to Oklahoma or Texas.