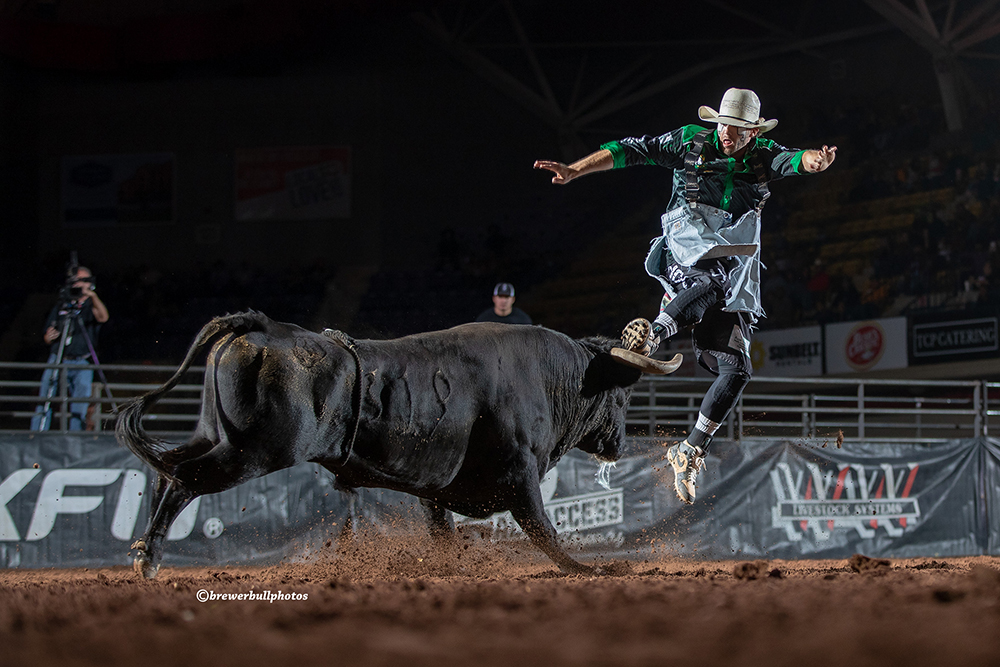 Nebraska man steps up big to win BFO title in Waco, moves closer to the leaders

WACO, Texas – As the 2019 Bullfighters Only season rolls toward its championship event, Beau Scheuth is at the right place mentally and physically.

The Nebraska man proved it on Sunday by winning One HOT Bullfight in conjunction with the Heart of Texas Fair and Rodeo in Waco, adding $5,000 to his season earnings and securing his spot among the top 12 men heading into the BFO Championship at Tropicana Las Vegas in December.

“This was pretty crucial for me,” said Schueth, who missed two months of competition because of an injury suffered in the spring in Ada, Oklahoma. “I wasn’t able to go to as many bullfights, so these last few big events at the end of the year help solidify my spot and creep closer to the top three or four guys. I want to keep moving up and get within striking distance of a world title.”

Schueth was back to his consistent ways in Waco, winning his opening. One HOT Bullfight featured nine athletes competing in three-man brackets, the winners advancing to the Hooey Championship Round. Schueth eliminated three-time world champion Weston Rutkowski and Dayton Spiel by posting the highest-marked fight of the day, an 88-point bout against a 1,300-pound paint bull named Padre from Penthouse Fighting Bulls.

“I was the third guy out in our round, and both Dayton and Weston had really good fights with really good bulls,” said Schueth, who sits seventh in the BFO Pendleton Whisky World Standings. “I knew as long as I didn’t get caught (by the bull) and stayed away from the fence, I’d have a pretty good shot.”

He was joined in the final round by Aaron Mercer and Dekevis Jordan, the latter of whom finished second in his bout but advanced due to an injury to the winner, Chance Moorman. Mercer is a newcomer to the BFO in 2019, but he has taken to freestyle bullfighting quickly. He sits No. 1 in the standings with $40,850 – a $4,370 lead over the runner-up, Weston Rutkowski.

“The crowd was unreal,” Mercer said. “It was one of the biggest crowds that I’ve ever seen. It was packed, and the athletes showed up. It’s getting close to the end of the year, so we’re down to the final couple events to see who’s in the top. Everybody is bringing their A game.

“It was a good bullfight.”

It’s what the fans have come to expect at a BFO, especially the stand-alone events that showcase the top men and the elite Spanish fighting bulls that make it a dangerous clash in the dirt. There are just three more events remaining in the regular season, including a Wrangler Bullfight Tour stop this coming weekend in Arcadia, Florida.

The final two will be stand-alone events: the BFO Kent Cup in Seattle, Washington, on Oct. 26 and the Speedway Series Finale at the Texas Motor Speedway in Fort Worth, Texas, on Nov. 3.

“These are classic stand-alone events, and they’re big for us,” Schueth said. “In Waco, every round was tough. Everybody had a shot. It just came down to how your bull was and how you handled him; that’s the way it should be.”

Schueth did more than just handle his short-round bull; he also gained a bit of retribution.

“That was the bull that laid me up in Ada,” he said. “’I knew it was going to be a good fight. I wanted to get some revenge for him knocking me out of competition for two months. I was happy to be matched up with him, because he was a pretty good bull.”

Scheuth finished with 87 points, just a half point better than Mercer in the Final Round.

“I want everybody to be 90,” Mercer said. “You always have that competitive factor that you want to win, but Beau turned it on and made a good fight. I want all the guys to fight their bull and put on a good show.

“Do your best and cheer for your boys. These people are a big part of why I’m here. I wouldn’t have the drive to be a world champion without them. I’ve never worked harder in my life. I’m committing myself to work out every day, whether it’s a run down the road or three hours at Fit N Wise. I have this drive, and it’s because of the people around me.”