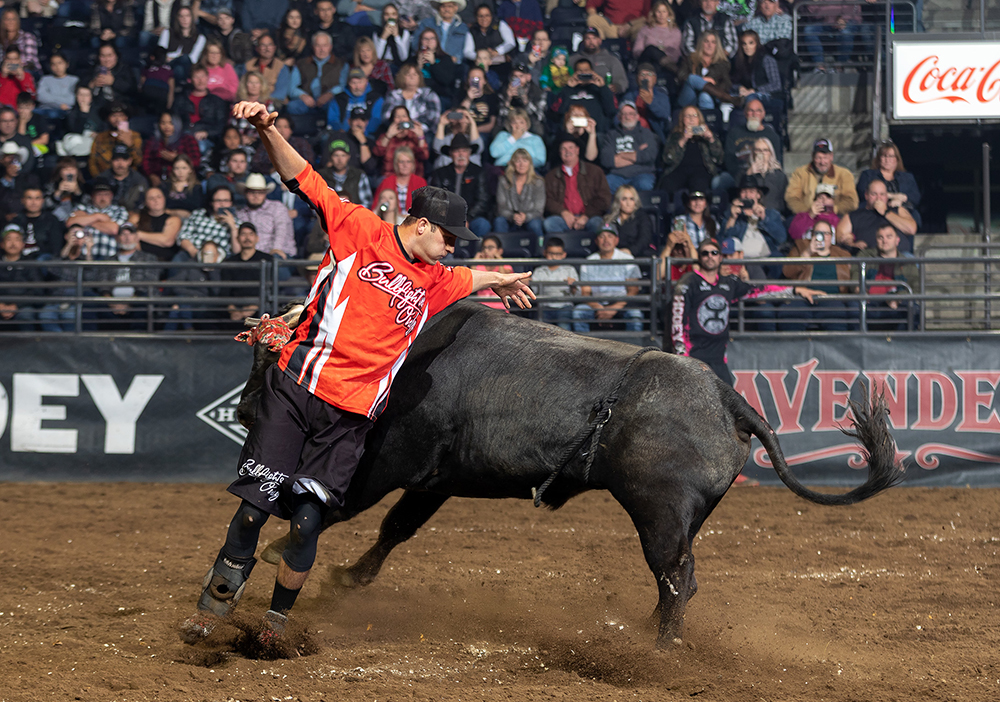 KENT, Wash. – A few months ago, Aaron Mercer left everything he knew at home in Calgary, Alberta, and opted to chase his dreams in the world of professional freestyle bullfighting.

“I’ve pretty much given my summer to Bullfighters Only,” said Mercer, who is making it pay off in a big way. He won his ninth event championship this past Saturday by claiming the inaugural BFO Kent Cup, adding $12,000 and pushing his season earnings to $56,350.

He is firmly planted as the No. 1 man in the Pendleton Whisky World Standings and owns a lead of $19,620 over the second-place bullfighter, three-time world champion Weston Rutkowski.

“This feels great, because I’m going into the finals sitting first,” Mercer said, referring to the 10-day, year-end finale set for Dec. 5-14 at the Tropicana Las Vegas. “The money at the finals is going to be big, so it’s going to be a dogfight in Vegas. You don’t want to take your foot off the throttle now. I’ve got a target on my back, but I’m ready to dodge bullets.”

He dodged several in Kent, which featured a field of 14 bullfighters, several of whom have played on the biggest stages in the game and a couple of up-and-comers who are out to make names for themselves. In fact, the Hooey Championship Round was highlighted by Mercer, veteran Beau Schueth along with two rookies, Anthony Morse and Austin Ashley.

The Canadian came away with the title after putting together an 88-point bout, just a point better than Scheuth, who collected $5,000 and moved up to sixth in the world standings. Ashley finished third with an 86, while Morse, of nearby Port Orchard, Washington, was unable to complete his final-round bout.

“It was an awesome bullfight,” Scheuth said. “It was a pretty big venue, and for the first time being there, the crowd came out and was really into it. The bulls were phenomenal, and all the guys showed up and laid it all out on the line.

“You always want to win, but second place is better than a lot of other things. The money counts toward the standings, so every little bit is important.”

Mercer has had more than his fair share of victories this season, but he considered the title in Kent to be his biggest. It’s been a long way to the top for the Albertan, who spends most of his time on the road.

“I’ve pretty much made my home at Justin Josey’s van and a hotel here or there,” he said. “I’ve never spent this much time on the road, so it’s definitely a change. I’ve got a friend in damn near every state, so I’ve got a home wherever my friends are.

“No matter where I am, I try to find a gym. There are no excuses. If you want to work out to be on top, you’re going to do it. I’ve been driving this hard because I have a goal.”

In the process, he has gained recognition and a growing support for his craft. Not since Greg Rumohr in the 1980s and ’90s has a Canadian made such a splash in freestyle bullfighting – Rumohr, from Fort Saskatchewan, Alberta, was a Wrangler Bullfight Tour legend who finished second on the tour three times.

Mercer is carrying the Canadian flag in freestyle bullfighting along with another Albertan, BFO founder and CEO Aaron Ferguson. While the latter handles BFO’s business, Mercer is taking care of things inside the arena, and the Maple Leaf flags are flying high because of it.

“I think I came along at the right time, and having Canada’s support is unreal,” he said. “I’ve got people from British Columbia, Alberta, Saskatchewan, Manitoba and the entire nation that are cheering me on. It’s pretty gnarly that they’ve got my back.

“But I’ve got a ton of support down here, too. It’s not just Canada that’s got my back. Everybody that’s been supporting me is making me push that much harder.”

BFO concludes its regular season with its Speedway Series Finale, set for 11 a.m. Sunday, Nov. 3, at Texas Motor Speedway in Fort Worth, Texas. It is the final rung on the ladder leading toward Las Vegas in December.

“Everybody in that bracket in Kent was tough to beat, so you had to let it all hang out,” Mercer said. “You’re not going to win a bullfight if you safety up. You have to have the mentality that I’m going to win no matter what. That means if you take a hooking in the first two seconds of the bullfight, you get back up and go back to it.

“This isn’t a little boy’s sport. This is Bullfighters Only.”