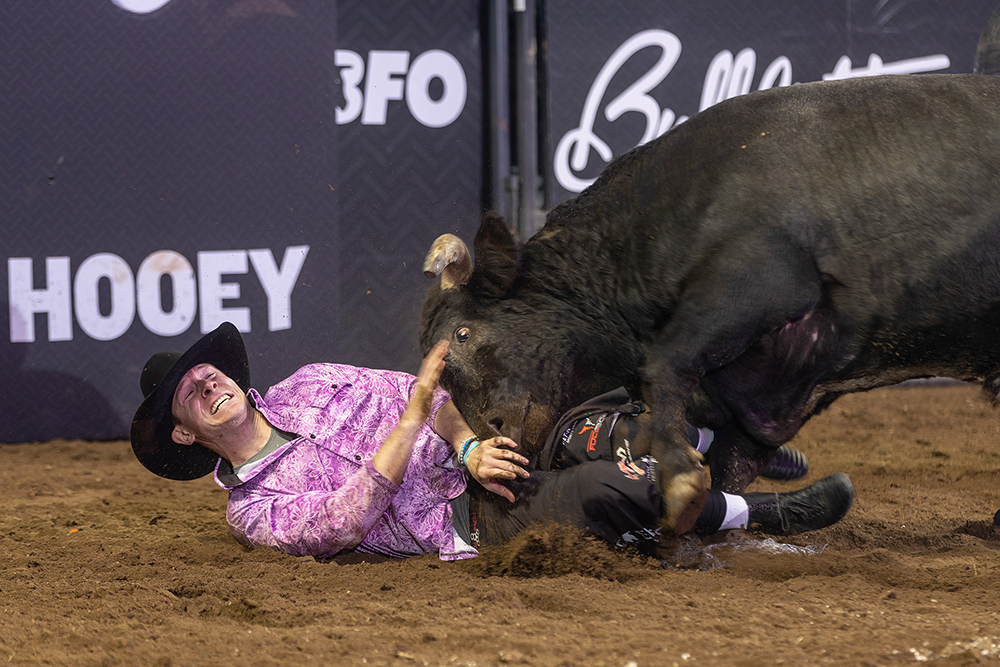 North Carolinian is looking to turn things around in Fort Worth

FORT WORTH, Texas – Kris Furr is a proven winner in Bullfighters Only, but he hasn’t kept up his end of the bargain as of late.

“I think I’m trying too hard to win,” said Furr, the fifth-ranked man in the BFO Pendleton Whisky World Standings. “I have been watching (Aaron) Mercer light it up and watching Beau Schueth win about everything he’s gone to lately, and last week I definitely put too much pressure on myself instead of just being me.”

“I’m just going to keep going at them,” said Furr of Hamptonville, North Carolina, now living in nearby Decatur, Texas. “I like the Speedway Series events. They are early in the day, so it’s easier to keep your mental focus. I wake up, fight a bull, make my moves, then go watch the race.”

Texas marks the final event of the Bullfighters Only regular season and will feature BFO’s best battling for the checkered flag. The athletes are also using the event to position themselves for the season-ending championship, set for Dec. 5-14 at the Tropicana Las Vegas.

All are chasing Mercer, a Canadian who has led the standings for much of the season. He has a lead of nearly $20,000 over three-time world champion Weston Rutkowski. Since the BFO was established, Rutkowski has been the man with the target on his back. Now he’s taking aim.

“It’s new territory, except for 2016, when I was in a position where I was chasing,” said Rutkowski of Haskell, Texas, who also lives in Decatur. “It doesn’t change the aspect of the way Vegas pays out. It’s not a great feeling for me, because I’m a guy that wants to win every event I go to.

“The good news is Vegas has a lot of money up for grabs, and it’s a situation I’ve been in heading to Vegas.”

Like Furr, he plans to take a step back in time and refocus his energy as he closes out the regular season and sets his sights on the championship. He knows the next step is performing well before the crowd at Texas Motor Speedway.

“This is going to be another event to take advantage of,” Rutkowski said. “It’s one I need to win and put on some good, fundamental bullfighting. I can’t worry about whether I beat this guy or beat that guy. It’s going back and putting in the time to prepare and producing the type of bullfight I can when I get into that arena.”

Just a week ago, most of the combatants in this weekend’s field were in northwestern Washington for the inaugural BFO Kent Cup. Upon returning home, they went back to the work of preparation because they understand the importance of having a sound mind and body is in the world of freestyle.

“The big thing is staying in shape and staying in the gym,” said Furr, one of several men who utilize the training opportunities at Fit N Wise Rehabilitation and Performance Center in Decatur. “I want to stay strong and stay fast, keep my cardio up and keep my footwork up. When you are in peak physical shape, then you can do anything.”

He also is utilizing a focused regimen at home.

“I want to stay zoned out and keep my mind totally on what I’m doing,” he said. “I’m only worried about what’s going on in my world. I stay in my lane and think to myself. I’m kind of selfish when it comes to fighting bulls; it’s about me, because it’s about the trust I have in myself.”