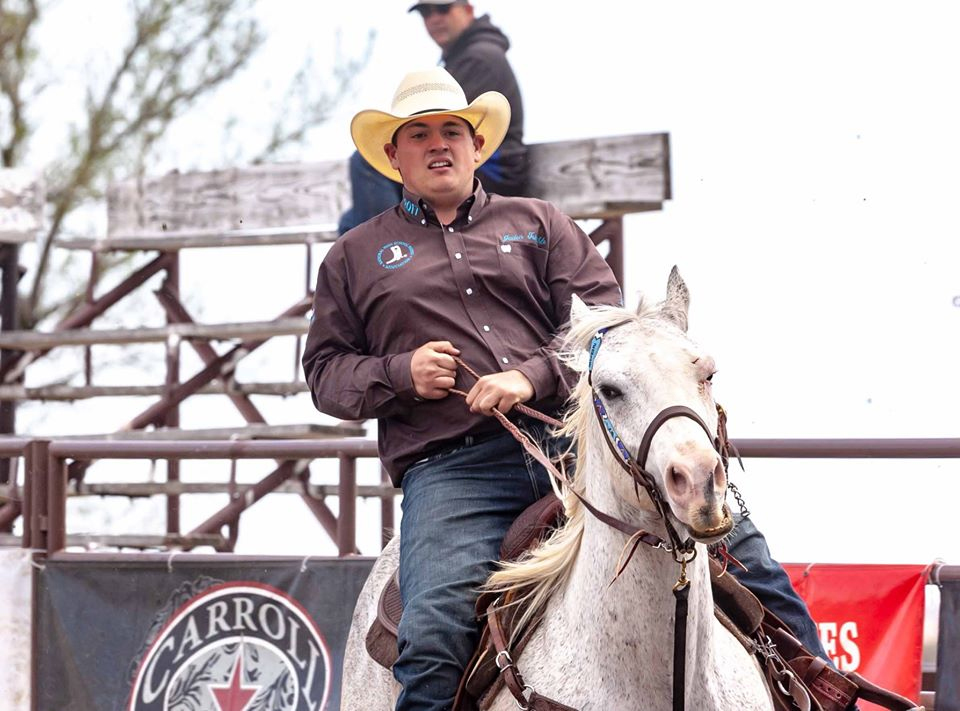 ALVA, Okla. – When he was searching for a college home, Jaden Trimble was looking for the right environment.

He’s found it at Northwestern Oklahoma State University, and he proved it this past weekend at the Rangers home rodeo. Trimble, a freshman from Coffeyville, Kansas, partnered with heeler Marley Berger of Coffeyville Community College to finish second in team roping, earning big points in the process.

“When you’re trying to be good at what you do, you want to be around people with a winning mentality,” he said. “People that go to school here practice hard and know how to win. That’ll make you a winner, too.”

Trimble and Berger stopped the clock in 7.1 seconds to finish fourth in the opening round, then blistered a solid run of 6.0 seconds to win Saturday’s championship round and finish second overall. They were just four-tenths of a second behind the winners and earned 140 points. That moved Trimble to sixth in the Central Plains Region’s heading standings.

“It was very special to do well at this rodeo since it was my first Northwestern rodeo,” he said. “I did alright at Colby (Kansas, the first event of the season), but I like this one better because it was our hometown rodeo.”

He’s made himself quite comfortable since moving from southeast Kansas to his new hometown. Just 19 years old, he found joy in what was offered when he toured the campus with coach Stockton Graves last year.

“I wanted to find a place where I could rope every day and still go to school, and this college just had more of a welcoming atmosphere,” Trimble said. “I was welcomed from the get-go. All the teachers I met were very open and tried to help me from the start. Once I told them my goals, they immediately sent me to the right people to talk to.”

He was the leading force for the Rangers over the weekend, but fellow header Zane Thompson of Cheyenne, Wyoming, utilized his strong finish to move up the region standings. Roping with heeler Sam Goings of Oklahoma Panhandle State University, Thompson finished third in the opening round with a 6.6-second run.

In the final round, a single-leg catch resulted in a five-second penalty, but the tandem still finished with an 11.4-second run to finish fourth in the round and overall. Thompson’s 100 points earned at the Northwestern rodeo pushed him to a slim lead in the circuit.

Another region leader, steer wrestler Bridger Anderson of Carrington, North Dakota, snuck into the short round with a 5.4-second run, then placed in both the short round and average. He owns a 305-point lead over the field, but Jace Rutland of Harrisonville, Missouri, placed in both rounds and the average to move into the top 15 in the region.

Saddle bronc rider Denton Mars of Freedom, Oklahoma, finished third in the first round; none of the bronc riders earned a qualified ride in the short round, so his 66-point ride held up for third overall. He is 10th in the circuit standings.

For the women, barrel racer Kayla Wilson of Quincy, Illinois, placed fourth in the final round and finished in a tie for fifth in the average. Goat-tier Meghan Corr of Rapid City, South Dakota snuck into the short round, where she stopped the clock in 6.4 seconds to finish in a tie for third in the round; her two-run cumulative time of 13.2 seconds was good enough for fourth overall. Megan Turk of St. Paul, Nebraska, finished fifth in the first round to earn points.

“There were some struggles overall, but I think for the circumstances, we did fine this weekend,” Trimble said. “I think this is the best team in the region.”

The Rangers will have a three-month break before its next rodeo in the spring semester, but that doesn’t mean the work is done this fall.

“For me, I find a place to practice and go to different ropings to stay sharp,” Trimble said. “We’re not going to back off, and I think that’s the key. As long as you don’t back off in the offseason, you’re going to stay ahead of the competition.”