After missing a year, Aus eager for NFR

Home - Uncategorized - After missing a year, Aus eager for NFR 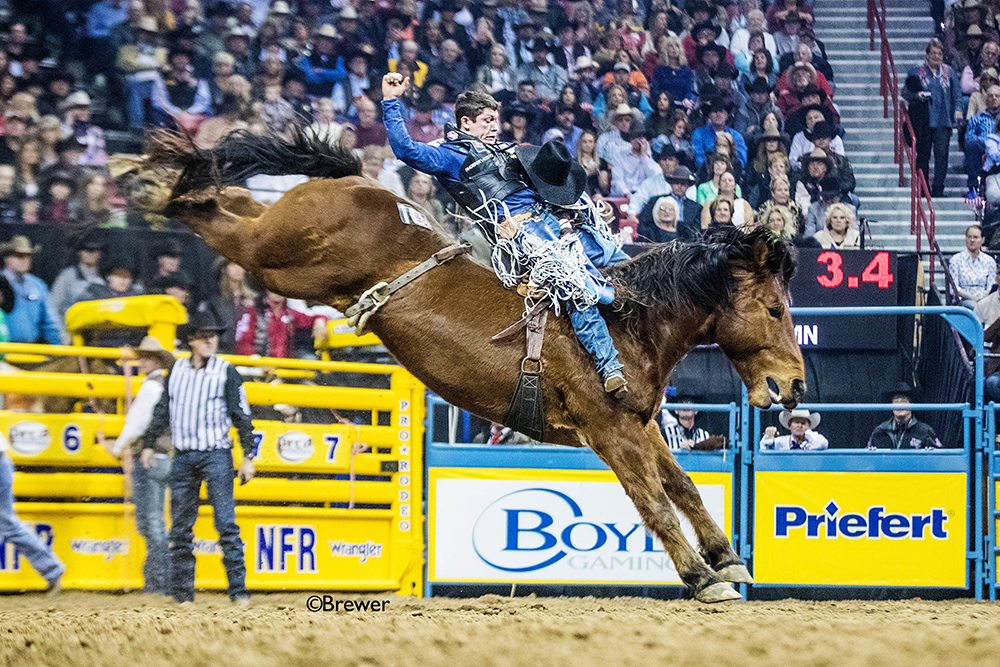 GRANITE FALLS, Minn. – The support system Tanner Aus has had through his 10-year career has been instrumental to his success.

The number of supporters is growing, and he has a lot to do with it. Aus and his wife, Lonissa, are expecting their second child next spring. It will be a nice addition to go along with Bristol, who was born a year and a half ago.

“I honestly think the key to my success this year was just the support,” he said as he prepares for his fourth qualification to the National Finals Rodeo, the sport’s grand finale set for Dec. 5-14 in Las Vegas. “First and foremost, I’ve got my family. My wife kept me going, kept me out on the road. She’s supported me through and through and keeps me focused.

“She supports my dreams, and I’m thankful for that. My mom and dad, too, even at this point in my career, they encourage me to keep going. I’ve also got my traveling partners, Ty (Breuer) and Steven (Dent); they’re good guys to have in the rig, and they keep a positive attitude.”

“I’m just a product of the people who choose to support me, and I’m very grateful for that,” he said. “I have goals and dreams and put in time outside the arena, but if I don’t have people pushing me, I don’t think I’d make it on my own.”

He made it by earning $81,595 through the rigors of the regular season. That meant he will head to the NFR in 13th place, a far cry from his 2018 season that saw him just miss the chance to play for the biggest pay in the game. He sat out part of the injury with an injury and finished 18th in the world standings; only the top 15 on the money list in each event advance to the year-end championship in the City of Lights.

“That was a huge motivator,” said Aus, a Granite Falls cowboy who utilized rodeo scholarships to attend both Iowa Central Community College and Missouri Valley College; he won the collegiate national championship attending the latter in 2012. “It was one of those times when you take a step back and look at your career, then you realign your goals.

“It’s hard on your spirit not making the finals, then I finished on the bubble this year. I know that if you miss the NFR two years in a row, it’s hard to get back, so I was hard charging to make it this year.”

Charge he did. He earned 10 event titles, including big payouts in Nampa, Idaho, and Lovington, New Mexico. Still, his biggest title came at the Calgary (Alberta) Stampede, which paid its winners $100,000 in a tournament-style shootout. In all, Aus pocketed $115,000, but because Calgary is not sanctioned by the Professional Rodeo Cowboys Association, the money didn’t count toward the world standings.

“I was a late replacement, and I took a little time off from the PRCA to go up there,” he said. “I felt like I couldn’t turn down that opportunity. It panned out for me, and it was a great week. I had my whole family up there.

“While the money didn’t count, it does provide you a little freedom financially to rodeo on. It was also a major boost in the mind game. I felt like I was riding well leading up to it. I spent a lot of time training in the spring and right through June. I drew well, and I left Calgary pretty darn confident. I went to Nampa right after that and was 91 points in the short round. It was a really good couple of weeks there.”

It all added up to another trip to Las Vegas for ProRodeo’s grand championship. Aus doesn’t take that lightly. He knows how important it is to be part of the richest rodeo each year, where go-round winners will pocket $26,231 for each of the 10 nights. Over his three previous NFRs, he has earned more than $260,000 – not a bad total for 30 days of work.

Each of those experiences will pay dividends at this year’s finale.

“The biggest thing is knowing the routine,” said Aus, who credits much of his success to his sponsors, Granite Falls Dairy Queen, Jug Waterers, Carroll Spur Co., Phoenix Performance Products and Wrangler. “The first year I went out there, the bright lights, the action and the extracurriculars all held my attention for about half the NFR before I realized the place can wear a guy out. Now I go out there and get that Vegas life out of my system in about a day.

“I’m excited to have my family out there, with my mom, dad, wife and daughter there the whole time,” Aus said. “Where we live, my wife has a full-time job. I’d like to take them on the road with me more than I do, but I can’t, so the fact that we get to spend 15 days together in one place and we’re at the greatest rodeo in the world is what means the most to me.”