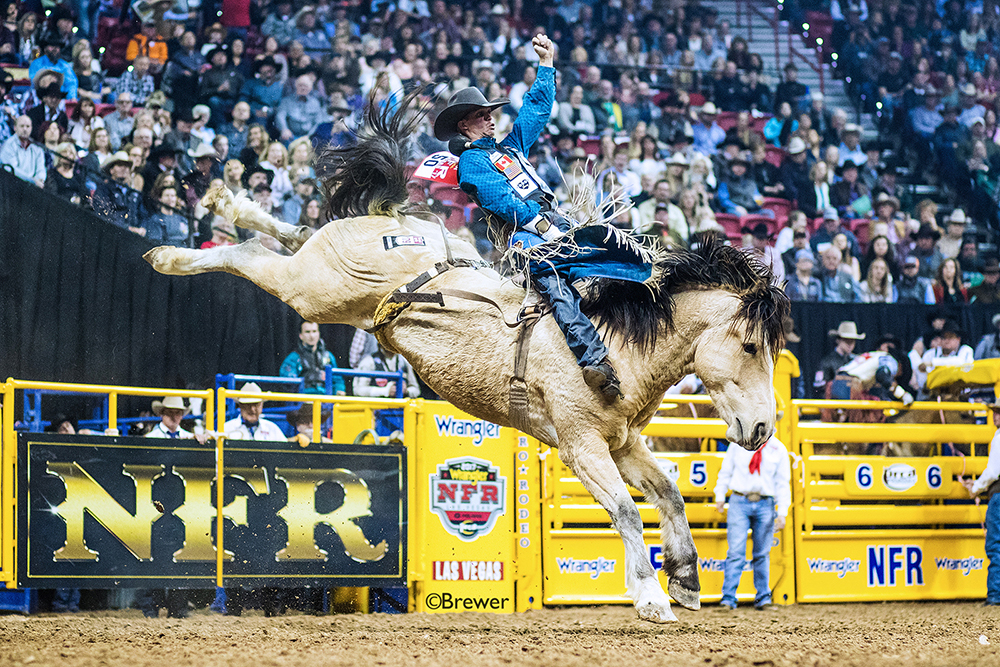 INGLIS, Manitoba – For most professional athletes, there’s a playoff system before competing for a world championship.

At the CFR in October, Larsen rode six horses for a cumulative score of 522.75 points to win the aggregate title. It was highlighted by a 90-point ride to win Round 5 and an 89.5-point ride to win the sixth round, and, more importantly, the $60,345 he earned that week was more than any other competitor in Red Deer, Alberta.

“I was drawing good horses all week,” he said. “Even though you bring the cream of the crop to the NFR and the CFR, you’re not going to win on every horse that’s going to be there. Any of those guys in the locker room are just as deserving to win it, but I was more fortunate that week the way it all worked out.”

It marked the second straight year he’d earned the average title, but the bigger news for Larsen is what he accomplished through the regular season in the Professional Rodeo Cowboys Association. In all, he heads to the NFR with $173,422, his best season ever in ProRodeo. Still, he sits third in the world standings, just $8,500 behind the leader, Clayton Biglow.

“There’s so much money to be won in the sport of rodeo right now,” said Larsen, who earned college national titles while attending the College of Southern Idaho and Oklahoma Panhandle State University. “It’s propelled to another dimension since the first year I made the finals (in 2015). I think rodeo is going in the right direction, and I think it’s going to continue to go in that direction.”

Through the campaign, he earned nine event titles, with the biggest and most far-reaching being his championship at The American, which was in its first year of being sanctioned by the PRCA. Winners in each event were awarded $100,000, with half that counting toward the world standings.

“That was huge,” he said. “I’ll admit that The American not only was big as far as money won, but going through on with that kind of confidence and that kind of high definitely helped me through the rest of the season.

“I think it made me a better competitor. I didn’t want to be the guy that made the NFR because of one rodeo; I wanted to do as well as I could at every single rodeo I went to.”

His point was made. Of his regular season earnings, $123,422 came from rodeos other than the big one in Arlington, Texas. He and Alexa were able to use some of money to purchase land in Harrison, Nebraska, not far from their home in the state’s panhandle.

“When I won San Antonio, it was the second time to win it,” he said. “San Antonio is one of my favorite rodeos to go to. The committee does a lot of work to cater to the cowboys. I think it’s just the atmosphere there. You get on really good horses, and the format itself is pretty forgiving as far as qualifying and making it in to the short round.”

That gave Larsen a nice lead heading into the rush of summertime rodeos. By early May, he had pocketed $86,000.

“I treated my season like I hadn’t won that money,” said Larsen, who credits much of his success to his sponsors, Rock & Roll Denim, Rieta Creek Scoreboards and Tim Cooper Custom Hats. “I feel like if I concentrated on that, I would have relaxed a little bit more or maybe not tried quite as hard. I love the sport of rodeo and all that it’s offered me, but I wanted to just go to rodeos and get on bucking horses, because that’s what I love to do.

“You want to to feed off the feeling of winning The American and San Antonio, but you have to have your mind in the right spot, and that’s what it came down to.”

As happens in rodeo, there were plenty of gut-check moments through the season, but his early-season earning helped divert much of that. Of course, growing up on a ranch in Manitoba also played a roll in knowing how to overcome adversity.

He was born in Alberta but the family moved two provinces east when he was young. His father, Kevin, runs the ranch, and his mother, Wanda, runs a barbershop in nearby Roblin, Manitoba. His only sister, Cassie, is the oldest of four siblings, and she’s a hairdresser like their mom. He has an older brother, Tyrel, and a younger brother, Kane, who also compete in rodeo.

Family is vital to Orin Larsen, and their support has been a backbone for his successes over the years. He has been with his wife for several years, though they just celebrated their two-year anniversary in October. All may not be in Las Vegas with him for those 10 magical nights of the NFR, but he knows their support will be on his side.

“Lex knows me better than I know myself, and she helps me in every way possible,” he said. “When I was struggling this year, she asked me what I was thinking and what I was doing in 2016 when I was doing so good. I said, ‘I just did the basics.’

He hasn’t been in his own way all season, and he proved at the Canadian finale that he’s not allowing the pressure of the postseason to stand in his way. Money is vital in rodeo, and it’s not just for paying bills or making investments. Dollars equal points, and the contestants with the most money won in each event will be crowned world champions.

“My success at the CFR – and through the year, really – came down to horsepower and my consistency,” Larsen said. “I had consistency in my riding and consistency in doing my basics. That’s what’s going to win you a check nine times out of 10.

“The money in rodeo right now is just insane, and I’m getting paid like this riding bucking horses. It’s weird. I’ve had a very good support group with my wife, my family and my friends. I’ve been straying strong to my faith, and I think that’s been huge to letting me do so well this year.”