Gordon ready for his first NFR 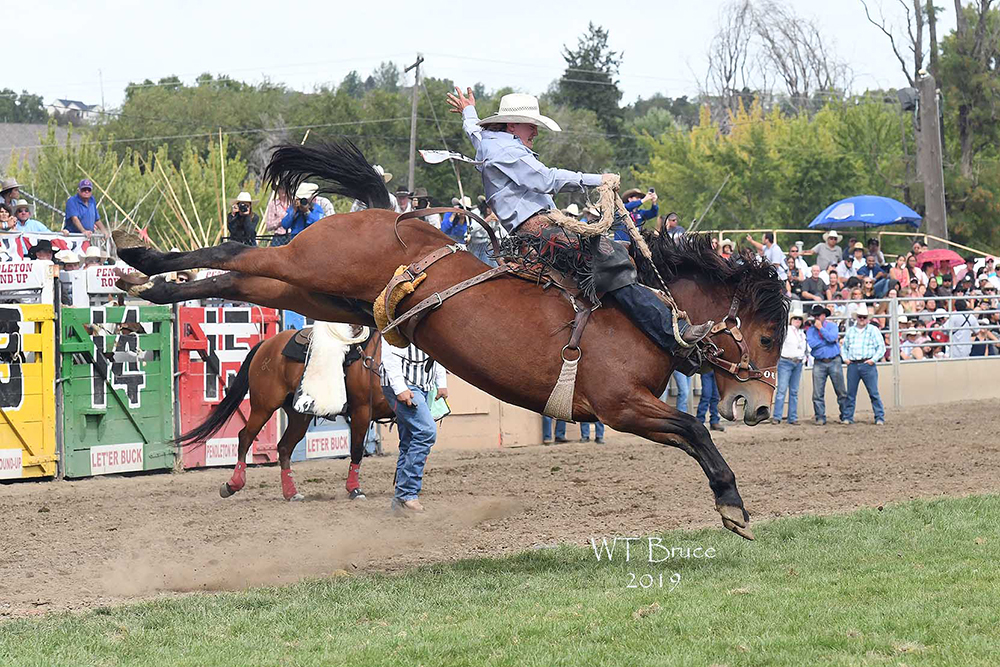 COMANCHE, Okla. – Colt Gordon firmly believes in the old cliché: If you want to be successful, surround yourself with winners.

It proved to be right for the young saddle bronc rider. He spent most of his 2019 season traveling the rodeo trail with reigning world champion Wade Sundell, and the lessons learned in that classroom on the highways of rodeo paid off: Gordon has earned his first bid to the National Finals Rodeo.

“The NFR is what everybody works for,” said Gordon, 22, of Comanche, a community of 1,600 people in southern Oklahoma. “It’s a dream come true, and I’m excited and ready to get there and get started.”

He finished the regular season with $91,071, good enough for 14th in the world standings. That’s important, because ProRodeo’s grand finale features only the top 15 contestants on the money list. A year ago, Gordon finished 21st, so he made the necessary adjustments to be in Las Vegas for the championship, set for Dec. 5-14.

“I think the biggest difference was the group I traveled with,” he said of Sundell and Tegan Smith, another young bronc rider. “The experience we had with Wade, him knowing when to enter, what rodeos to go to and when the good horses were going to be out was a bit help. It was a really good opportunity to surround myself not only with him, but also Tegan. Both guys were great all year.”

Sundell was well on his way to a ninth NFR qualification when he suffered a serious injury in late August. He was hospitalized for weeks and was unable to complete the season. He still finished the season 24th. Smith, who placed third at the 2019 College National Finals Rodeo, finished the ProRodeo season among the top 30.

“The great thing about our rig is that when a guy is having a bad week, somebody in the rig is winning, so we’re all winning,” Gordon said. “Everybody’s really positive, and nobody ever gets down. It’s a race to win in that rig. We support each other, but we sure like beating each other. We do all sorts of things to make us all get better.”

That’s the key to the young cowboy’s success, but so has his work ethic. He was raised around ranching in Comanche and found rodeo to his liking.

“I got bucked off a lot, but you just keep getting back on,” he said of his upbringing. “That’s all I did before, day work and helping around a few of the ranches around the house. I started out riding colts and being around it, then getting around the rodeo scene a little more.

“I started off getting on a few ranch broncs, then I got a bronc saddle and just jumped into it.”

Gordon began competing as a young boy, team roping and roping calves. His father, Andy, rode bulls and still ropes, and his mother, Krissie, was a barrel racer who also ropes. His brother, Dylan, is a ProRodeo team roper, and his uncle, Gary Ledford, was a 15-time NFR qualifier in tie-down roping.

“I roped calves for a little bit, but it wasn’t for me,” Gordon said, noting that he began riding broncs as a teenager. “I think bronc riding is a little more cowboy. When I was at that age getting into rodeo, that’s all I wanted to do. I got into bronc riding, and it pays a little better than trotting horses around the pasture all day than doing day work on a ranch.”

He began his career in 2016, and in the four years since that beginning, he has learned a great deal about the game. Much of it came this year, thanks to Sundell, but he’s been a bronc riding student for some time. It’s helped, and he’s earned more money each year he’s been in ProRodeo. In fact, he earned nearly $40,000 more this year than last.

“I think the biggest change in my riding this year was just being more consistent,” he said. “Last year I made just as good of bronc rides as I did this year, but they were more frequent this year. Before I’d go on a roll where I’d fall off 10 horses in a row, then I wouldn’t fall off 15 horses.

“I think Wade’s helped in that aspect. He’d get on you a little bit, so it was nice to have someone there that could help. That’s where he could tell you what you did and you fix it on the next one and do your job, winning more money.”

Money is vital in any business, but it’s even bigger in rodeo. Not only does it help cover the expenses that come with traveling tens of thousands of miles a year, but it’s also how championship points are counted. The contestants in each event who finish the year with the most money will be crowned world champions in Las Vegas.

But there’s something about rodeo that is drawn by passion.

“I sure don’t do it for the money; I do it because I love riding broncs,” said Gordon, who credits much of his success to his sponsors, Dakota Rodeo, Woody Creek Ranch and Enerwest Trading Co. “If it didn’t pay anything, I’d still be getting on buckin’ horses.”

At an elite level, though, rodeo can pay well and the NFR is the biggest event in the game with a $10 million purse paying out $26,231 to go-round winners for 10 December nights.

“As of right now, this is my biggest accomplishment,” he said. “Every year I’ve got that goal set where I’m not going to stop until I achieve it. That was my goal this year since I didn’t make it last year. I got to come back and knock two of my goals out this year.

“Now we’ve got a new one going into the finals.  I’d like to win the average, then let the chips fall where they may.”

If that happens, it could be the launching point to a world championship.