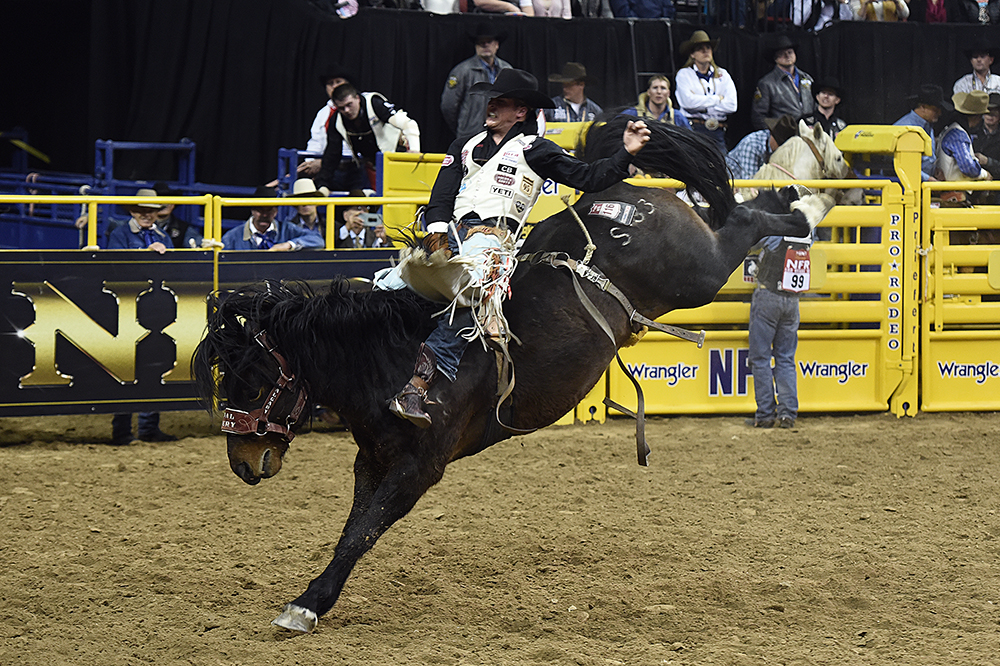 THE WOODLANDS, Texas – From his first National Finals Rodeo qualification in 2014 to his fifth this year, Richmond Champion gets amped up knowing he’s about to compete on the biggest stage of ProRodeo.

“The excitement never goes away; the butterflies never go away,” said Champion, 27, of The Woodlands, Texas, now living in Stevensville, Montana, with his wife, Paige, whom he married this past May. “I have a good idea of what to expect when I’m there. That’s a comforting thing you can use to your advantage.

“It’s a busy week, and you’re giving everything you can to the fans. You have the appearances, your friends and your family there supporting you, then you go and nod your head for the biggest opportunity of the year.”

“It’s a whirlwind, but that’s what we work for,” he said. “I’m proud of the work I’ve put in, and I feel really good about where I’m heading into my fifth NFR. I’ve had good NFRs in the past, and I’ve always left there feeling good about what I’ve done.”

He has a fantastic track record. Last season, he finished the campaign with more than $240,000 in earnings. This year, he finished the regular season with $130,829 and sits fifth in the world standings. Champion recorded 10 outright victories in 2019, six of which were co-sanctioned by the Professional Rodeo Cowboys Association and the Canadian Professional Rodeo Association.

“This was the best winter I’ve ever had,” Champion said of the early season rodeos from January-March. “There were a lot of changes with Houston and The American on board with the PRCA. The race was definitely changed by that, so you wanted to get out of the gates early and get some money won.

“It was good through the spring, and my Canadian season was really good. I hit a little lull after the Fourth of July, battling injuries and battling equipment.”

The fight was on, and he finished the regular season on a high note. More importantly, Champion knew the things he had to prepare for the postseason, which not only included the NFR but also the Canadian Finals Rodeo.

Over those magical 10 December nights in the Nevada desert, he’ll have the opportunity at nearly that much money per night.

“The Canadian finals went good, and I did what I wanted to do there: I got on good horses, and I rode good,” he said. “I went in sitting second in the standings, and I left second. It was a good marker to see what changes I need to make before Vegas.”

“Doing a wedding and a move at the same exact time was a little bit interesting,” said Champion, who credits much of his success to his sponsors, Yeti, Hooey and Nocona. “Everything else seemed like a breeze. It was nice to be able to come home every once in a while this summer.

“Going to Canadian rodeos is much easier. I’m seven hours from Calgary, so I can hit all those spring and summer rodeos and be home by midnight instead of jumping on a plane out of Dallas every weekend. There were big changes this year, but they’re all really good.”

While there have several adjustments, the constant presence in his life is his family. In addition to his wife, he has unwavering support from his mom and dad, Lori and Greg, and his older brother, Doug, whom Champion identifies as the reason he rides bucking horses for a living.

They were there when he was a rookie in 2012 and again in 2014, when he was the first – and still only – $1.1 million earner at The American, a one-day rodeo in Arlington, Texas. They followed him to his victory in Cheyenne, Wyoming, and to his first trip to Vegas for ProRodeo’s championship event.

With Paige by his side, Champion has another set of competitive eyes on the situations that come his way. Paige Champion was raised around rodeo and also is a world-class figure skater who qualified for the 2014 Olympics in pair skating for Canada. That comes in handy, whether she’s with him on the road, visiting with him during his small breaks from the rodeo trail or talking over the phone.

He also has Bennett to bounce ideas off of as they make their way from one rodeo to another. It didn’t hurt that both were newlyweds – Bennett was married in October, and he enters the NFR seventh in the world standings, $20,000 behind his traveling partner.

“You get married, you move and you start figuring out how to balance everything you do with family,” Champion said. “We talk about that a lot. It’s a work in progress. It’s been fun to have the guy you travel with be in a similar position.

“He’s my best friend. I’ve got the sweetest job in the world. I get to hang out with my best friend for four months, compete and ride bucking horses. I wouldn’t want it any other way.”