Spears focused on return to NFR 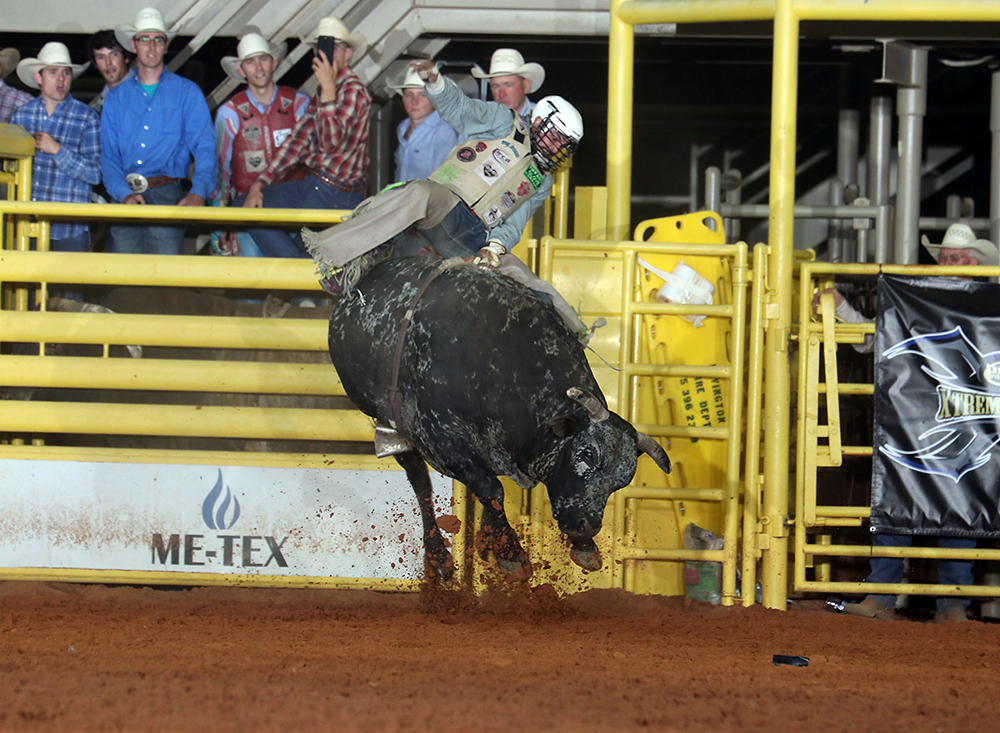 CALDWELL, Idaho – Much has changed in the last year for Jordan Spears, and that’s a good thing.

At the conclusion of the 2018 ProRodeo season, the California-raised bull rider found himself on the outside looking in. He was 18th in the world standings, but the sport’s Super Bowl – the National Finals Rodeo – features only the top 15.

After qualifying for the NFR in 2014, ’16 and ’17, injuries kept him out of the game long enough to keep him away from the biggest event in rodeo. He more than made up for it in 2019, earning $121,548 and finishing the regular season ninth on the money list.

“There aren’t many people that have made it four times, so it’s an accomplishment for me,” said Spears, now living in Caldwell. “It’s a big deal for me. Every year I rodeo, I try to make the finals. It’s where we have the biggest opportunity to make money, and that’s important to me, because eventually I want to give back to the sport and to put on rodeo schools for kids that want to do what I do.

“I rodeo to make the NFR, so I can win as much money as possible and set myself up for the future when I’m done riding bulls. The NFR is where you can make as much money is possible.”

He’s right. Go-round winners will pocket $26,231 each of the 10 nights of the sport’s premier event, set for Dec. 5-14 in Las Vegas. There are thousands of contestants in ProRodeo, and only 120 earn the right to compete in the Nevada desert.

But that’s where the world champions are crowned. In rodeo, dollars equal points, so the contestants with the most money earned in each event will win world titles. It’s the dream of every young cowboy who has slept through the night with visions of the yellow bucking chutes and gold buckles.

“I’m approaching the NFR a little differently than I have in the past,” said Spears, who grew up in Redding, California, and attended Mesalands Community College in Tucumcari, New Mexico, and Feather River College in Quincy, California, on rodeo scholarships. “I’m eating differently, and I’m working out a lot more.

“I’ve had some success at the NFR in the past but not where I’m capable of. I’m a veteran, so now I’m more focused on being prepared and being in the best tip-top shape.”

The rodeo season is a difficult grind. In addition to strapping himself to 1,800-pound bulls, he also travels tens of thousands of miles a year in order to make a living in the sport he loves. That means there are plenty of all-night drives on the schedule just getting from one rodeo to another.

There are restless nights and sore bodies, and injuries are bound to happen in this rough-and-tumble sport that involves man vs. bovine. Still, Spears craves those moments, and they’re important; they are the direct path to the NFR.

“Missing the finals last year left a bad taste in my mouth knowing I came that close,” he said. “I worked all year and just missed it, and that was because of a little bit of bad luck. I got hurt and had to sit out in a time of year when I was usually winning.

“It just pushed me to work harder and put more effort out. It’s an eye-opener to know you’ve got to be dedicated to put everything into it to make the NFR. It showed me things I need to work on and change to make the NFR again.”

A key part to his campaign came in the way of 10 event titles, including the Xtreme Bulls Tour Finale in Ellensburg, Washington; the San Angelo (Texas) Livestock Show and Rodeo; and the Rancho Mission Viejo Rodeo in San Juan Capistrano, California. Still, for the bull rider who spent so much time in California, he has a specific victory that stands out.

“I’d say Clovis (California in April) was probably my biggest win,” said Spears, who credits his sponsors – CINCH, Cody’s Cowboy Hats, Sexy Extracts and the Mirage – for helping him get up and down the rodeo trail. “Both that one and the Xtreme Bulls Finale were game-changers, but in Clovis, I rode a bull that I’d had good luck on before and had some history with.

“But to ride him on one of his best trips ever and to win that rodeo at that time of year, it was a good time to get hot at a lot of those big rodeos close to home with a lot of family and friends there. It drives you and gets you excited for the summer run, and you’re more confident and ready to hit the road.”

His confidence showed with the amount of money he earned through the regular season, and he has a chance to earn even more over those 10 December nights. The fact that he has earned more than $120,000 and still sits ninth in the standings is saying something, but there’s more: A year ago, the top 10 cowboys all earned more than $100,000; this year, the top 16 bull riders earned at least $105,000.

“It’s crazy how fast it’s growing,” said Spears, who earned more money so far this season than he did in all of 2014, his first year in Vegas. “As a bull rider, you’re not necessarily looking at the money; the reason you ride bulls is because you have a passion for it. The fact that it’s growing more each year is exciting.

“It makes me appreciate the rodeo committees, the sponsors and everybody that’s put into the sport to make it grow, how much more comfortable you can live riding bulls and doing it for a career. It makes me very thankful that it’s growing while I’m still part of it.”

He is just in his sixth year of professional rodeo, but Spears has been around the game all his life. His father, Randy, was an all-around cowboy – roping, riding and steer wrestling through his career.

“It inspires me to know my dad was so competitive that it makes me want to be just as good or better than in competing in multiple events,” he said, noting that he’d like to battle for all-around titles as well. “His hard work in guiding me and coaching me makes me want to do good and make him proud.

“I saw my dad compete when I was younger, but being raised around rodeo is the reason I have a passion for it. Being in the Western lifestyle, I was never forced to rodeo, but I just started doing it and fell in love with it, so I have the passion, drive and talent to do it.”

He’s the middle child of five kids in his family, which includes two older sisters, a younger sister and a younger half-brother. It was a common upbringing, getting picked on a bit by his older siblings and working and playing outside most days. Life in rural America wasn’t about video games and social media.

“Growing up on a farm definitely makes you into a different breed as a person with the responsibilities you have,” Spears said. “It’s not all about you, and you have to take care of yourself in a certain way. It definitely gave me a mental toughness. You have to work at stuff, because nothing was ever handed to you. I’m glad I had that when I was growing up.”

That work ethic has shaped him into the cowboy he is today, and he has an opportunity to share it before a national television audience and about 17,000 fans a night that pack into the Thomas & Mack Center in Las Vegas. After missing that atmosphere last December, he’s excited to be part of that ambience in 2019.

“It gives you perspective,” he said. “In 2015 when I had to have shoulder surgery and had to take the whole year off, it definitely made me look at rodeo and bull riding differently. When you can’t do something you have a passion for, it lights a different type of fire in you.”