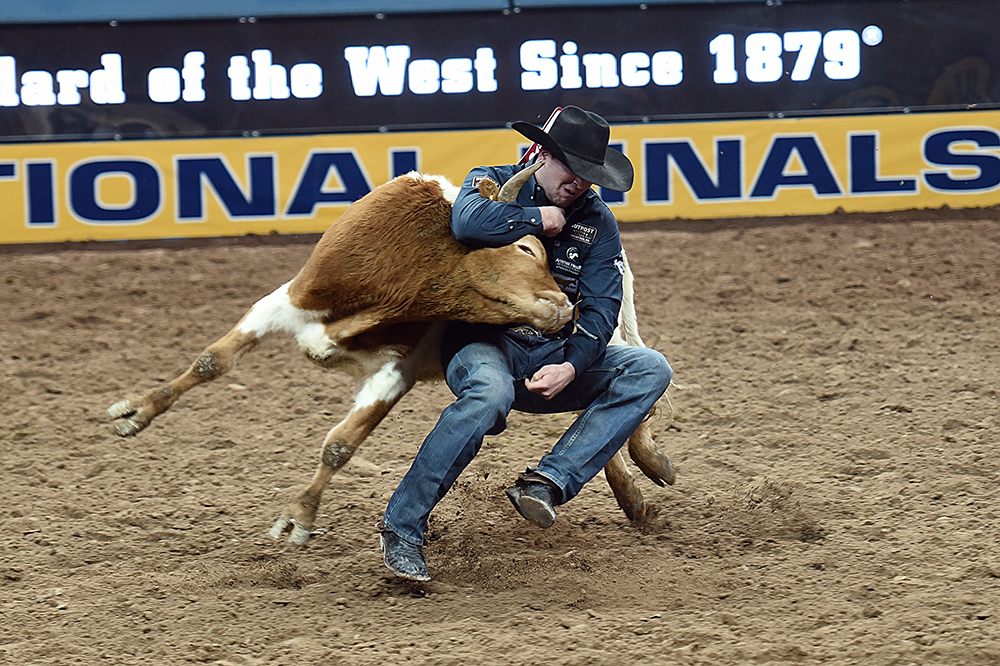 RAMONA, Kan. – Tanner Brunner isn’t ready to move to Canada, but he had some serious success north of the border.

That money counted for both the Canadian and world standings, and they were a big reason why he will compete for the second time at the National Finals Rodeo, the sport’s grand finale set for Dec. 5-14 in Las Vegas. He also made a late-season push in September to secure his spot as the No. 15 bulldogger in the game, less than $1,700 ahead of the 16th cowboy.

“It’s always a sigh of relief when you finish inside the top 15 and make it to the NFR,” said Brunner, who was raised in a rodeo family that all attended Kansas State University and competed on the rodeo team in Manhattan, Kansas. “It’s not only a sigh of relief that you made it, but you also have a little time off and be off for an extended period of time for the first time in four months.”

His big push came in early July, when he won two Alberta rodeo in Medicine Hat and Ponoka, and pocketed $17,139 between them. He utilized the bulk of his July earnings to also qualify for the Canadian Finals Rodeo, where he added $15,795 by placing in three rounds and finishing third in the average. He finished sixth in the Canadian standings.

“Making the Canadian Finals definitely wasn’t on my list of goals at the beginning of the year,” said Brunner, who credits a great deal of his success to his family and sponsors, Coats Saddlery, Cow Camp Ranch, SportZone, MJE Livestock Equipment, KSU Rodeo Club, Animal Health International and the Outpost Western Store. “After Ponoka, I had a good shot at making the finals.

“I was pretty fortunate to go up there and get on horses up there, having some guys helping me out to try to get my rodeo count in. I think I did alright at the CFR. It’s a long six days, a lot like the NFR. I was happy to come away with some money and try to build on that.”

Now, his goal is to stay sharp though the remaining practices he has before he nods his head at the biggest rodeo of the year. The NFR offers a $10 million purse, with go-round winners earning $26,231 each night.

“Every little bit of experience helps you when you get to the finals,” he said. “At the CFR, I got to be on the same horse with the same hazer and haze horse that I’ll be on for the NFR. Being on those horses in that setup, it is almost as close as you can replicate the NFR, especially getting a little bit of pressure put on you and getting some runs in competition.”

The horses are owned by Sean Mulligan, a four-time NFR qualifier from Coleman, Oklahoma, who has served many times as hazer in Sin City. It’s his duty to haze the steer into position to give the bulldogger his best chance to make a good run. He also happens to own Miss Kitty, which Brunner will ride, and Shooter, the haze horse.

“Those horses really fit my style,” Brunner said. “When you’re bulldogging, you’ve got to think less and react more. They make it pretty easy.

“About every year, Sean’s out there hazing for someone. There’s a lot of trust with Sean. I feel 110 percent comfortable with him on the other side, what’s underneath me and what’s underneath him. I think we’ll have one of the best teams there.”

Just two weeks before Mulligan and Brunner were in Red Deer, Alberta, for the CFR, they were in Duncan, Oklahoma, competing at the RAM Prairie Circuit Finals Rodeo. Brunner won the opening round, then finished in a tie for second in the next. He finished the rodeo with a three-run cumulative time of 13.0 seconds to win the average championship.

“Winning the average at our circuit finals has been a big goal of mine for quite a few years, and to finally accomplish it feels really good,” Brunner said. “Our circuit is one of the toughest ones year in and year out as far as competition; a lot of guys that make the circuit finals every year have been to the NFR.”

He earned his first qualification last year and placed in the third go-round. He would have liked to have performed better, especially with so much money available, but that can be the rollercoaster that is ProRodeo’s grand championship. There are 17,000 people a night inside the Thomas & Mack Center, and the pressure to perform well inside that building is intense.

Part of that was being away from home. He spent just 12 hours in Ramona from June to September. It was difficult, because family has always been important. But this is a business, and the biggest part of his business is chasing the big bucks in Las Vegas each December.

“You always wish you were home more, especially now that I’m getting older and wanting to contribute a little more to the family operation,” Brunner said. “They’re pretty understanding of me. I’ve got a great family that keeps everything going. In five or 10 years when I’m done rodeoing, I’ll be there to help out a little bit more.

“When you’ve worked so hard to get to the top, you don’t want to quit.”

He finished the regular season with $74,950 and trails the world standings leader, Ty Erickson, by $71,000. If everything goes right, Brunner can make up that ground in three nights in the Nevada desert.

“There are guys that get hot at the NFR and can come from way back to make a run at the No. 1 spot,” he said. “I’m hoping I’ll be one of those guys.”

Thanks Ted. Nice job, as always. A fine family that stays around the top in all they do. Being K-Staters never hurts either.