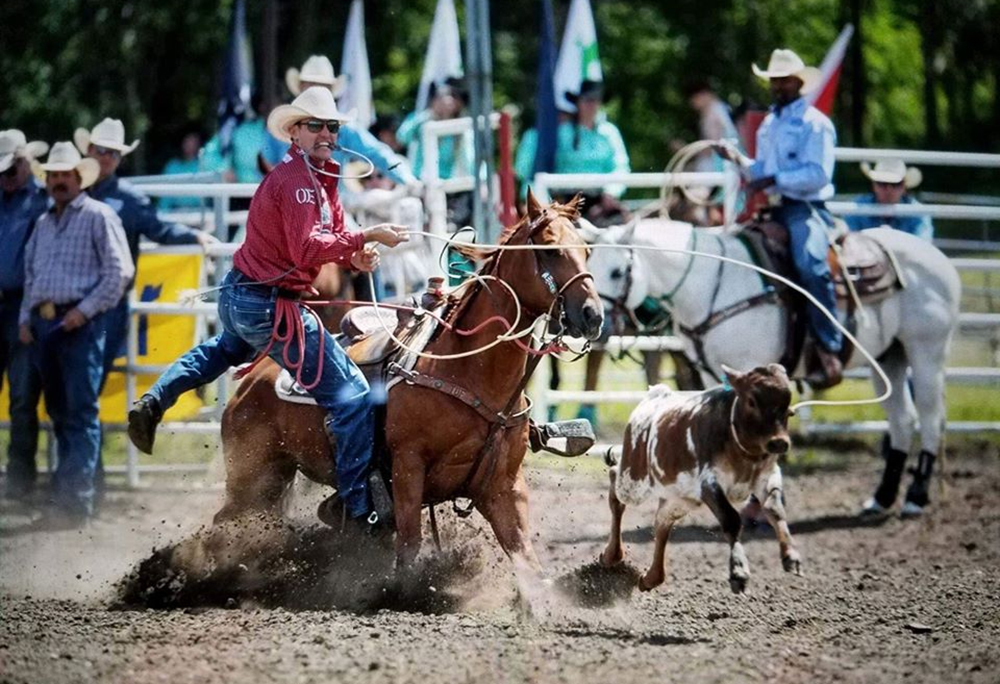 DECATUR, Texas – Most champion racehorses have a great pedigree, with outstanding bloodlines coming from both sire and dam.

The same is true for four-time world champion Tuf Cooper, whose father, Roy, is best known as the “Super Looper,” a ProRodeo Hall of Fame cowboy with eight gold buckles. On his mother’s side, Cooper’s grandfather, Clifton Smith, was a three-time National Finals Rodeo qualifier, while his uncle, Stran Smith, is a 10-time NFR qualifier and the 2008 world champion tie-down roper.

“But I love this job, and I’m so fortunate to have this job. My goal is to do this as long as I can. I told my dad that I wanted to qualify for the NFR when I’m 50. That’s going to be taking care of good horses and taking care of my body.”

He’s doing a pretty good job so far. He has qualified for the NFR 11 times and this year sits fourth in the tie-down roping world standings with $105,592. He moved to third in the all-around standings with $159,756, about $23,000 behind the leader, roughstock cowboy Stetson Wright.

He won two go-rounds and placed in two others at the Clem McSpadden National Finals Steer Roping in late November, and the nearly $23,000 he pocketed in Mulvane, Kansas, moved him up one spot in the all-around world standings.

“Anybody can be a champion, but to live a lifestyle that I want to live as a champion is the same thing that being a cowboy means to me,” said Cooper, who credits his success to his family and close friends as well as his sponsors, Rock & Roll Denim, Panhandle, Platinum Performance, Bloomer Trailers, American Hat Co., Tate Branch Auto Group, MGM Grand and OE Outlaw Equine.

“A champion is a good loving, hard-working, respectable man that cares about others, cares about animals and cares about the country that we live in.”

That definition fits him to a tee and has since he was a little boy growing up in north Texas. He has three older siblings, all of whom have qualified for the NFR – barrel racer Shada and tie-down ropers Clint and Clif. His favorite childhood memory centers around roping.

“My childhood was in the dirt,” he said. “That’s where I wanted to be. That’s where we were all the time.”

He still toils in the dirt and does so at rodeo arenas all across the country. He owns three tie-down roping world championships (2011-12 and ’14) and the 2017 all-around gold buckle. He earned the latter after adding steer roping to his repertoire and has qualified for the NFSR each of the past three seasons.

“My team roping wasn’t going so well,” he said with a laugh, “and I wanted to win the all-around.”

He stands a good chance, but it’ll come down to who does the best in Sin City from Dec. 5-14. While he has always loved being a cowboy and all that it stands for, Cooper has gained a better perspective about what he does and how he does it. Life on the rodeo trail isn’t easy, with all-night drives and traveling tens of thousands of miles to compete for a living. There are no guarantees in this sport – the only way to make money is to beat most of the contestants in the field.

“In 2016 when we didn’t ProRodeo, I learned so much about myself, my industry and my job,” said Cooper, who married his wife, Tiffany, on New Year’s Eve last December. “I learned how much I actually love what I get to do. Since I was 13, roping has been a job for me.

“I realize how fortunate I was to get to wake up and be a cowboy. It’s the coolest thing in the world. I never really understood, because I had been treating it like it was a job. I found out how fortunate I am to put on my American Hat cowboy hat and do what I do. Once I learned to love the process, there’s no way to beat that. Every part of the day is my favorite part of the day.”

He lives every day with Tiffany, whom he’s been with for several years. They are more than a married couple; they are a team. She travels the country with him, driving and doing so many other things necessary for the team to win.

“It’s so cool to be with her,” he said. “I love being married. She does everything for me but nod my head.”

While the all-around title in ProRodeo is the most coveted – “It’s the most prestigious title in the game,” he said. “I love it, and that title is so cool.” – he knows the road to a second goes through Las Vegas and what he does in tie-down roping there. It’s been five years since he last won a tie-down roping gold buckle, and he would love to keep adding to his collection.

“All roads lead back to impatience on my part,” Cooper said. “Knowing I could do it and wanting it so bad, I was impatient with the process instead of trusting my style and my ability.

“There’s so much money in Vegas that season leads don’t matter. You’ve got to make 10 good runs. As long as you qualify. Tyson (Durfey) won the world coming from 14th a few years ago. You’ve got to do well in Vegas, focus on 10 runs and 10 calves.”

That’s easier said than done. The Thomas & Mack Center can be the toughest place to play the game. There’s a $10 million purse, and go-round winners will earn $26,231 each night. That adds a ton of pressure.

But he’s been through that before. He was raised by it. He was named after his father’s father, Tuffy Cooper, who lived in the hardscrabble terrain of southeastern New Mexico most of his life, knew tie-down roping and shared his love for it with many others.

“It’s cool to carry on his name with my life,” Tuf Cooper said. “He taught my dad to rope. He was a very smart man, especially roping. I always said my dad taught me how to win, but over the phone, my grandpa would tell me tings to improve my roping.

“My mom’s dad was a great calf roper, an NFR calf roper, but he is an amazing man, the kind of man we all want to be. This is who God created me to be.”