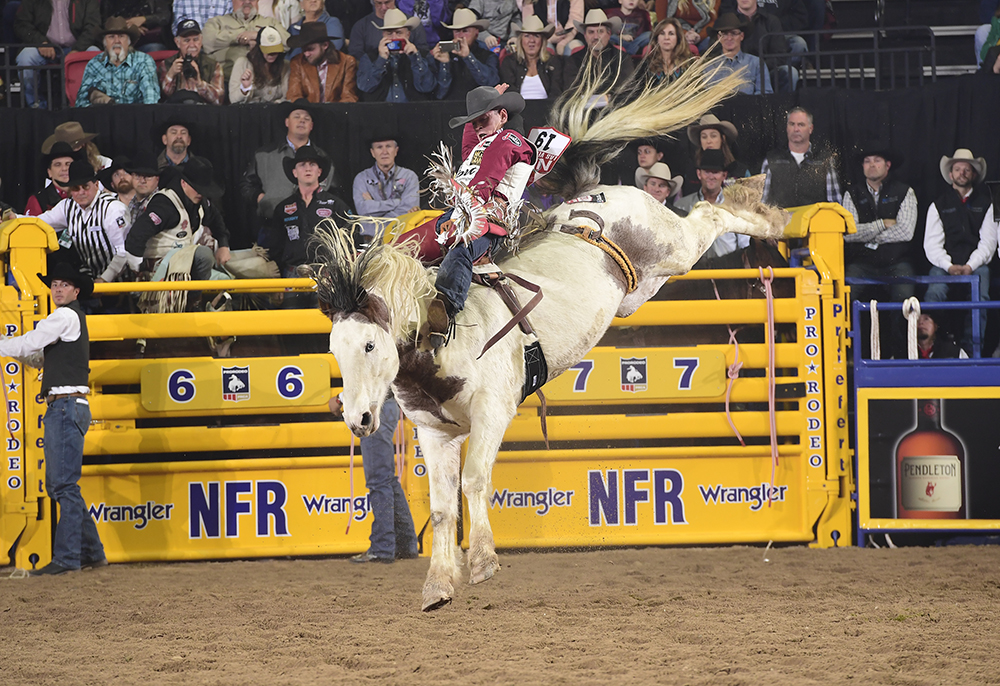 LAS VEGAS – On opening night of the 2019 National Finals Rodeo, Tim O’Connell scored 88 points on Powder River Rodeo’s Two Buck Chuck and was just a point off the first-round record.

It was a tremendous way to start his sixth NFR, however, there were four guys who had better scores, three of whom beat the previous mark of 89 points with rides in the 90s.

“I don’t now if in the history of this event that three guys have showed three 90s in the first round, and that’s just our hopper pen,” he said, explaining that the opening round is supposed to be the most fun horses they can get on over the 10 nights of ProRodeo’s championship event. “These were just supposed to be the nice ones.

“We are here, and we are here to play. We mean business. You are going to see a dog fight all the way to Round 10.”

But the name of the game is to win as much money as possible, and that’s to have a better score than most everyone else in the field.

“I caught fifth tonight, but I still have nine more rounds to pluck away at these guys,” said O’Connell, who added $6,769 Thursday and pushed his season earnings to $129,938. “It’s so important to catch checks each night. It’s so important to stay solid in the average. The guy that wins the average here is probably going to be the guy that wins the world.

“I’m solid; I’m excited. This could have been taken away from me so fast. I’ve enjoyed every moment of it so far. There are some little things to work on to make sure I’m ready for (Friday) night.”

He understands the importance of winning the average by having the best cumulative score of the 10 December nights of the NFR. In his three world titles, he won the first two average championships outright, then spit the average a year ago with Steven Dent.

Still, he trails the leader, Clayton Biglow, by nearly $83,000. That means the Californian is in the driver’s seat, but that doesn’t mean his path can’t be detoured. O’Connell has faced his own road bumps along the way this season. He suffered a severely damaged shoulder after his final-round ride last December and sat out of action until late June. Then, he pushed the gas pedal down and earned more than $100,000 in the final three and a half months of the season to advance to the NFR.

“I’m not being hunted (like the last three years); I’m the hunter,” said O’Connell, 28, of Zwingle, Iowa, now living in Marshall, Missouri, with his wife, Sami, and their son, Hazen. “There’s a little pressure off me, but I do believe everyone needs to look over their shoulders, because I do plan on coming here and taking care of business.”