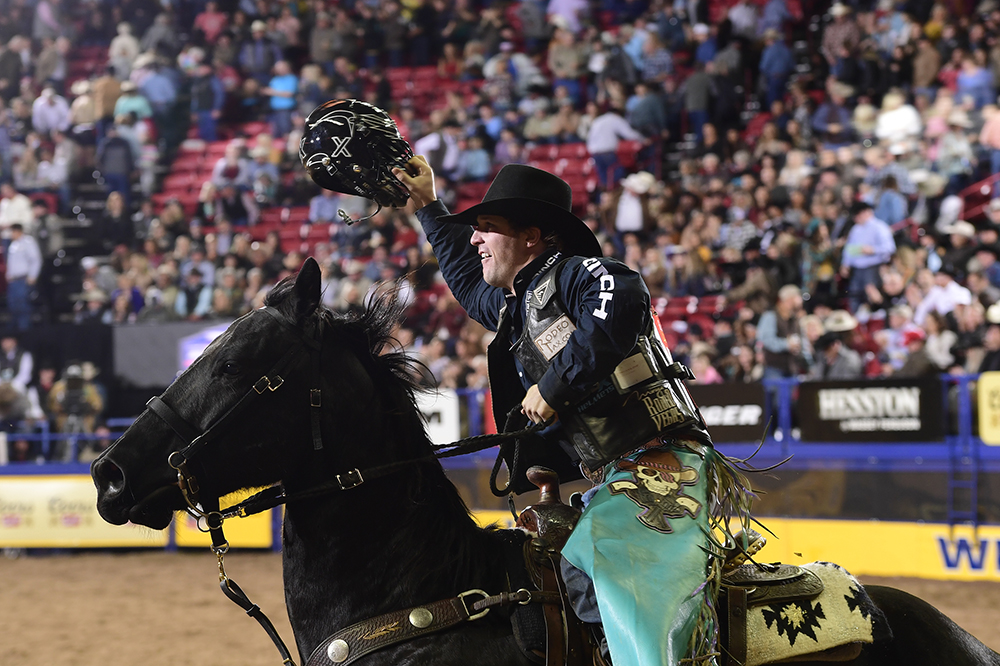 LAS VEGAS – Garrett Smith had just ridden one of the rankest bulls in ProRodeo for 91.5 points on Friday night to win the second round of the National Finals Rodeo.

It was a thrilling ride, but he was most fascinated by what happened directly afterward.

“I don’t remember my get off, but I didn’t land on my head, so that’s pretty impressive,” said Smith, who shared a wry smile that was both descriptively funny and truthful at the same time. “That’s two nights in a row.”

He was one of just three of the 15 bull riders to cover their bulls for the qualifying eight seconds, and each earned a bit of a bonus. Each round pays out $84,615, and the remaining three spots ($22,000) were split among the three who placed, with each earning $7,333 in addition to their original earnings. For Smith, he pocketed $33,564.

The bulls held the advantage from the beginning. As the eighth cowboy to go, Smith was the first to make a qualified ride, matching every move Pete Carr Pro Rodeo’s Black Gold threw at him. He was joined in the winner’s circle by five-time world champion Sage Kimzey and Boudreaux Campbell.

Through two nights in Las Vegas, Smith has earned $47,795 and has pushed his season earnings to $171,769. He has moved from seventh to fourth in the world standings.

“I’ll take that,” he said. “It is better than sitting at home like last year.”

Injuries kept the Idaho cowboy from advancing to the NFR a year ago – he finished 23rd in the 2018 standings. He’s already making a statement in his return to ProRodeo’s grand championship. He didn’t know much about Black Gold, but he made it work to his advantage.

“I knew he (spun) right,” Smith said. “All they told me was he was a handful. It was either going to work, or it was going to be good-watching. To be (91.5) in another rodeo is great, but to do it in front of all these people for this much money is incredible.

“Riding him was like letting a balloon loose. It was going by really fast, and at one point, I closed my eyes, and it worked out.”

A key, he has said, is to feel good while competing at this year’s NFR. Injuries have hampered him in his early rodeo career, but he finally himself completely healthy toward the end of the 2019 regular season.

“I feel awesome,” he said. “My knees aren’t even sore, so that’s impressive.”

He’s also taking a different approach to his mental game, which is a big part of finding success in this sport.

“Having that really takes everything off bull riding, so when you go back, you go back fresh.”

Bull riding is mostly a reactionary sport, so letting his mind get out of the way of his athleticism is key. It’s led to success early in this year’s championship, and he hopes it will keep rolling through the final eight nights in Sin City.

“I only got on one bull before getting here,” said Smith, now competing at the NFR for the third time in four years. “That worked out pretty good. I’m really good at not thinking.”