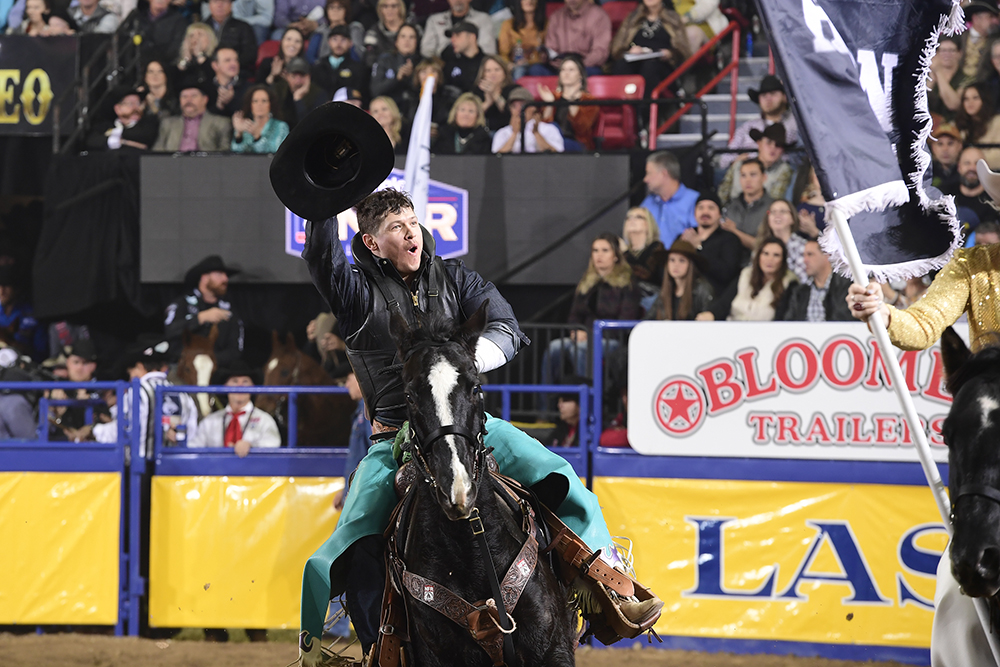 LAS VEGAS – No matter how much he wanted to portray the part of Elsa in “Frozen,” Tanner Aus just couldn’t let it go.

On Thursday’s opening night of the National Finals Rodeo, Aus was saddled with a no-score and took himself out of the chance to win some money in the average, a large-paying bonus given to the top eight cowboys in the 10-ride cumulative score. It was also a missed opportunity on the final 10 nights of the 2019 ProRodeo season.

“I probably quit thinking about it (Saturday).”

That’s because Aus rode one of the nastiest bucking horses in the business – Frontier Rodeo’s Full Baggage – for 90 points to win Saturday’s third go-round, earning $26,231. It was his first paycheck of this year’s championship.

“This is the best place in the world,” he said. “You can’t hang your head about a zero; you just can’t do it. There are hundreds of guys that would like to be in my position. You just forget about it.”

“It has been incredible,” he said. “I feel the competition and the horses we picked to come here is making it crazy. We joke in the locker room, but if it’s going to be this tough, what are we going to do. We are seriously going to have to step up our game again. Everybody showed up here prepared, even the guys that are here for their first trip.

“Everyone is in shape; everyone is feeling mean. It’s really great to be part of it.”

“When I saw that I got Full Baggage, I was very excited,” Aus said. “I had been on that horse one other time, and I was 90 in Corpus Christi (Texas) this spring, so I had that in my head. I was really thankful for the way it turned out. It was just a fight. We had our (Eliminator) pen out tonight, so every ride that was eight seconds long was a fight. I’m happy that it went well.

“He’s very consistent, and they buck him out of the front chute with a left-hand delivery, so he angles across there. He was everything you want; he is strong and a lot of time really gets in the air.”

As with all the horses in the “Eliminator Pen,” he was definitely a handful. Horses that buck in the third and eighth rounds are considered the toughest-to-ride in the world, and they proved it again Saturday.

“There were horses in that pen tonight that strike fear into the hearts of men,” Aus said. “This was a real E pen. To have one that I’ve been on before was a leg up in confidence.”