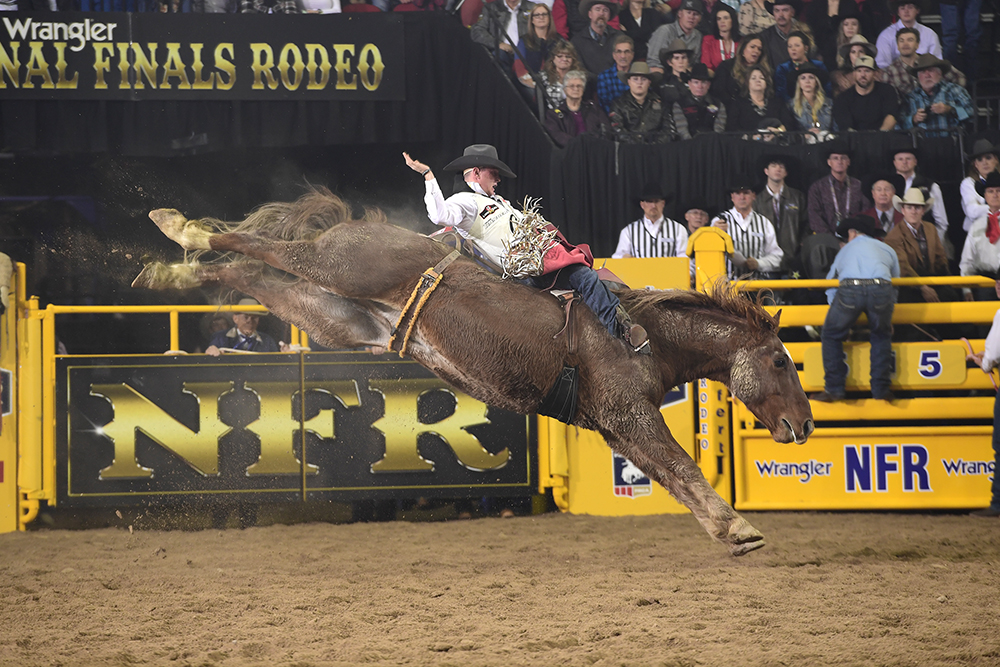 “It’s nice to get through the first “E pen” healthy and unscathed,” O’Connell said, referring to the “Eliminator Pen” of horses, known for being the most difficult-to-ride at the NFR. “But I’m looking to get in that top five. There have been five guys in front of me, and come (next) Saturday night, I don’t want one guy in front of me.”

The relief is gone, and the focused has returned. After missing most of the 2019 regular season because of an injury, he entered the NFR sixth in the world standings. On Saturday night, he rode Powder River Rodeo’s Black Leg for 87 points to finish fourth in the third round, worth $11,000.

“I had a great horse in a pen of hard horses,” said O’Connell of Zwingle, Iowa, now living in Marshall, Missouri, with his wife, Sami, and their son, Hazen. “I feel like I had a strong start and that I was very patient waiting for her to break, not trying to do too much. There was an 89 posted before me; normally when that happens, I start thinking about going after the round win, but I knew what that horse could probably do under me.

“She doesn’t really have a set pattern, but I knew she was going to go left. She can make a really tight circle, so I stayed patient until she broke and made a smart ride. I didn’t do anything that was going to put me in jeopardy.”

“Right now, I’m happy with how things are going. I feel great; I feel aggressive. Out of the six times I’ve been here, I don’t have any pressure on me this year. I feel confident. I feel deadly on everything under me.”

That confidence shows in glowing ways. He has his equipment dialed in, as is his body, which can take a beating on the backs of the best bucking animals in the world. His pre-NFR workout regimen has him conditioned well to handle the stresses of Las Vegas in December.

“I’m enjoying this time out here with my wife, my family and my little boy,” O’Connell said. “I’m excited. I really think this is the best start to my Wrangler NFR career.”