Home - Uncategorized - Struxness consistent in Round 3 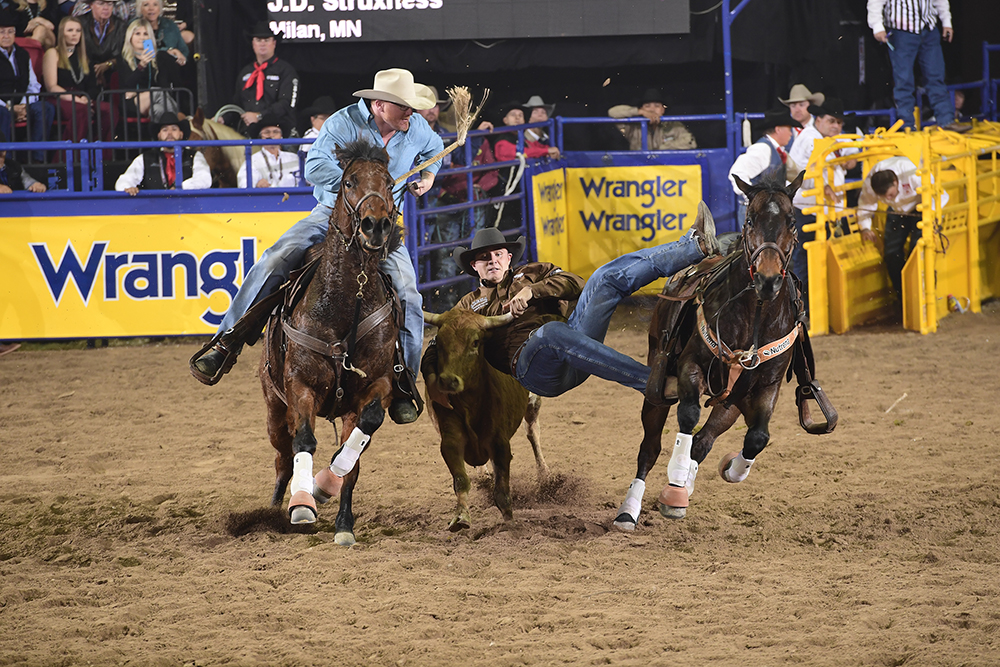 LAS VEGAS – J.D. Struxness is one of the hottest steer wrestlers early at the National Finals Rodeo.

Struxness – a three-time NFR qualifier from Milan, Minnesota, now living in Alva, Oklahoma – placed for the third time in three go-rounds in Las Vegas, stopping the clock in 4.3 seconds Saturday to finish in a three-way tie for fourth place in the third go-round of ProRodeo’s grand finale.

This marks the Minnesota cowboy’s third qualification to the NFR in four years, and he’s been quite successful in the Nevada desert. In 2016, he won at least a share of four rounds and placed in two others, pocketing nearly $130,000 over 10 days. A year later, he earned almost $110,000 at the NFR.

Last year, he missed competing for the world championship, finishing the regular season 27th in the standings. That provided him with solid motivation as he pushed his way into the top five with seven nights remaining on the 2019 campaign.

The key to his success this week has been consistency, which also is what catapulted him to the intercollegiate national title while competing at Northwestern Oklahoma State University. He was solid through all four runs at the College National Finals Rodeo that year, and he has proven that to be a valuable tool in Las Vegas.

With his former rodeo coach and current traveling partner Stockton Graves serving as his hazer, Struxness has made runs in the same area of the Thomas & Mack Center arena each of the opening three rounds. Graves, a seven-time NFR qualifier, took over the Northwestern program right before competing in Las Vegas for the last time in 2011.

Struxness is actually one of two former Northwestern bulldoggers competing at this year’s championship – he is joined by Kyle Irwin of Robertsdale, Alabama. Both serve as proof of the talent that comes out of Alva, a community of 5,100 people; Northwestern has been dubbed the Bulldogging Capital of College Rodeo.

Now Struxness would like to add a Montana Silversmiths gold buckle to his resume, but he knows the key will be to remain consistent through the final seven nights of ProRodeo’s premier event.