Breuer steps up big in Round 4

Home - Uncategorized - Breuer steps up big in Round 4 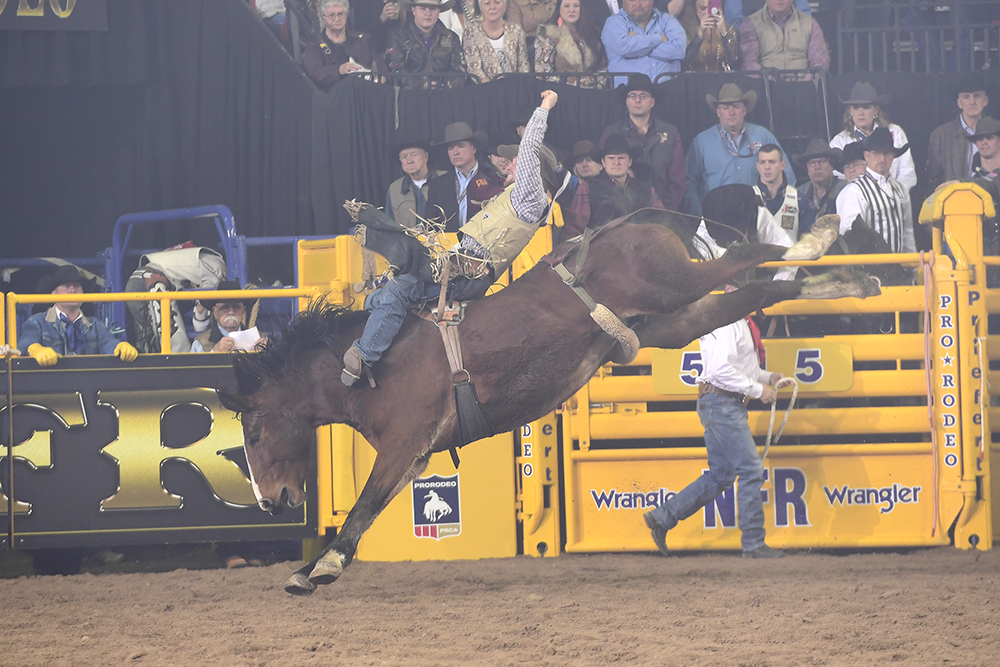 LAS VEGAS – When things don’t go a competitor’s way, that person could either pout, blame others or move forward in a positive way.

Ty Breuer is no prima donna. When he suffered a no-time in Round 3, he realized the missed opportunity, then he made up for it in Sunday’s fourth go-round of the National Finals Rodeo. He rode Sozo of Sankey Pro Rodeo & Phenom Genetics for 87 points to finish in a tie for third place on the night.

“I had that horse at my hometown rodeo a few years ago and ended up winning my on him,” said Breuer of Mandan, North Dakota. “That is a really good horse, and I had seen him all summer. At every Sankey rodeo, they win on that horse. He’s really nice and rider-friendly.”

Every horse in Sunday’s pen was rider-friendly, unlike Saturday night’s grouping of buckers. Breuer’s zero came in the “Eliminator Pen,” a prized list of the hardest-to-ride horses in the game. His draw, Northcott Macza’s Spilled Perfume, is every bit of that.

“My wrist got it pretty good (Saturday) night,” he said. “I talked to some of the guys in the locker room about that horse before I got on her, but no one said anything about what she was like. When I got back to the locker room after that round, they said, ‘Oh, good job; you made the pickup man on her. We’ve never even rode her.’ ”

Breuer’s problem came at the start when he failed to secure his mark-out: firmly having the boots over the horse’s shoulders when it lands on its front hooves. That helps give the horse an advantage, but it also sets up the ride. Failure to do so results in a no-score.

“That’s the way it goes sometimes,” he said. “You’ve just got to keep riding and forget about that one.”

“Just being in that locker room and everything else that goes with that is great,” Breuer said. “The first guy out tonight was 88 points. It’s just crazy. The top 15 are all that good. That makes it fun.”