Larsen scores big to win Round 4 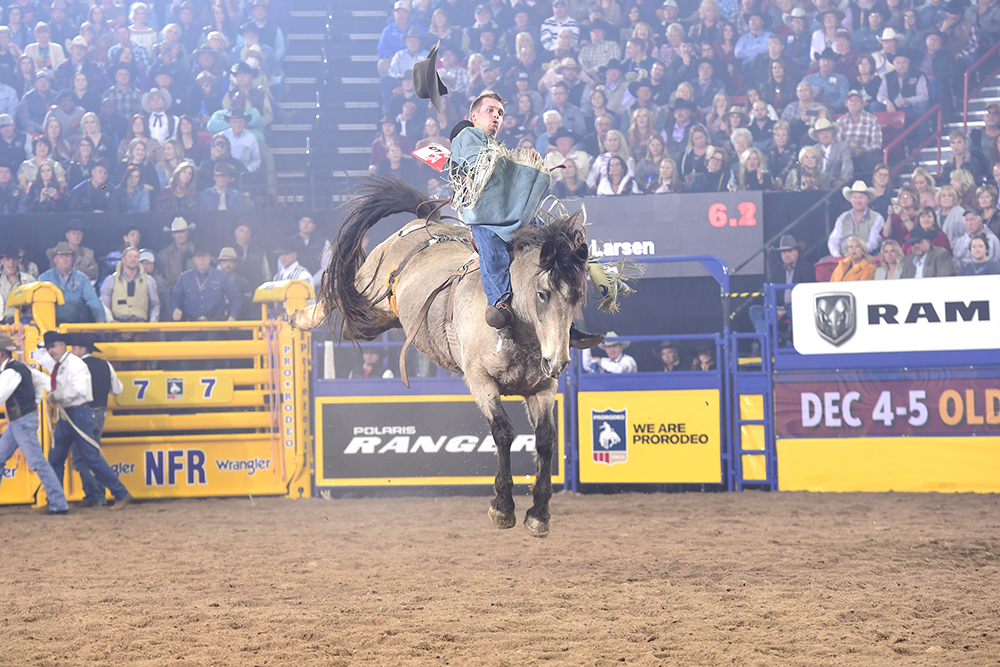 LAS VEGAS – Frontier Rodeo has been known to have many of the best horses in the world of ProRodeo, so Orin Larsen knew he had something special even before he got on Night Fist for the fourth round of the National Finals Rodeo.

“When you have a Frontier horse, you have to take advantage of it,” said Larsen, who rode Night Fist for 90 points to win Sunday night, collecting $26,231. “That horse felt awesome. I was pretty happy to have her.

What’s cooler is that the $38,346 he’s earned so far at this year’s NFR has pushed him up a spot to second in the world standings. He now trails the leader, Clayton Biglow, by $7,663. He is easily in the hunt for a world championship with six nights remaining in the 2019 ProRodeo season.

That’s even after having low scores the previous two nights. Larsen was 76.5 points Friday and 75 points Saturday, so he wanted a bit of a Redemption Sunday.

“It’s almost a redo. You screw up the last two, and now it’s time to figure something out. That was a great pen of horses, and I was pretty excited to have the one I did.”

“We’ve got a salty group of guys and a salty group of horses here,” he said. “It’s pretty amazing. If you can get that many 90s by the fourth round, you know the caliber is just getting better and better. I am extremely fortunate to be in that same locker room with them.

“I’m just plum tickled to be here. I’m excited for these next few rounds.”

Look for scores like that to continue, especially in Monday’s fifth round, which will feature the most electric animals in the sport in what the cowboys call the “TV Pen.” A year ago, Biglow won the fifth round with an arena-record 93-point ride.

“It will probably take 88 or 89 points just to place,” Larsen said. “I wouldn’t be surprised that you might see four or five in the 90s.”

The way things have gone so far, it’s almost likely.