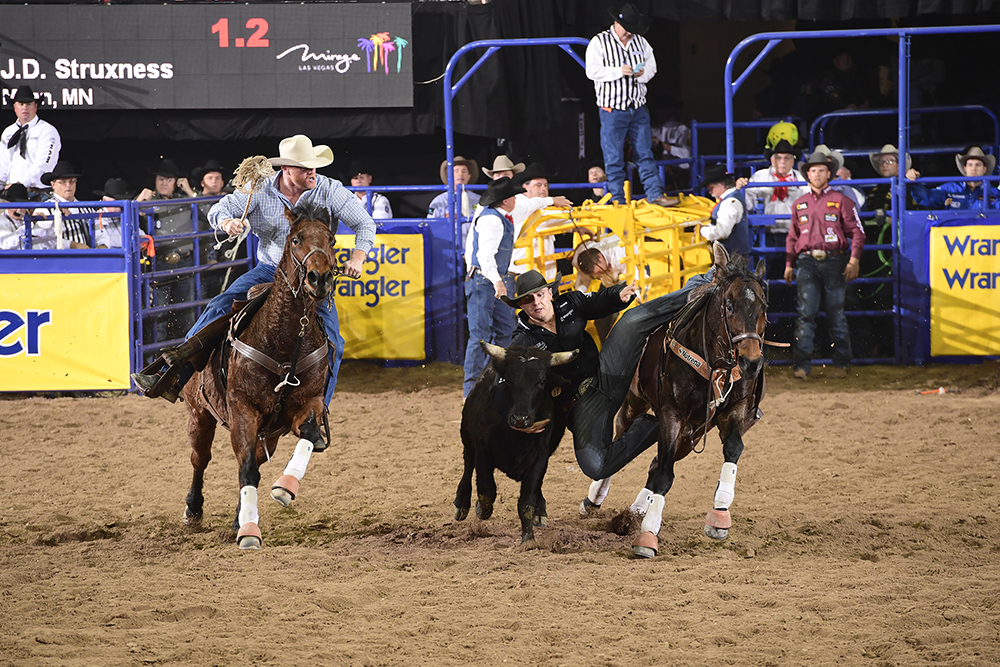 He’s doing quite well at the Thomas & Mack Center, home of the National Finals Rodeo since 1985 – nine years before he was even born. On Sunday night, he placed for the fourth time in as many nights and has pocketed $62,321 in Las Vegas.

It gets better, though: He still has six more nights to cash in.

“That is a good thing to do out here,” said Struxness if Milan, Minnesota, now living in Alva, Oklahoma. “Anytime you can place in a round, it’s good. Hopefully we can keep chipping away at it.”

On Sunday night, he wrestled his steer to the ground in 3.9 seconds to finish fourth in the round, collecting $11,000. It all adds up.

“My first year, we stubbed our toe a couple of times,” he said. “This year, we are just staying share and staying on top of things. We have to be aggressive, but we probably aren’t cutting loose as much as we did that year. Being able to place in four rounds in a row, that’s a good momentum-starter.”

Momentum has been his way. He’s the No. 1 man in the average, having knocked down four steers in a cumulative time of 16.3 seconds. He is four-tenths of a second ahead of the No. 2 man in the aggregate race, two-time and defending world champion Tyler Waguespack.

“Horsepower definitely helps,” Struxness said. “This year, I’m riding Stockton Graves’ good horse, Freeway. Stockton’s on the hazing side and has Kody Woodward’s horse, Roany. Having those two out here and having Stockton hazing, there I a lot of confidence going in there every night.

“Knowing that we are going to get a good start and catch up on everything really helps. All I’ve got to do is do my job when my feet hit the ground.”

He became a dad for the first time just before the NFR, and he/ said spending time with his daughter, Everlee, has been a blessing. It’s been his retreat from the stresses of making runs for the biggest money in the game every night while he’s in the Nevada desert.

“With my new baby girl this year, it has been one for me to go back to the room and love on her,” he said. “That has been good for me, and we just look forward to the next night every night.

“I think my biggest support is my family. They are here and have been helping me with my daughter and everything. They have been a huge support so we stay rested up and fresh, and there’s nothing to worry about.”

It’s also a business trip, and his business is bulldogging to the best of his ability every night.

“I think the big thing that helps is years of running steers in this building,” Struxness said. “The first year, I got excited, tried to catch up fast, and I made mistakes. This year I’m just trying to have a start every time and make the best run on the ground and steer you have.

“Hopefully it will put you in the money. If not, hopefully you make a solid run that is going to keep you in the average at the end.”