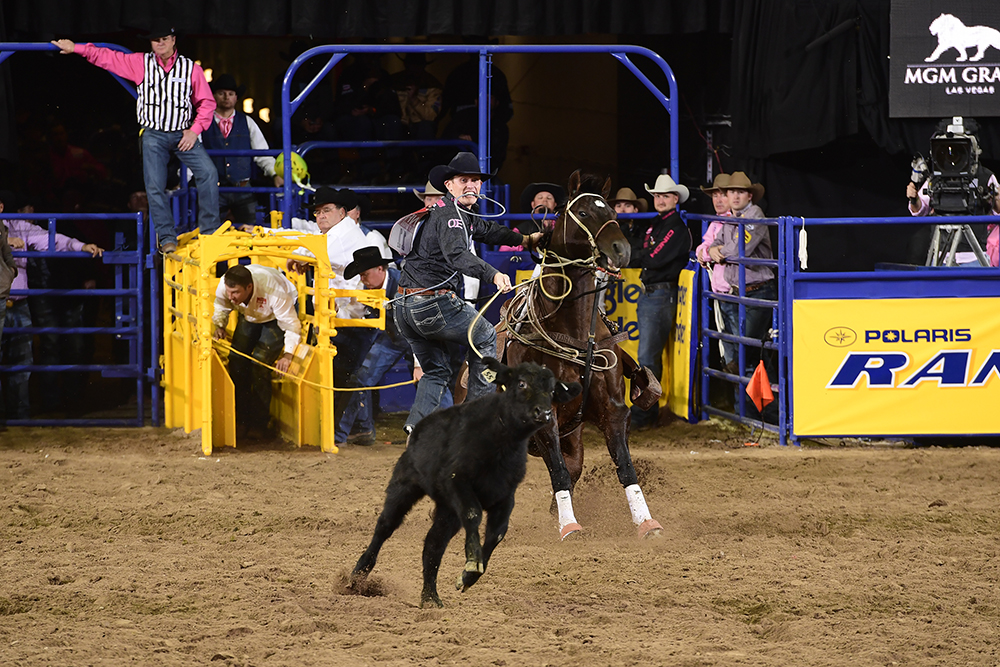 LAS VEGAS – When prospecting for gold in the Nevada desert, the best tool anyone can half is patience.

It can be easy to take a short-cut to find the path, but it’s better to dig through a variety of opportunities to seek out that vein that will reward the sacrifices and provide the biggest bounty.

That’s been Tuf Cooper’s approach during the National Finals Rodeo. Patience has been the key. He’s rifled for the gold in recent years, only to find the results sporadic at best. On Monday night, he roped and tied his calf in 8.0 seconds, a strong, consistent run that also paid him $11,000 for finishing fourth in the fifth round.

With that, he pushed his Las Vegas earnings to $47,231, aided mightily by his Round 3 victory. But the big move is in the all-important average race, where he sits No. 2 after roping and tying five calves in a cumulative time of 42.0 seconds. He trails the aggregate leader, NFR rookie Taylor Santos, by a second and a half.

Besides earning that Montana Silversmiths gold buckle, another goal for cowboys is to win that NFR average title, which will pay the winner more than $67,000 with the finale concludes Saturday night. That could play a roll into everything for Cooper.

He continues to be in the hunt for two world championships: the all-around and tie-down roping. It will depend on what happens in Las Vegas to see who is crowned in both. He is third in the all-around, $38,475 behind bull rider Stetson Wright and less than $18,000 behind the runner-up, team roping header Clay Smith.

While all three have competed in multiple events all season, only Cooper advanced to the National Finals in two: Two weeks ago, he competed at the Clem McSpadden National Finals Steer Roping, picking up more than $20,000 in Mulvane, Kansas. That means the all-around crown will be decided in Sin City.

In tie-down roping, Cooper’s good friend, Shane Hanchey, has parlayed two go-round wins into the lead in the standings. Cooper is fourth but is less than $50,000 behind Hanchey. The difference between the two is their place in the average; while Cooper is second, Hanchey is 10th after suffering a no-time in the second round.

As the cowboys look at the final five nights of the 2019 ProRodeo campaign, the races are heating up, just as they should be.