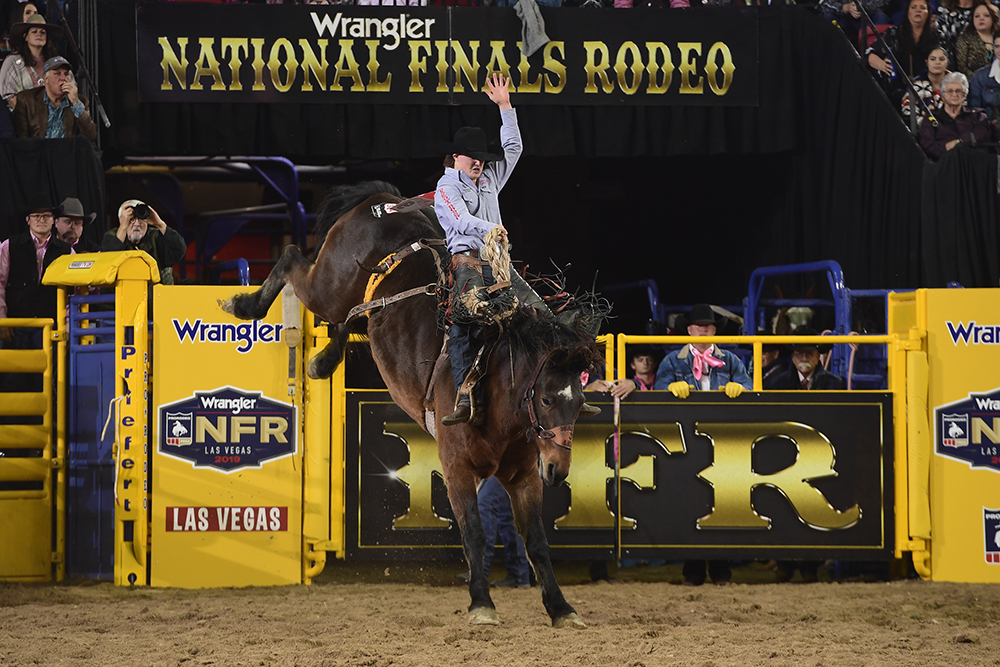 “I’m kind of just working into the Vegas atmosphere,” said Gordon, who earned his first paycheck of this year’s National Finals Rodeo on Monday night. “It is not going as I had planned, but it is going to change around toward the end of the week.”

It took four days for him to get acclimated to the Nevada desert and all that goes on in Sin City over this magical 10 days. This is ProRodeo’s grand finale, and there’s a pucker factor in the Thomas & Mack Center that can’t be felt at any other rodeo across the country.

On Monday night, he matched moves with Frontier Rodeo’s Maple Leaf for 82 points to finish in a tie for sixth place. That was worth $2,115, but it also might be the stepping stone he needs.

“That was a really good horse,” said Gordon, 22, of Comanche, Oklahoma. “She’s really strong, slow. I got a little loose there toward the end, but I got to finish it. It got the ball rolling for the rest of the week. Hopefully it keeps leading to good things.”

He qualified for the NFR as the No. 14 in the world standings with a little more than $91,000 in regular-season earnings. Only the top 15 contestants in each event graduate to compete in the championship, so it’s a special occasion for the young cowboy to be playing amongst ProRodeo’s elite at its premier event.

He still has five more chances to cash in. He may have missed out on opportunities through the first four rounds, but the NFR is at its halfway point. Go-round winners pocket $26,231 each night, so he has a grand chance before him. He found himself on the winning end just in time.

“All the horses were extremely good, and there wasn’t one you wouldn’t want to get on,” he said.

Maple Leaf is pretty special. She was the 2013 PRCA Saddle Bronc of the Year, so it was a great draw for Gordon. He also leaned on thoughts from one of his traveling partners, Wade Sundell, the reigning world champion who has eight NFR qualifications to his credit.

“Actually, he called me (Monday) morning when he found out what I had and told me what to do on her,” Gordon said. “That was a big help. He was the one who told me not to spur her out for two jumps. I was sure glad I didn’t do that.”

Sundell also offered other tidbits of advice that became helpful.

“It’s just a rodeo and that I shouldn’t try to hard,” Gordon said. “I think those first few rounds, I was trying to make stuff happen instead of just letting things happen. That was the main thing to night, that no matter what happens, just go out and have fun.

“When you’re looking at $26,000 a round, you’re thinking you need to do the best you can, but really, you just need to not think about it and just do your job.”