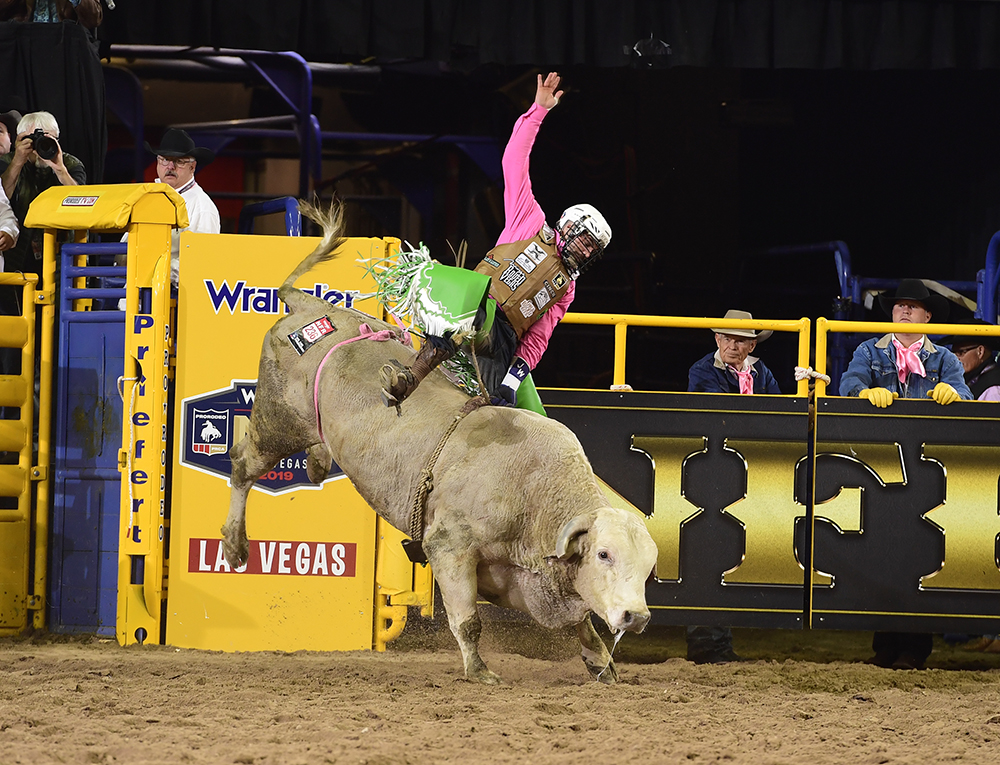 LAS VEGAS – Jordan Spears’ philosophy about riding bulls at the National Finals Rodeo is pretty simple, but it might just work out well for him after all.

“My dad always said, ‘If you ride every one, eventually they will have to pay you,’ ” said Spears, originally from Redding, California, now living in Caldwell, Idaho. “It’s great to win money here, but I can’t complain. I’ve not been placing as high as I want, but I have been doing my job.

“With bull riding, if you just keep doing your job and staying on, you will get paid eventually.”

He earned his first paycheck of the 2019 NFR by riding Flying U Rodeo’s Countin’ Cards for 86 points. With that, he finished in a tie for fifth place in the fifth round and pocketed $5,500. More importantly, it was the third time in five nights he had a qualifying eight-second ride. Now he sits sixth in the all-important average race with a three-ride cumulative score of 252.5 points.

That’s big, because none of the cowboys has ridden all five so far and only two have ridden four of five. If Spears can remain consistent and battle to stay on, he can really cash in when the NFR concludes Saturday night. The top aggregate score will pocket a bonus worth $67,269.

Of course, it’s nice to be matched with a bull he’s been around.

“I’ve seen him quite a few times,” he said of Countin’ Cards. “I was born in Grass Valley, California, which is about an hour from Flying U. I have seen that bull the last couple of years, and I’ve always wanted to get on him. I was really excited about my match-up with him.”

It also was proof that the hard work he put in prior to arriving in Las Vegas is paying off.

“I went with working out and focusing a little more on being prepared when I got here for the 10 rounds,” Spears said. “Halfway through, I feel as good as I did on Day 1. Physically I am fit and ready for five more bulls. Dedicating myself and putting my all into winning as much money and being as healthy as I can, I can definitely tell a difference.

“From being her the last few times, I have learned from it. I’m starting to get a little smarter and just trying to do my job and stay on every bull I can. Being in shape is definitely helping, and being fit is a big part of staying healthy after 10 days in a row. It is a little tough on you.”

It also affects the mental aspects of the game. In bull riding, 95 percent of what happens on a bull is based on a mental approach. Riding bulls is muscle memory and reaction, and Spears is working hard to not let the outside stuff affect him.

“I’m not worried about the average or winning the round,” Spears said. “I’m just keeping it simple and trying to stay on every bull. I’ve been doing pretty good so far.”