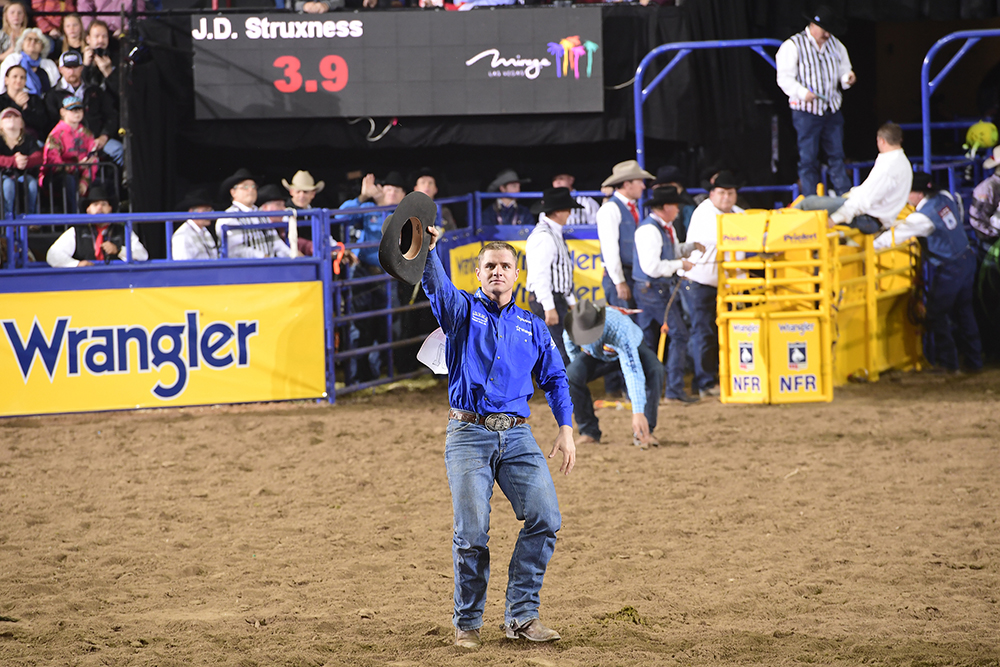 LAS VEGAS – When J.D. Struxness didn’t get a time in Monday’s fifth round of the National Finals Rodeo, some saw it as a devastating situation.

Struxness saw it as a hiccup.

“I got an outstanding start, and that steer fell to the right like they do here when you do that,” he said. “I tried reaching out there, and I couldn’t get my hands on him. We just shrug that one off. There are still nine other rounds, and we knew we had five more chances. We came back (Tuesday) night, and we were able to place again.”

“After what happened (Monday), we just needed a good, honest steer like that to come back and get our confidence back,” said Struxness of Milan, Minnesota, now living in Alva, Oklahoma. “We came back, got a good start and did our job. We won second, and we will keep moving on during the week. Hopefully we keep pulling checks in the rounds.

“(Monday) was frustrating. There were some things I could have done different to make sure I caught that one. It happened, and there isn’t any looking back when there is $26,000 on the line the next night. You just have to shrug it off, come back and stay aggressive, and try to get all the money you can in the rounds.”

He has a great deal of help, whether it’s the family in the Nevada desert supporting him or leaning on his hazer, Stockton Graves, one of his traveling partners who was his former coach at Northwestern Oklahoma State University.

As he has done all summer, he is riding Graves’ horse, Freeway, and trusts Graves to keep the steers aligned to make solid runs.

“We are going to be aggressive again,” Struxness said of the team’s approach to the final four nights of the 2019 ProRodeo campaign. “We’ll go out there, make good runs and use the animals they draw us the best we can.”