O’Connell keeps chase for the title 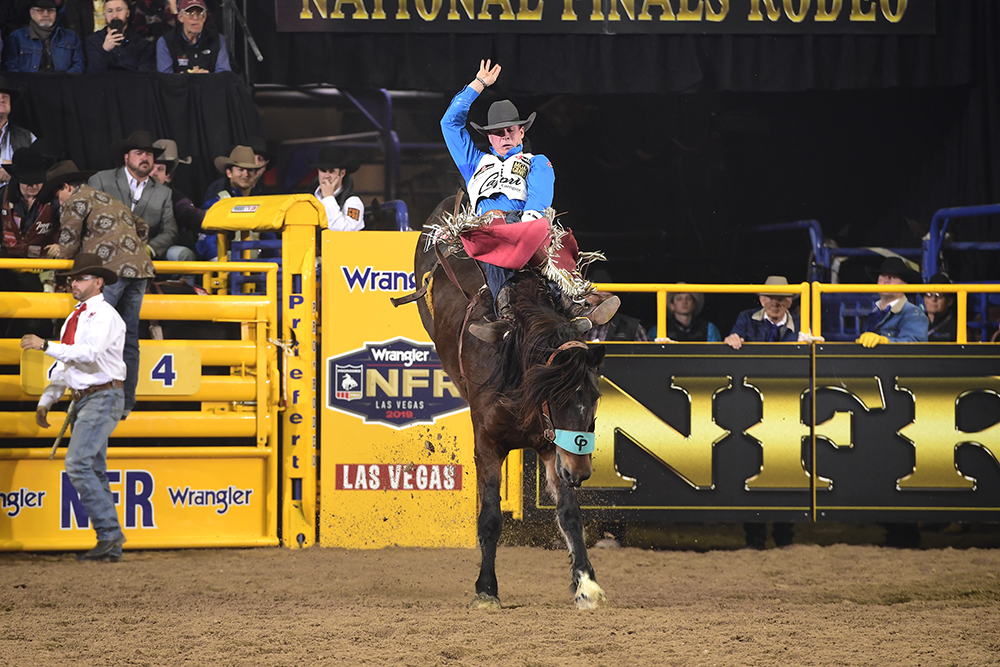 LAS VEGAS – Tim O’Connell’s confidence continues to soar at the National Finals Rodeo, and there is a good reason.

He has placed in five of seven rounds, scored big points and earned $68,385, the latest coming Wednesday night when he was 87.5 points on Pickett Pro Rodeo’s Scarlet Fever. He tied for fourth place in the seventh round and earned $8,885.

Biglow leads the aggregate standings with seven rides for a cumulative total of 615 points. O’Connell is second in the average with 609. The average winner will pocket more than $67,000, something the Iowa cowboy knows a little about. He has won at least a share of the average crown each of the previous three seasons. If he stays where he is in the average, O’Connell will add $54,577 at the NFR’s conclusion.

Through the first seven nights, there has only been one where a score of 90 wasn’t produced, and that came in Tuesday’s sixth round. In all, a dozen rides have been marked 90 points or better, which is an incredible statement on the status of the game today.

“This was the second time I had that horse,” O’Connell said of Scarlet Fever. “I spurred over the neck the first time I got on her, and it probably cost me winning Fort Worth for third time in a row. I was excited about having that horse. She has proven herself in that pen, and she was good today.

“Sometimes you have to take what you are getting. Being the second guy out of the chutes and being 87.5 is not bad.”

He sits seventh in the world standings with $181,553 and trails Biglow in the race for the world title by $111,233. Still, he remains positive that another buckle can be heading back home next week.

“I’ve still got three rounds, and I can still win the world,” he said. “I don’t doubt in my mind, and I won’t doubt until it’s over. If somebody else thinks it is locked up, they better watch out.”

Sharing this moment with his family has also been a big part of his excitement in Las Vegas. They take photos every night, and they enjoy the moment for what it is. O’Connell has earned most of his money in the last six months because he sat out the first half of the season with an injured riding shoulder that required surgery.

“This is a celebration, because this could have just as easily been taken away from me as being a world-title race. It really made me appreciate this rodeo. It made me see the bigger picture. I’ve really enjoyed this year’s NFR more than I have the past three. You’d say, ‘That’s crazy; you’ve won three world titles.’

“What I’ve done is big, but I don’t see it in my mind as anything special yet,” he said. “I will look back on it when this thing is over and see how special the year was. I still have goals and aspirations for leaving here as the four-time world champion. It’s not done.”