Struxness consistent at the NFR 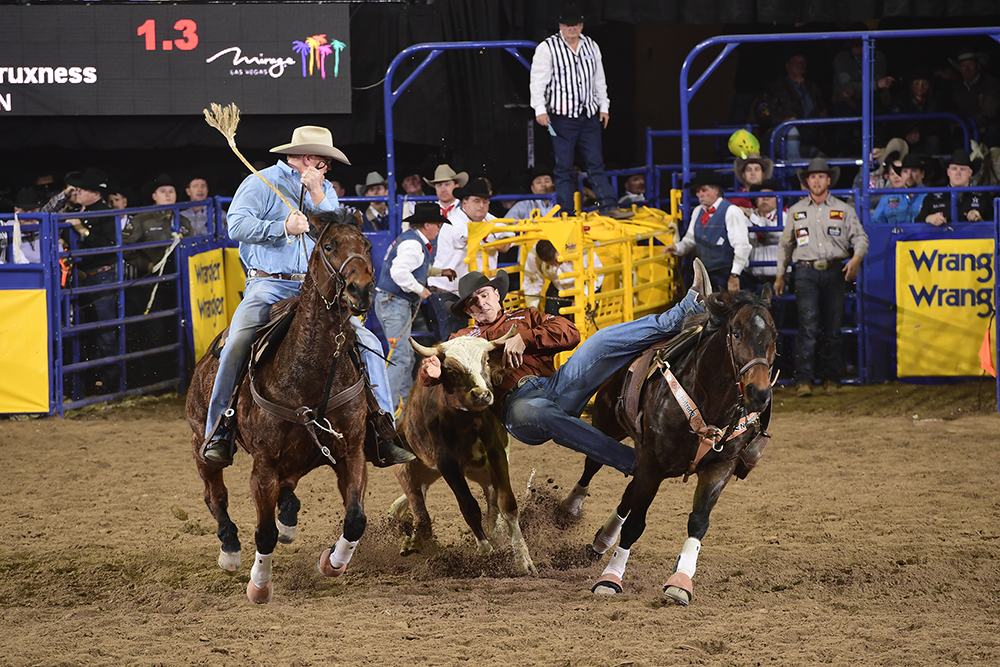 LAS VEGAS – Through the first seven nights of the National Finals Rodeo, J.D. Struxness has taken himself to the pay window six times.

It’s adding up fast. On Wednesday night, he wrestled his steer to the ground in 3.9 seconds to finish in a three-way tie for third place, pocketing $11,141 in the process and moving his Las Vegas earnings to $91,654.

“We just keep doing what we’re doing and trying to be aggressive at the barrier,” said Struxness, 25, of Milan, Minnesota, now living in Alva, Oklahoma. “I liked the steer we had tonight, but this was a more electric herd; we should be faster on these, and everybody was tonight.”

He has earned more money over the last seven days than he did through the regular season. He had collected $82,829 through Sept. 30, and with his run in Vegas, he has pushed his annual income to $174,483. He sits third in the world standings with three nights remaining.

“I say that $100,000 is the minimum I want to win out here,” he said. “Of course, we can set our goals a lot higher than that, but to come out here and win that kind of money is great. We’re going to be able to do some stuff and take care of that baby.”

Everlee Struxness turned a month old in Las Vegas, and he has kept himself and his family away from the strip and at a resort best fitting for them.

“It’s a bit more relaxed for her, and it’s away from the hustle and bustle,” Struxness said. “She is at ease, and it takes the stress off me. I’ve been able to come out here and do my job.”

By placing in the rounds, he continues to be dominant in earnings, but a missed opportunity in the fifth round has left him behind. World standings leader Tyler Waguespack leads the aggregate race; if the reigning world champion holds on to that, then he will add more than $67,000. That’s a distinct advantage.

“I’ll just take care of what I can take care of, and we’ll go from there,” Struxness said.

As he looked over photographs of his previous runs, there was a common theme. Each action image looked the same as the one before. That’s a good thing. The proof is a 3.8-second run in the first round and three more 3.9s to follow

“That is what we practice for out here,” he said. “If you can set it up, it is more of a reaction when it comes to having to throw steers in 3 seconds. The more you can set up the same, the better it is. You are just making the same run over and over. Our run has been 3.9.”