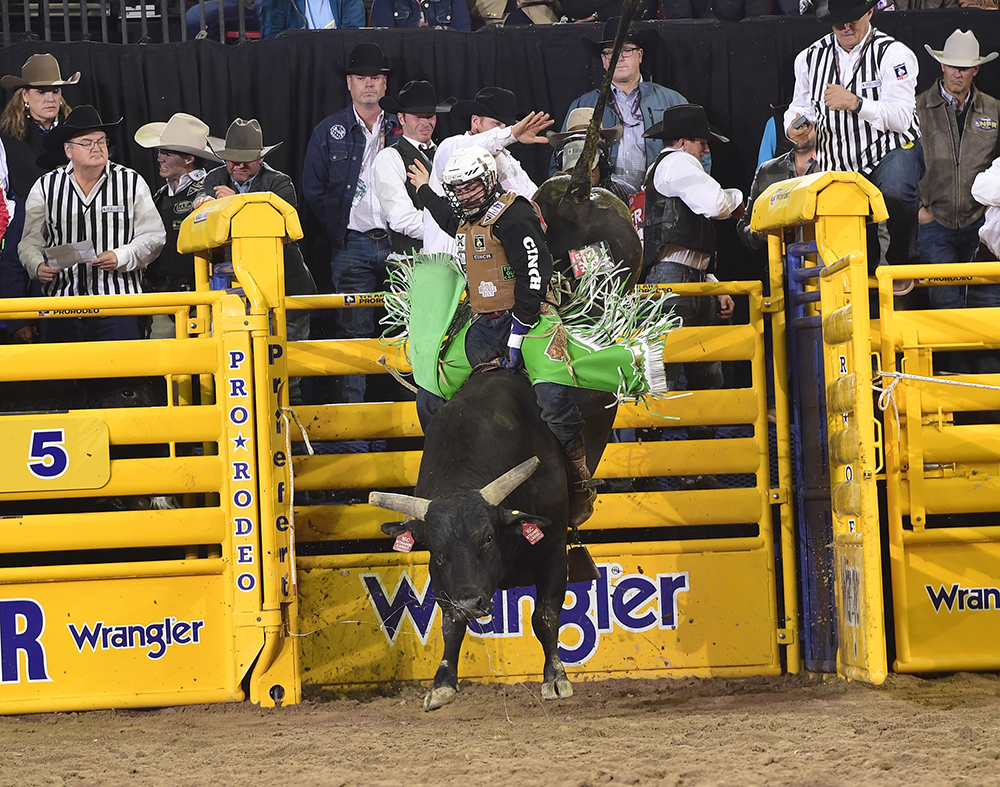 LAS VEGAS – Jordan Spears has ridden five of eight bulls at the National Finals Rodeo as he prepares to close out the final two nights of the 2019 ProRodeo season.

That’s 63 percent, and that’s awfully good in bull riding. It’s especially good at the NFR, which features the best bulls in the business. On Thursday night, he rode Powder River Rodeo’s Strange Cargo for 89.5 points, a score that would win most rodeos and most rounds at the sport’s premier event.

“I always worry about doing my job and letting the judges figure out where I sit,” said Spears, a four-time NFR qualifier from Redding, California, now living in Caldwell, Idaho. “I was pretty excited getting off that bull. I think I made an awesome ride. I did exactly what I wanted to: I stayed to the front and stayed square.

“I had to ride that bull perfect, because he was really bucking. That was a great pen of bulls. The guys rode great. I was just lucky enough to catch fifth place.”

Reigning five-time world champion Sage Kimzey highlighted the night with a 94-point ride, but there was a 93.5 and two 91.5s in the mix to push Spears’ to fifth place. For the Californian, he knew he had a good match in Strange Cargo.

“I just saw him earlier in the week with Trevor Kastner,” he said. “I knew he was going to buck. They just switched pens on him, because he was pretty bucky the first time, so they moved him to the rank pen. I was glad to have him and excited about it. He was a little buckier than I thought he was going to be, but I’m glad it all worked out.”

It comes down to a solid approach and a focus on handling the basic fundamentals that come with riding bucking beasts.

“Consistency kills,” Spears said. “Look at Sage Kimzey. He is consistent throughout the year and at the NFR, and look at how many world titles he has won. I just try to do my job every time, approach every bull with a clear mind and ride as many as possible throughout the year.