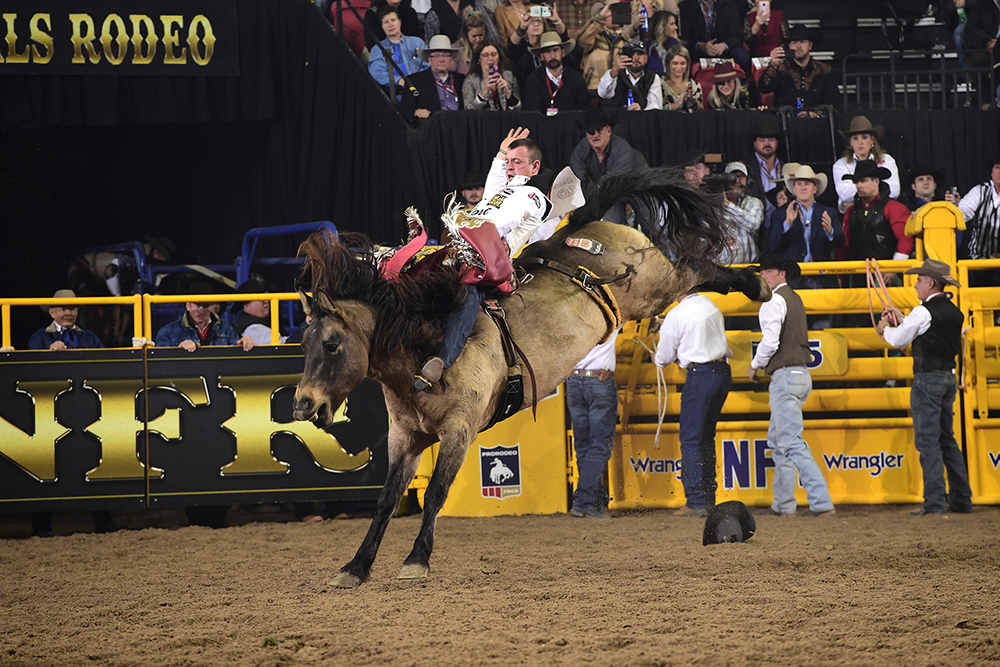 But Tim O’Connell’s face wreaks of disappointment. He plowed through the latter parts of ProRodeo’s regular season, earning more than $100,000 in three and a half months to put himself in a position to grab a fourth straight Montana Silversmiths gold buckle. But those dreams were dashed after Thursday’s eighth round of the National Finals Rodeo.

“It is what it is,” said O’Connell of Zwingle, Iowa, now living in Marshall, Missouri. “I am upset that I can’t win the world, but I’m proud of what I’ve done this year. I’m not done here by any means. I’m still going to hunt for a round win (Saturday), and I’m still going to be as aggressive as the first round or the first horse I came back on.”

Californian Clayton Biglow has a stranglehold on the world title, and it would take some serious things to go against him in the 10th and final round of ProRodeo’s grand championship to keep him from grabbing that coveted trophy buckle.

“It was Clayton’s year,” O’Connell said. “This is a kid I said I was going to have to watch out for, and he’s done it this year the hard way. He didn’t have a major win like Houston, didn’t go to San Antonio and didn’t do good at The American. He showed up and showed out all year.

“He’s going to be a great champion for this year. He is going to pretty much break everybody’s record. I feel like I did everything in my power to display my talents this week working with what I had.”

Yes, he did. He has placed in six of nine rounds and collected $72,615 in NFR cash. He sits seventh in the world standings, but he stands to gain ground on that when Night No. 10 comes to a close to finish out the 2019 ProRodeo campaign. He is second in the average and needs to score 80.5 points Saturday night to break the aggregate record set by Kaycee Feild in 2011.

The thing is, he trails Biglow in the average race by 13.5 points, so Biglow should break that mark, too. If O’Connell remains second in the average, he will pocket an additional $54,577 on top of what he’s earned in the rounds. He sill has a good chance cash in Saturday night; he is matched with Pickett Pro Rodeo’s Top Flight, which has been one of the most electric bucking horses in the game the past decade.

The first time this pen of horses was out on Monday night, Richmond Champion scored 89 points on Top Flight to finish sixth. In most rounds at the NFR, that’s a winner, but not this year. There were four scores in the 90s that round.

“Our locker room is filthy,” O’Connell said. “Not only is our stuff scattered everywhere, but it is the best guys that ever touched this arena.

“This is the toughest NFR I’ve ever been a part of, and I’m having a great NFR.”