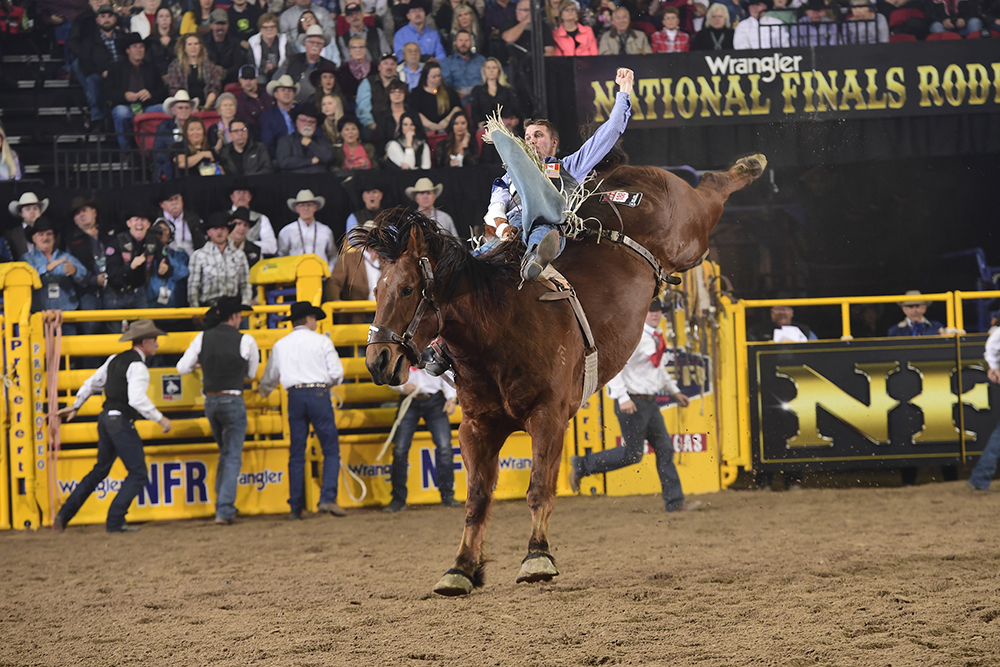 Like every other contestant in the field, he had hoped to claim the Montana Silversmiths gold buckle awarded to the world champion. He ran into a buzz saw in Californian Clayton Biglow, who won five rounds and earned more than $240,000 in the 10 days of the National Finals Rodeo.

Still, Larsen did quite well himself, placing in six rounds, including the fourth-round victory, and pocketed $122,962 in the process. He finished the year with $296,404.

“This is definitely a personal best for me,” said Larsen of Inglis, Manitioba, now living in Gering, Nebraska, with his wife, Alexa. “This is the finals where you are pretty sorry to say goodbye. It’s been an emotional roller coaster for me throughout the years. God definitely delivered on all of our prayers inside and outside the arena. We are fortunate for that.”

Part of that had to do with his brother, Tyrel, and Tyrel’s wife, Chaney. They are expecting their second child, a little boy who was diagnosed with spina bifida in utero. Chaney Lathem and the baby underwent surgery earlier this week in Baltimore, and the prognosis for both is great.

“It was huge,” Orin Larsen said. “Anytime one of your own family members is in some sort of stress or some sort of trouble, it’s harder to focus because you care and love them so much. To be able to stick your nose to the grindstone and grind out putting God first is big. His faith and healing are first. He has everything handled.

“Once I realized that and my wife told me that, it was go-time.”

While it was man vs. beast, Larsen knew he was in a race for the world title with Biglow, who was dominant over the past 10 nights. Biglow finished nearly $130,000 ahead of Larsen on the money list.

“I love Clayton to death,” Larsen said. “He is a great guy and a great champion. He has a lot of titles under him. There is not one person prouder of him that I am.

“I rode my best all year, but I don’t think I rode the best in my career. I feel like we are just getting warmed up. The more I progress throughout my craft and my skill, the more excited I am for next year.”