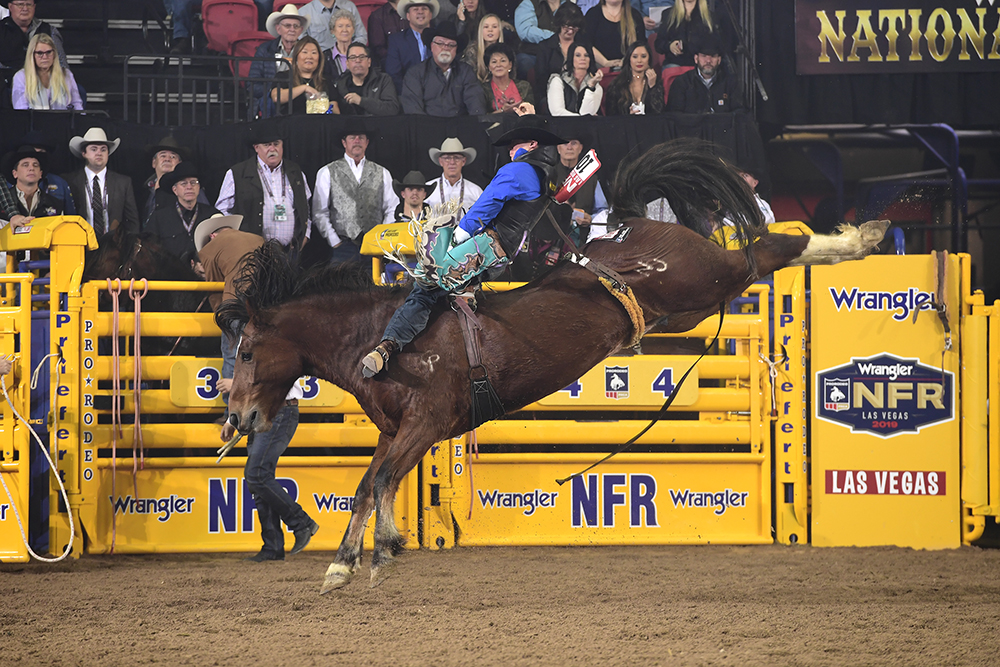 LAS VEGAS – When Tanner Aus took a no-time on his first horse of the National Finals Rodeo, he didn’t know what to expect the rest of the championship.

It turned out pretty well for Aus, competing in Las Vegas for the fourth time in his career.

“That was a lesson I learned in 2016; you can have a bad round and be out of the average and still have a good finals,” he said. “You just have to keep swinging for the fence. I had another good horse tonight. It was fun. I’m sad it’s over.”

On the final night of the 2019 season, he rode Pickett Pro Rodeo’s Top Egyptian for 88.5 points to finish fifth in the 10th round, worth $6,769. He also found his way into the aggregate payout, riding nine horses for a cumulative score of 783, which was worth an additional $6,346.

In all, he exited Las Vegas with $91,865 and pushed his season earnings to $173,460. It was the second-best NFR and season he’s ever had, and scoring big points on the final night was a big factor in it all.

“I had been on that horse one other time in Licking, Missouri, in June 2018,” said Aus of Granite Falls, Minnesota. “He was pretty young then, and she was more colt-like. He had a monster trip the first time he was out, so I was pretty happy to see that I had him.

“He was a little more than I expected tonight. I don’t really know if it was my focus or the atmosphere, but he was hard to track. He felt wild and was really fun.”

Aus and others do this because of the fun, but also because they’re good at it and can make a living doing so. Rodeo’s not an easy lifestyle, but it’s one filled with passion. Being one of the elite cowboys in the game gives him the chance to make good money in a short time, and averaging nearly $9,200 a day for 10 days in Vegas is a good thing.

“I’m very thankful that I get to do this,” he said. “I do it for a living, but the money is secondary. I couldn’t do this without the support of my family. I’m thankful to be here. I’m still feeling good after 10 nights, and I’m eager to start the 2020 season.

“We will just try to keep it rolling and keep riding bucking horses.”