Duvall closes NFR with a bang 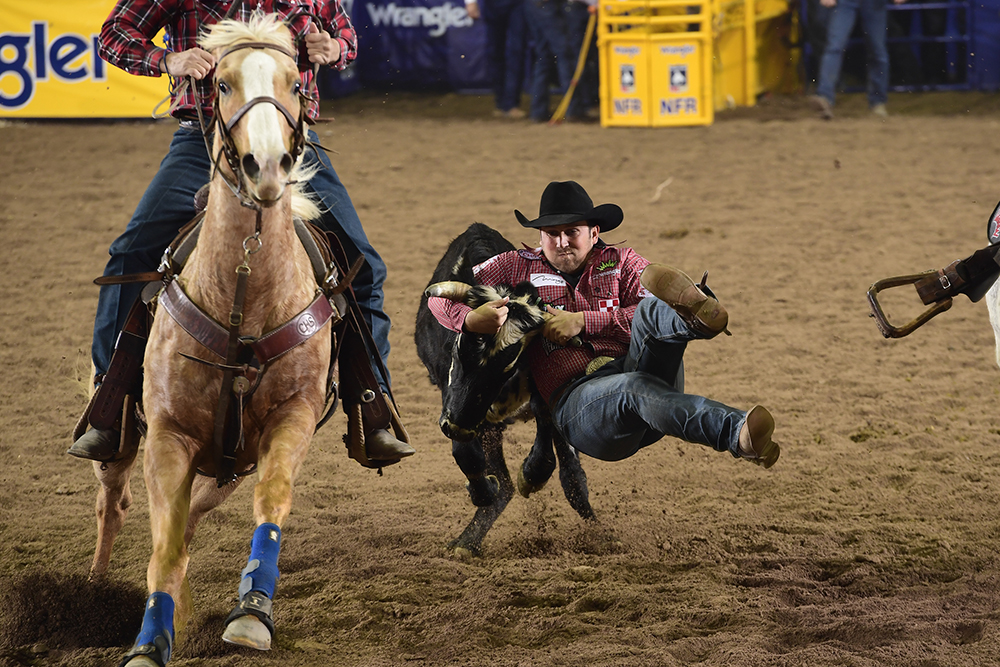 LAS VEGAS – There wasn’t much luck for Riley Duvall in the City of Entertainment through most of the 2019 National Finals Rodeo.

That changed as the final few rounds bore on, and he found a way to get a big payday in Las Vegas. On Saturday night, he wrestled his steer to the ground in 10.1 seconds to close out his 10 nights in the Nevada desert. It was his slowest run of the NFR, but it was the most profitable.

“I wasn’t nervous all day, and there was one steer I didn’t want to draw; that was the one I drew,” said Duvall, who finished the championship by wrestling 10 steers in a cumulative time of 54.8 seconds to finish second in the aggregate behind Texan Matt Reeves. “On that steer, they have been a no-time, 14 seconds and (Tyler) Waguespack had been 4.7, but Wags gets by the bad ones way better than I do.

“I just wanted to hold on, throw him down and get my money.”

It was a heck of a payday, too. By finishing second in the average, he pocketed $54,577 and pushed his NFR earnings to $80,231. He had placed in just one round – a third-place finish on the fifth night – but stayed consistent. It paid off.

“That hasn’t sunk in,” said Duvall, a three-time NFR qualifier from Checotah, Oklahoma. “I had won ($15,654) over nine rounds, and I more than tripled. My wife will be happy.”

So will Checotah, the Steer Wrestling Capital of the World. Despite the struggles in Las Vegas, he found some things he wants to work on for next season and, hopefully, next year’s finale.