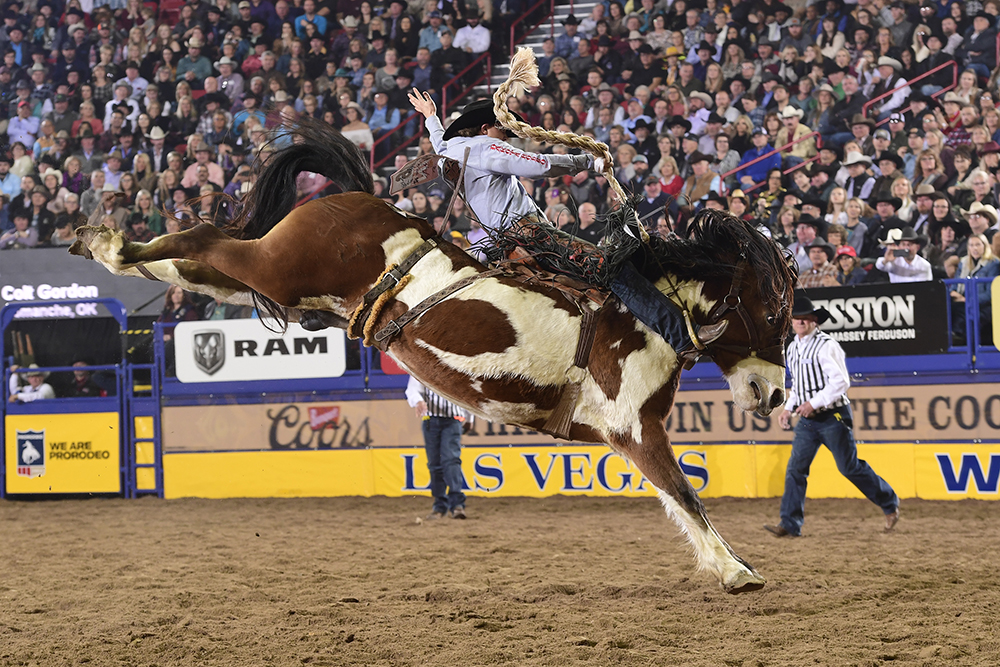 His first trip to the National Finals Rodeo was quite a classroom, and he gained some valuable lessons over the 10-day championship. It came to fruition on Saturday night, when he rode Stace Smith Pro Rodeo’s Top Hat for 87.5 points to finish sixth in the 10th and final go-round.

“That is the highlight of my NFR,” said Gordon of Comanche, Oklahoma. “We will be back next year to hopefully make it all go that way.”

Top Hat has been around for years and has been one of the best over that time. The long-maned paint has guided many cowboys to the pay window and likely will continue that trend as long as it’s performing at an elite level.

It marked just the third time in 10 rounds that the Oklahoma cowboy earned Las Vegas money in his inaugural run at the NFR. He learned just how difficult it can be to compete in the pressure-packed championship. In all, he earned just $21,564, but he gained a boatload of experience.

“You just have to keep everything simple,” he said. “A guy can get to overthinking everything trying to win more than just doing his job, doing what he likes to do and just having fun. I felt like I had everything together, and it just didn’t go my way.

“You never quit learning. There is always an opportunity to improve. You have to keep an open mind and just keep trying to be better. You try to make everything perfect, but there is no such thing as perfect.”

As the NFR closed, he returned to southern Oklahoma and will celebrate his season, one in which he earned $112,635. They can talk about the sights of Vegas and competing inside the storied Thomas & Mack Center, which has hosted 35 of ProRodeo’s grand championships.

“My sponsors have supported me, but no one has my back like my family,” Gordon said. “To have them in the stands, just to have them here knowing that somebody is there for me, that is a huge thing to me.

“It has probably been harder on them than it has been for me. They love it, and they are my biggest fans, but they are 100 percent ready to be back next year, and so am I.”