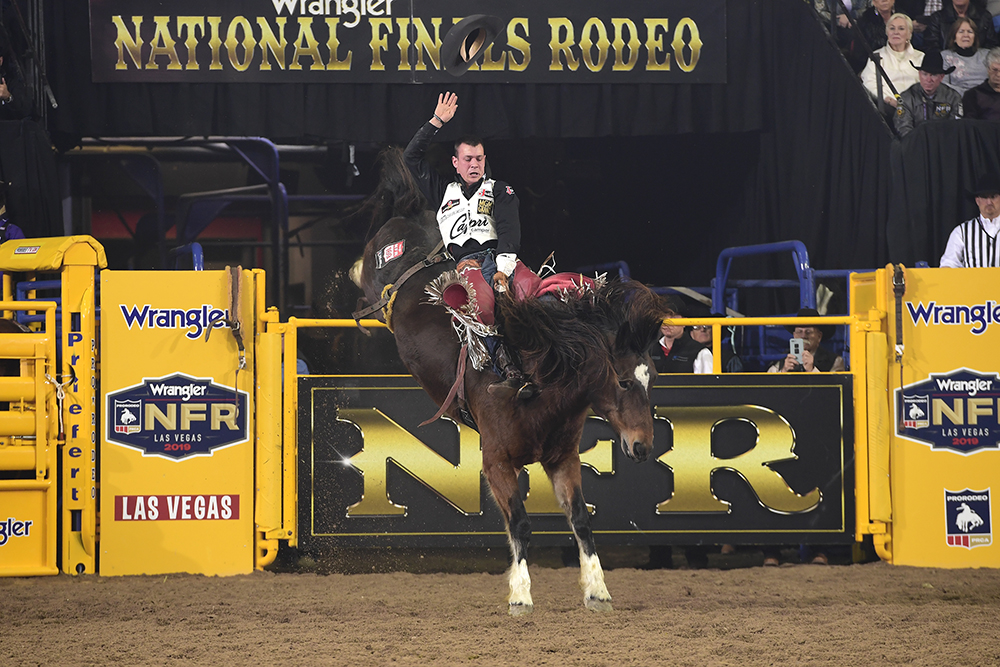 LAS VEGAS – The smile returned to Tim O’Connell’s face on Saturday night after he concluded the toughest test in his sport, the National Finals Rodeo.

The three-time world champion had seen is dreams dashed for a fourth straight a couple days before, so there was disappointment. Still, he finished the 10-day championship off with a bang, riding Pickett Pro Rodeo’s Top Flight for 91.5 points to finish second in the final round.

“I didn’t win as much as I did last year, but I just shattered Kaycee (Feild’s) average record, which stood for years,” said O’Connell of Zwingle, Iowa, now living in Marshall, Missouri. “But then 10 minutes later, Clayton (Biglow) shattered my record … by 15 points.

“Averaging 87 points for 10 nights straight? That’s how I ride. I ride smart; I ride aggressive. This was Clayton’s year. I only rodeod for three months and I still finished third in the world, so I’ll take it.”

A riding-shoulder injury he suffered in the 10th round of the 2018 NFR cost him all but three months of regular-season competition, be he returned to action in late June as a man on a mission.

It also featured a large number of great bucking horses, of which Top Flight was one.

“She brought it tonight,” O’Connell said of the bay. She gave me every opportunity to get after her, and she gave it right back to me. It was a great-feeling ride. It was a great way to end my 2019 season. I started the 2019 season with a buck-off, and I ended it with a 91.5.”

O’Connell finished the year with $261,091. It was a solid campaign, which gave new meaning to his resilience.

“This year has rekindled my love for the game,” he said. “Having it taken away from me was the best thing that has ever happened to me, because I was only seeing these buckles and that gold.

“I feel like I lost the love of rodeo. I truly love riding bucking horses. I love to compete at the highest level against the best guys in the world. But it was a great ride this year. I got to do a lot of things I normally don’t do. I have one month off, and I’m going to spend it with my wonderful wife and beautiful son.”