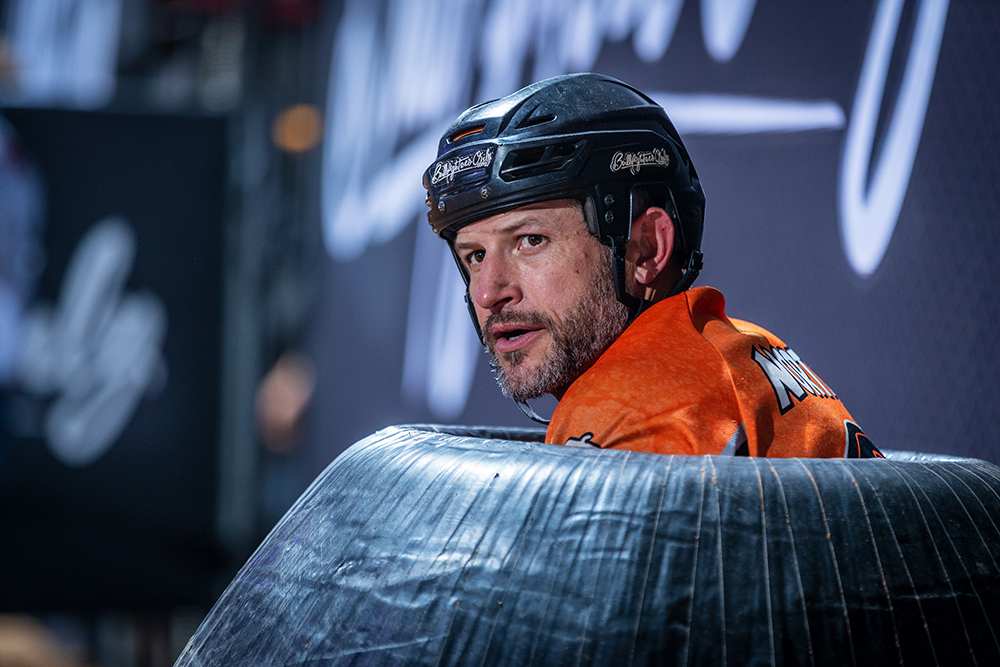 LAS VEGAS – Barrelman Andy North is the most respected man in Bullfighters Only, and that respect comes from the men he protects.

“Andy is a man who has perfected his craft,” said Aaron Mercer, the 2019 BFO World Champion from Calgary, Alberta. “He reads cattle and reads the situation, and he’ll move when the bull makes the move to put a guy in a bad position. All of a sudden, he is there and saves your ass.

“He’s a man with a purpose. When he speaks, you listen.”

North is more than a man in a barrel, an enticing target for Spanish fighting bulls to hit. No, North is part bullfighter, part man in the can. He’s done both for years, and he can read the bulls as well as, if not better than, the men he’s there to protect.

During the BFO’s year-end championship in Las Vegas, North took part in his 1,000th BFO bullfight, a milestone that may never be matched unless he’s the one who does it. It’s a telling tale about his passion for the game while seeing – and feeling – the action up close and personal.

“I think it speaks so much for the BFO,” said North of Piedmont, Oklahoma. “I’ve fought 1,000 BFO fights, and I haven’t fought all of them. I think it’s awesome for Bullfighters Only and me personally for me to fight that many bulls for one organization

“I don’t know how many barrelmen could say they have 1,000 bullfights for their career, much less for one organization. To be asked to come to these events consistently is a good feeling because of the company you’re with, the men fighting bulls and their abilities. It’s a blessing to get to do it over and over.”

It was only fitting that North’s 1,000th bout came with Weston Rutkowski in the arena at the Tropicana Las Vegas. Rutkowski won the first three BFO world championships, and North has been in the barrel for a majority of his fights.

“For North, that’s a milestone in his career,” said Rutkowski of Haskell, Texas. “For me, it was satisfying, something I’ll take with me for my entire career.”

He did it while donning North’s well-known orange jersey instead of Rutkowski’s typical colors.

“Putting on orange was me saying, ‘Thank you,’ ” Rutkowski said. “It was me saying North has my respect and always will. I put away the green jersey, where it wasn’t about me, and put it more on a guy that does so much more than he gets credit for.”

That’s just the way North handles his business. He understands freestyle bullfighting, and he’s thankful for its resurgence because of the BFO, showcasing the extreme sport in a way that is wrapped in beautiful production and provides an entertaining show for all who attend.

“I love bullfighting,” he said. “I love what we do. I like to see those bulls and how each bull has his own personality, how they want to fight. I like to see these kids coming up through the ranks. I’ve gotten to see a lot of talent come through. When you see that, you realize you are part of something special.”

North is best known for making big-time saves when the bulls are taking it to the bullfighters. He uses handles attached to the inside to lift the barrel and then shuffles his feet to get in position. His speed inside of the barrel is unparalleled and his commitment to making the save often results in undesirable circumstances.

“I’m fortunate to be able to pull off some moves that a bullfighter does, but I’m doing it in a barrel with twice as many steps at half the speed,” North said. “It’s fun when you do it. When I’m watching a bullfight, I’m watching their technique, watching where the bull is. When those two things get out of line, it’s a pretty good indicator of when I need to move. That’s why those saves seem so big.

“Have a helmet on has emboldened me. I feel like my head is protected, and I’m confident in my abilities and know where that barrel is going to end up. It’s a high-risk high-reward kind of thing.”

The bullfighters appreciate it.

“Andy North’s job is as important as having a good bull for a high score,” Rutkowski said. “He can step in and change the way an injury can happen. You can slip, and North can make a few steps and take the bull away from you.

“He can’t stop every wreck from happening, but without North in the arena, there’d be a lot more wrecks.”