Rumford to shine at Guymon rodeo 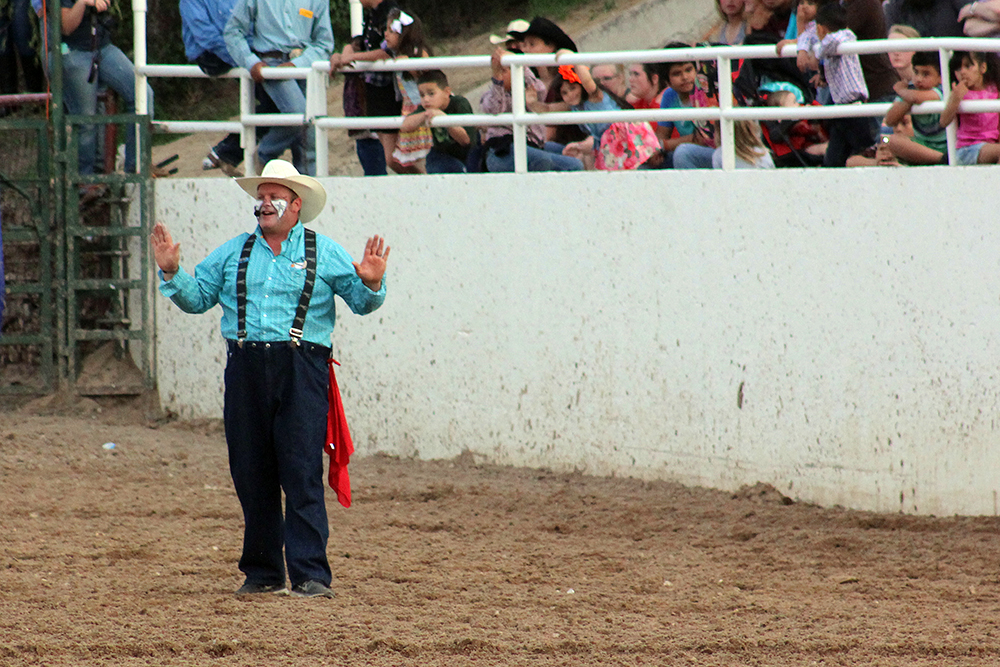 GUYMON, Okla. – Deep down, Justin Rumford is a cowboy, and rodeo has been part of his life since the day he was born.

Through his years handling various duties for his family’s stock contracting firm to his time spent on the rodeo trail, his comedic nature has shined a spotlight on the game and his own personality. Now he has parlayed that into the perfect job.

He returns to Guymon Pioneer Days Rodeo for the second time in four years. As the reigning eight-time Professional Rodeo Cowboys Association’s Clown of the Year, Rumford will be one of the featured pieces of the rodeo, set for 7:30 p.m. Friday, May 1; 2 and 7:30 p.m. Saturday, May 2; and 2 p.m. Sunday, May 3, at Henry C. Hitch Pioneer Arena.

“I competed in the ProRodeo at Guymon seven times in steer wrestling and a few other times when I was in college,” said Rumford, a third-generation cowboy now living in Ponca City, Oklahoma. “I always liked Guymon, because it seems to be the main takeoff for rodeo for the spring and summer run.”

He started competing as a youngster growing up in Abbyville, Kansas. His grandfather, Floyd, founded Rumford Rodeo Co. His dad, Bronc, was an all-around champion who took over the stock contracting firm, and Justin joined in the family business.

In his lifetime, he’s done just about everything possible in the sport, but he’s found his calling dressed in baggy clothes and wearing greasepaint. It’s the perfect combination of a witty personality raised on rodeo.

“This clowning deal is the best thing I’ve ever had,” Rumford said. “It’s something in rodeo that I can have a lot of longevity in. There’s not a ton of risk, and it’s something I enjoy so much.”

It shows in and out of the arena, a place he knows like the back of his hand. He’s roped and wrestled, ridden bucking horses and fought bulls. He’s been a flankman and a truck driver, and he’s loved every minute of it.

“I’ve been involved in rodeo my whole life,” he said. “I’ve never done anything else, and I’ve never wanted to do anything else. I’ve always wanted to be successful. A (few) years ago when I started this venture, I knew if I really worked hard and tried really hard that I could get to the top in a hurry.”

He did. In just his second year as a full-time rodeo clown, he won the PRCA’s top award. He’s followed that the four years since, and he continues to be one of the most sought-after rodeo clowns in the game. But there are many reasons behind it.

“I have seven acts,” Rumford said. “At a lot of rodeos I work, there are lots of performances, so I like to change it up. I’m not a specialty act; I’m a clown act.

Whether it’s “Fat Elvis” on a mini bike or the Rumford rendition of Spiderman, the acts are a big part of the entertainment value. But he’s the perfect all-around entertainer, a man who understands the timing that comes with rodeo.

It’s all part of making the production come across as seamless as possible. If there is any downtime in the competition, Rumford is on hand to engage the crowd. It’s a vital piece of the keeping the family-friendly entertainment part of each performance.

“I think my specialty is walking and talking and being in the arena,” he said. “I feel like I can connect with the crowd pretty good. Even when my microphone isn’t on, I’m still talking to fans. You can do a lot without saying a word.”

That’s an integral part of being a clown; sharing a particular move or a flashing glance in the right direction. As a clown with a bit of a bigger build, it is primary target of comedy is himself.

“People want to laugh at each other more than they want to laugh at something,” Rumford said. “When I’m in the arena, I’m saying the same stuff I’d say if I wasn’t clowning. It’s just me being me.”

He looks forward to returning to the Oklahoma Panhandle to entertain, this time in front of some of the most knowledgeable rodeo fans in the country. It will be a different type of experience, but it will still be all Rumford comedy.

“I totally adjust everything,” he said. “You don’t want to push somebody on what they want to hear. When you’re in die-hard rodeo country, you have to feel it out and see what happens.

“In Guymon, they’re rodeo-savvy, but they like to party. They are my kind of people.”