West eager to defend his title 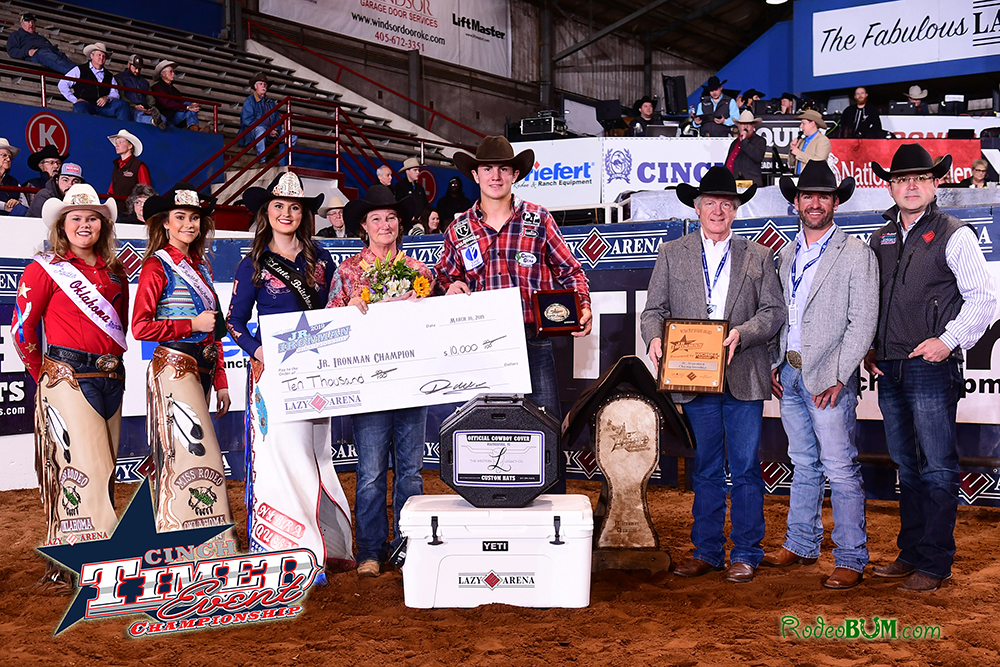 Texan has the target on his back as he prepares for the 2020 Jr. Ironman

GUTHRIE, Okla. – Tyler West had a slip on the third run of the 2019 Jr. Ironman, but he didn’t let that get him down.

He battled back over the final two days of the competition, producing an event-record 32.2-second third round to win the championship. That wherewithal proved to be beneficial, and he will return to defend his title at this year’s event, set for March 13-15 at the Lazy E Arena.

“When I think about winning it last year, it makes me want to win it again,” said West of Mertzon, Texas, a sophomore at Southwest Texas Junior College. “The first day wasn’t a good day, taking a 60 (second run). I realized I needed to just have fun. I realized it was just like going to rodeos and doing what I love to do.

“Having fun carries into winning.”

In both the Jr. Ironman and the CINCH Timed Event Championship, a 60-second run is the equivalent to a no-time. For West, that happened on his first heeling attempt, the third of 12 runs he made over the weekend. But his perseverance was a building-block for the cowboy. He finished his freshman year in Uvalde, Texas, as the reserve national champion in steer wrestling at the College National Finals Rodeo.

“It’s just proof that hard work pays off,” he said of his second-place finish at the College National Finals Rodeo last June. “When you give your all to something, you can expect big things. I wasn’t expecting to finish second, but I was doing the best I could do. I was thankful for how it all happened.”

He’ll bring that back to this year’s Jr. Ironman as one of four cowboys to return from the 2019 edition: reserve titlist Trevor Meier of Garden City, Kansas; Rylen Sutherland of Benton, Kentucky; and Quade Hiatt of Canyon, Texas.

Meier, who led the race after Round 2, suffered a 60 in heeling on the final day. He finished as the runner-up.

“I’m glad I get a second chance to redeem myself,” he said. “It would be really nice to come out first instead of second.”

Like West, Meier competes in three of the four Jr. Ironman disciplines in college, where he is a sophomore at Oklahoma Panhandle State University. He doesn’t look at last year as a bad outcome; it was a learning opportunity.

“Probably the best thing I learned was keeping your head up for every run,” Meier said. “Even if something doesn’t go right, you just roll on.

“The thing I’m looking forward most to is being there with Cooper (Slavin), my cousin. It’ll be good to experience it with him.”

Meier and Slavin (of Goodwell, Oklahoma) are actually two sets of cousins in this year’s field of 10 young cowboys; they are joined by Sutherland and his cousin, Kolton Powell of Benton, Kentucky.

“Cooper and I are close enough in age that we competed at Little Britches Rodeos, junior high and high school, and we’ve roped against each other a bunch,” Meier said. “Living down here close to him, we get to practice together quite a bit.”

That practice will come in handy, as will the work done by every cowboy in this elite field. The Jr. Ironman is a tremendous challenge, battling through four timed events: heading, heeling, tie-down roping and steer wrestling. It’s a test of talent, horsemanship and mental fortitude over three days of competition.

Each round will pay the winners $750, but the biggest earnings come in the 12-run aggregate, with the winner collecting $10,000. The incentive is well worth the challenges each man will face.

“The biggest thing about that event is that being consistent wins in the long run,” West said.