Casper, Smith to ride for $1M 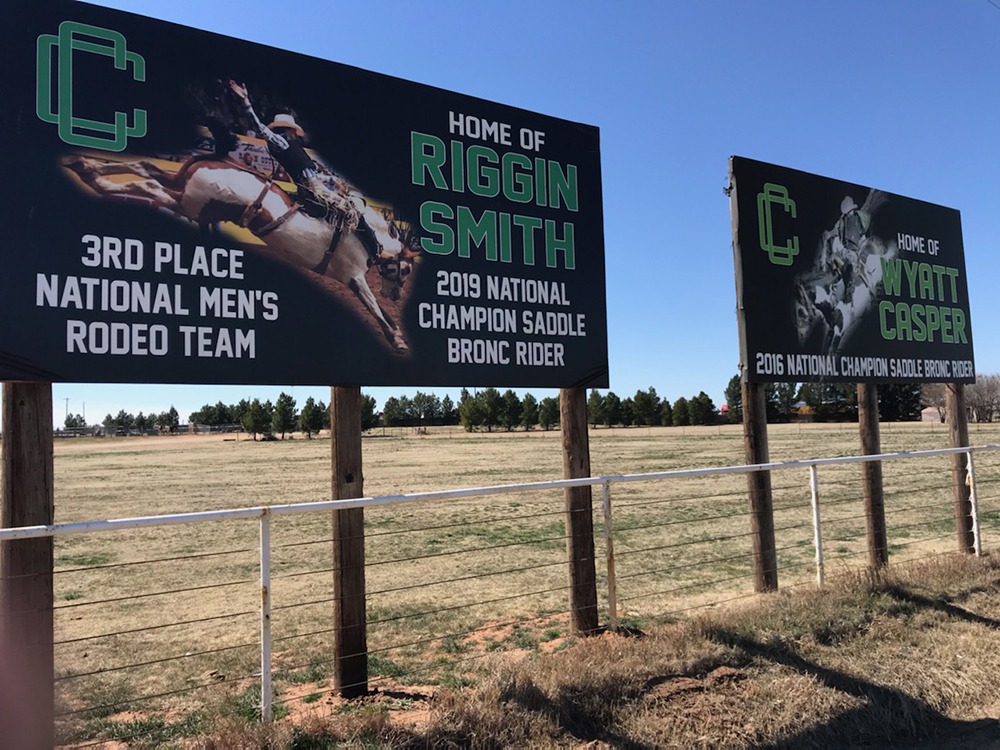 Clarendon College champions will be part of The American next weekend

CLARENDON, Texas – Halfway between Amarillo and Childress along U.S. Highway 287 in the Texas Panhandle are two billboards representing the Clarendon College rodeo team.

In a town of around 2,000 people, Clarendon College has an enrollment of about 1,100 students and two national champion bronc busters. They arrived at the small school in the small Texas town from small communities of their own – Smith from the hamlet of Winterset, Iowa, which is more than twice as big as Clarendon, and Casper from Balko, Oklahoma, a burg of around 600 people.

They’ve made names for themselves everywhere they’ve gone, and this coming weekend will test their skills on one of the biggest national stages available at The American, a two-day rodeo that will pay out more than $2 million Saturday and Sunday at AT&T Stadium in Arlington, Texas.

“It’s one of the biggest rodeos of the year, and only 16 guys get to go to it in bronc riding,” said Casper, who worked his way through a series of qualifying events and last week’s semifinals to advance into the final field. “It’s a shot at a million dollars. Winning the semifinals out of 50 guys is a big deal, too.”

Yes, it was. At The American semifinals, the 50 qualifiers each rode one horse. The top 10 advanced to Sunday’s short go-round, and only the top six earned the right to compete at “Jerry Jones World” in the Dallas-Fort Worth metroplex. There were 10 contestants per event that were invited based on how they finished the 2019 season; the rest of the field advanced through the qualifiers.

Last year, three athletes split the $1 million side pot. Each earned $433,000. All of it is life-changing money, and it’s the dream of every qualifier that has earned the right to compete in just a few days.

“This is really a big opportunity that God has blessed me with,” Smith said. “If I could win a million dollars or part of it, it would mean some financial stability for me and allow me to help my family out. I don’t really worry about too much, but you wouldn’t have to worry about money for a while.”

Sometimes it’s nice to just dream, but there’s more to it for the men from Clarendon. Rodeo is how they plan to make the bulk of their livings, and riding for money like that is an added benefit. This is actually Casper’s second qualification to The American; he also earned a spot in the 2016 field, just four months before he earned his national title at the College National Finals Rodeo.

Since then, he’s been hot on the rodeo trail. Now living in Pampa, Texas, Casper is the No. 1 man in the PRCA world standings with $66,645 – an incredible amount given that it’s just the first week of March, and there are seven more months remaining in the ProRodeo season. He owns a lead of more than $20,000 over the No. 2 man.

“I think having a few years’ experience helps a lot going into this situation,” Casper said. “It’s still a big deal, but I see these fellas every weekend. It’s going to be hard to beat them, but that’s the way it is every week. You’ve got to do the best you can on the horse you’ve got. You can only focus on what you can do and not worry about anything else.”

Some of that comes through experience, some through education. That’s why he leans on his experiences at Clarendon College.

“With two of us from there going to The American, hopefully it gets some more recruits for the college and makes the rodeo program a little tougher,” he said. “They’ve done awfully good in the last year winning the region and being tough enough to finish as the third best team in the nation.”

That’s the way Smith sees it, too. He chose Clarendon based on the original billboard, which was erected shortly after Casper won his crown. As a 2017 high school graduate, Smith noticed the giant sign upon is recruiting visit and decided to try to add another to the college’s program.

“I think having Wyatt and I make The American just verifies that if you want to be a bronc rider, Clarendon is the place to go to college,” Smith said. Coach “Bret (Franks) is so good at working with everybody, and he’s really good at teaching just about anybody.”

That’s part of why the Clarendon men won the Southwest Region title a year ago and finished third at the college finals. It’s why the Bulldogs continue to reload year after year.

It’s also why Casper is in line to qualify for the National Finals Rodeo this season and why he and Smith have a chance to make a big payday at The American.

“I’d say this is the best I’ve ever ridden,” Casper said. “I’ve ridden 100 percent of the horses I’ve attempted this year and was over 80 points on 25 of them. You’ve got to stay on them to get a score.

“I’m really wanting to go into the NFR in the top five at least and come out of there the world champion. I believe it’s going to take at least $105,000 to make the finals.”

He’s well on his way, and earning big bucks in Arlington this next weekend could make a big difference for either Casper or Smith to reach some lofty goals they’ve set for themselves.

“My goals for the year are along the same lines as trying to make the NFR, trying to win the (PRCA) Rookie of the Year,” Smith said. “One of the things I like most is riding bucking horses, and I like getting on the best ones. If you keep doing well, you’re going to go places where the horses are better. That gives you the best shot.”

It all adds up to brilliant athletes riding for the pride of Clarendon College, and they’re doing so for a chance at a million bucks at The American.

“This is huge for our program and our school,” Franks said. “We have one of the smallest colleges in the nation, and we’re getting two kids to represent us on a worldwide stage.”