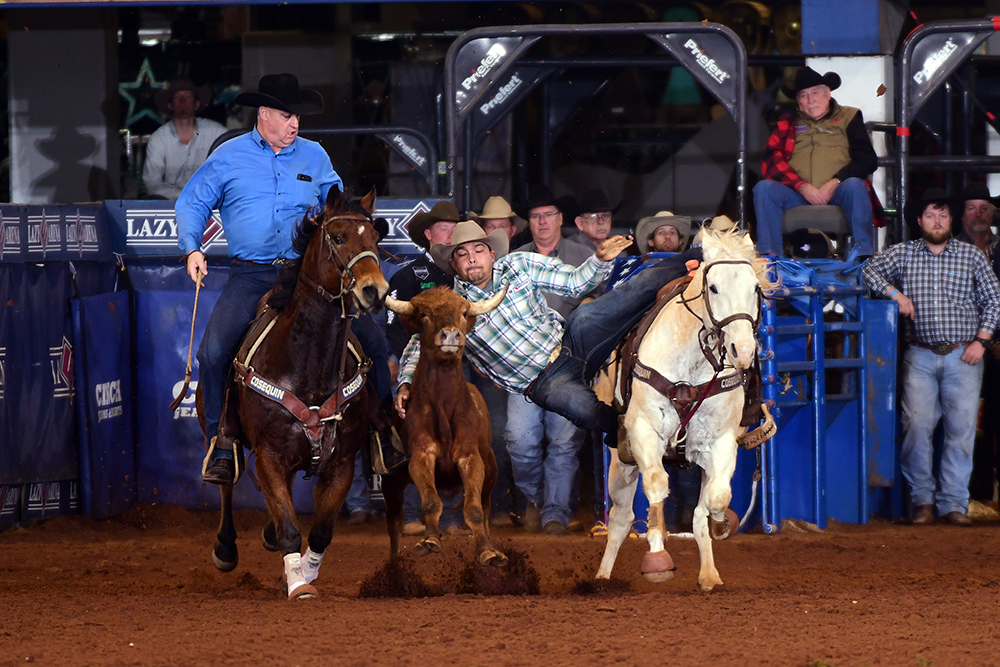 GUTHRIE, Okla. – After coming off the greatest ProRodeo season of his life, Erich Rogers entered the 2018 CINCH Timed Event Championship on a mission.

He was solid on opening day and sat second in the aggregate after the first two go-rounds. He took the lead early in the third round, then his mission came to an end with a knee injury that eventually required surgery. Still, it didn’t stop the cowboy from Round Rock, Arizona. He returned to ProRodeo a few months later and qualified again for the National Finals Rodeo.

He returned to Oklahoma a year ago and showed the grit and talent he possesses. He’s never earned the title at the “Ironman of ProRodeo,” but few have. In fact, in the 36-year history of this unique challenge, only 15 men have been crowned titlists. He’d love to be the 16th man at this year’s championship, set for Friday-Sunday at the Lazy E Arena.

“It would be awesome to win that title,” said Rogers, the 2017 heading world champion. “I’ve placed there before, but to place third last year and finish on a healthy scale, it was an awesome feeling. To win would be the coolest feeling ever. It would be another belt buckle hanging at my house, and I could show people that we did this.”

The CTEC features 20 of the greatest all-around timed-event cowboys in the game, all battling for the elusive title and a Montana Silversmiths gold buckle that comes with it. Fans from all across the country converge on middle-America to see a true spectacle take place in that historic Oklahoma red dirt. The combatants come from all over, too: Mississippi, California, Wyoming, and many places in between.

Each has a reason why competing at the CTEC is a big deal to them.

“It’s the funnest event of the year besides the NFR,” said Rogers, a nine-time National Finals Rodeo qualifier. “You have 20 of the best guys that compete in five different events, and some of them are outstanding in their own events and have to make up time in other events. It doesn’t get any funner than that.”

“What makes this so special is the comradery of the guys there. You sit there and watch those guys compete to the best of their ability, and they’re all there to help you out. You’re basically trying to help each other beat one another.”

That’s the cowboy way, and it spreads across all lines through a spectacular weekend of competition and entertainment for fans. Each day kicks off with the Jr. Ironman, which begins at 9:30 a.m. Friday and Saturday and 10:30 a.m. Sunday. It features 10 of the greatest young all-around hands in rodeo competing for the prestigious title and $10,000 provided to the event winner.

As has happened in years past, the annual chuckwagon gathering and junior cook-off will take place in conjunction with the festivities. It was named the 2017 American Chuck Wagon Association’s event of the year. Breakfast will begin at 8:30 a.m. Saturday, and the dinner will begin at 3 p.m. Tickets may be purchased through www.Ticketmaster.com.

What makes it so challenging is that each competitor must make runs in each of the five timed events – heading, heeling, tie-down roping, steer wrestling and steer roping – to complete a round. On top of that, there are five rounds spread out over just three days. For the Jr. Ironman, the 10 young cowboys will make runs in each event besides steer roping, and they will battle through three rounds.

“I love to be there for the fans” Rogers said. “To put in the work that I do and the grind that I do, it’s an awesome feeling to know they’re there to support me and the other guys.

“The whole purpose of competing there is to do our best and give the fans a good show. Without the fans, it would be tough to have the Timed Event. I feel like it’s only getting bigger and better.”