Jestes excited to return to Dodge 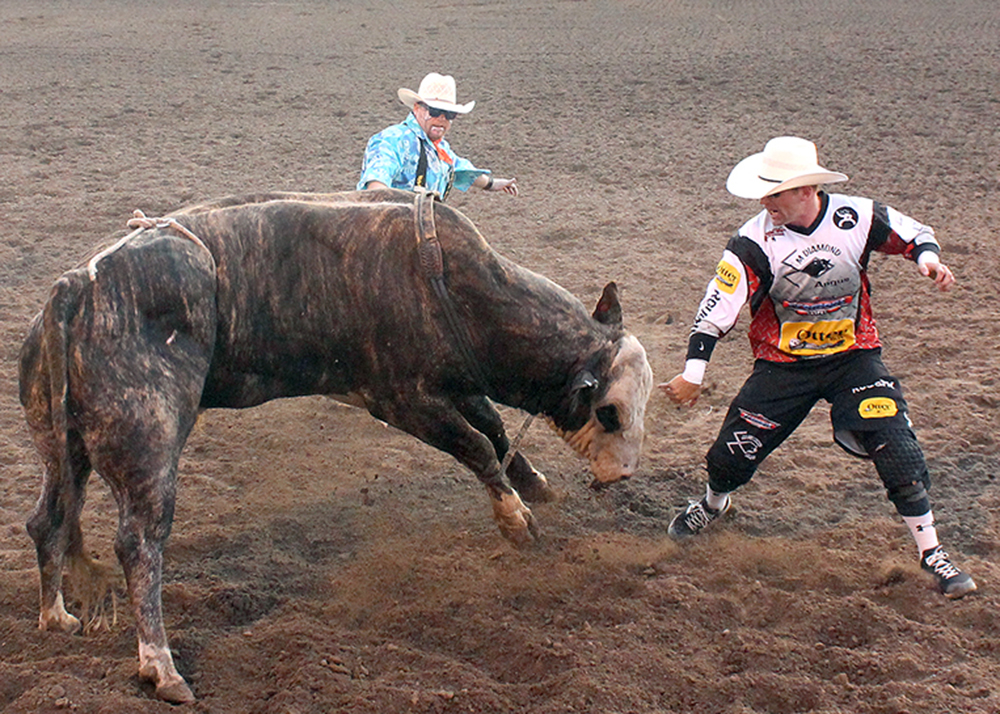 DODGE CITY, Kan. – Because of an injury he suffered at the 2018 National Finals Rodeo, Nathan Jestes missed a lot of rodeos last year.

He wasn’t about to miss Dodge City Roundup Rodeo.

Jestes – recognized as one of the top bullfighters in ProRodeo – suffered a severely torn hamstring in the first round in Las Vegas. That was in December. In the months that passed, he underwent surgery and worked through extensive rehabilitation.

Just shy of eight months later, he made his way to western Kansas to test his re-attached leg muscle and to get back to work.

“Dodge City is one of my favorite stops throughout the year,” said Jestes, who began working Roundup in 2015. “The committee is a big reason behind that. Between the committee and the community in general, they take great care of us when we’re in town. It’s one of those places that you want to be.”

He will return for this year’s rodeo, set for 7:45 p.m. Wednesday, July 29-Sunday, Aug. 2, at Roundup Arena; Dodge City Xtreme Bulls is set for 7:45 p.m. Tuesday, July 28. Through the six days of rodeo action, Jestes will work with Wacey Munsell, a veteran bullfighter from Ulysses, Kansas.

Here’s where it gets interesting. After Jestes suffered his Round 1 injury a 19 months ago, Munsell took his place through the final nine rounds of ProRodeo’s championship event. That means Roundup can boast of being one of few rodeos in the country to have two NFR bullfighters.

“Wacey does a great job in Dodge City, and I think it works out great,” said Jestes, who lives in Douglas, Wyoming, with his wife, Bridget. “It’s good to have someone that’s from around there.”

This marks his 11th season in the PRCA, protecting cowboys during bull riding. He didn’t grow up planning to be involved in rodeo, though. It just worked out that way.

“I was always involved in other sports like hockey, football and lacrosse,” he said. “Actually, lacrosse was my biggest sport in high school, and my goal was to play Division I lacrosse in college. As my senior year rolled on, I fell out of love with the sport. The more recruiting trips I was on, the more I realized it wasn’t what I wanted to do.

“At the last minute, I ended up turning away all my athletic scholarships and went to study aviation at Montana State University. I received my associate’s degree in aviation technology. While I was in school, I got a part-time job at Yellowstone Jet Center, where I met Al Sandvold, who was a professional bullfighter.”

As an athlete all his life, there was something appealing about bullfighting to Jestes. He also was a big rodeo fan, and he liked the idea of marrying his athleticism with the sport, so he asked Sandvold for help.

“Watching Al, I told myself that it was something I could do,” said Jestes, who grew up in Fort Collins, Colorado. “I asked Al if he could teach me, so every Monday and Wednesday, when the Montana State rodeo team had practice, he took me to the practices and worked on my bullfighting.

“When I graduated, I got hired as a flight instructor, and I did that for two years. I also started booking amateur rodeos.”

His building resume climbed in bullfighting meant he had to make a decision; stay with the solid job and guaranteed paycheck as a flight instructor, or take off and chase his rodeo dreams.

The people involved with Roundup Rodeo are thankful he chose the latter.

“We have really enjoyed welcoming Nate and his wife into the Roundup family,” said Dr. R.C. Trotter, president of the committee that produces the annual rodeo. “Nate is an excellent bullfighter and is a real asset to our rodeo. We hope to have him here for many years to come.”

Jestes enjoys the lifestyle. He and his wife make the trek to Dodge City a special one each summer, and they enjoy the family atmosphere that comes with the sport.

“I always say rodeo’s a big world, but it’s a small family,” he said. “At every rodeo we go to, it’s a family reunion, just in a different place.

“The most gratifying part of my job is being out there and helping my friends by being able to run into a situation where normal people would run away. You want to control the chaos to be able to protect your buddies.”