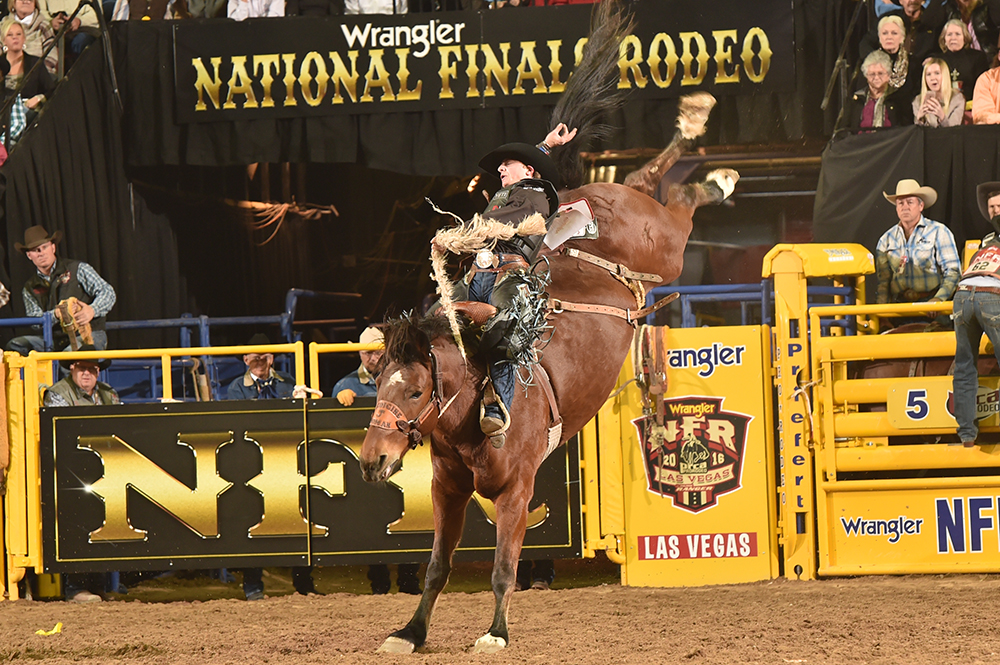 DODGE CITY, Kan. – Frontier Rodeo’s Medicine Woman first made herself well known in rodeo a decade ago, when the big mare was named the top saddle bronc at the 2010 National Finals Rodeo.

Since then, she’s been recognized as one of the best bucking horses in the game, and many of her highlight-reel performances have come during the championship round of the Dodge City Roundup Rodeo. She will be back in action at this year’s event, set for 7:45 p.m. Wednesday, July 29-Sunday, Aug. 2, at Roundup Arena; Dodge City Xtreme Bulls is set for 7:45 p.m. Tuesday, July 28.

How good is the 17-year-old bay mare? At the NFR this past December, she bucked off both Jesse Wright and Sterling Crawley, who have a combined 14 NFR qualifications. The year before, Wade Sundell marked 92 points to win the fifth round. Five nights later, CoBurn Bradshaw scored 92 to win the 10th round.

Moreover, she’s been at least 90 twice inside Roundup Arena. In 2014, Sundell rode the talented bay for 92 to win the coveted Dodge City Roundup buckle while setting an arena record. A year later, Isaac Diaz did one better, posting a 93-point marking to win the crown.

“I’ve been waiting a long, long time to draw that horse,” Sundell said that year. “That was the buckingest horse I’ve been on. When I nodded my head until I got off, I felt like I was bucked off every jump.”

Since that day six seasons ago, he and Medicine Woman have matched that score two other times, including that 2018 NFR; that was the year he won his first world championship. Over the course of his career, Sundell has qualified for the finale eight times.

Diaz has made the big show six times, including 2015 when his victory in Dodge City helped the Florida-born cowboy to a sixth-place finish in the world standings. He knows quite well how important it is to be matched with a great bucking beast. That season, he was matched with Medicine Woman twice, and he won both rodeos, including an 87.5 in Corpus Christi, Texas, that spring.

“Just to be able to draw a horse like that twice in a year is just amazing,” Diaz said in 2015. “When you draw good, it forces you to ride better.

“I feel like I rode her better this time than I did earlier this year. I feel like she bucked harder. She was all I wanted.”

That’s a powerful statement about a powerful horse. Just a few weeks ago, Rusty Wright scored 91.5 points on Medicine Woman to win the rodeo in Cody, Wyoming. Earlier this year, world standings leader Wyatt Casper was 87.5 points to place high in San Antonio.

Over the course of her career, she has been recognized as one of the top three saddle broncs in ProRodeo seven times; that includes four times that she was named the Saddle Bronc of the Year.

“That’s one of the coolest feelings to get on a horse of that caliber,” said Shade Etbauer, who rode her to the 2017 Roundup title. “To be able to get on horses like that is just awesome.”

That’s why Medicine Woman remains a featured piece of the Roundup Rodeo puzzle.