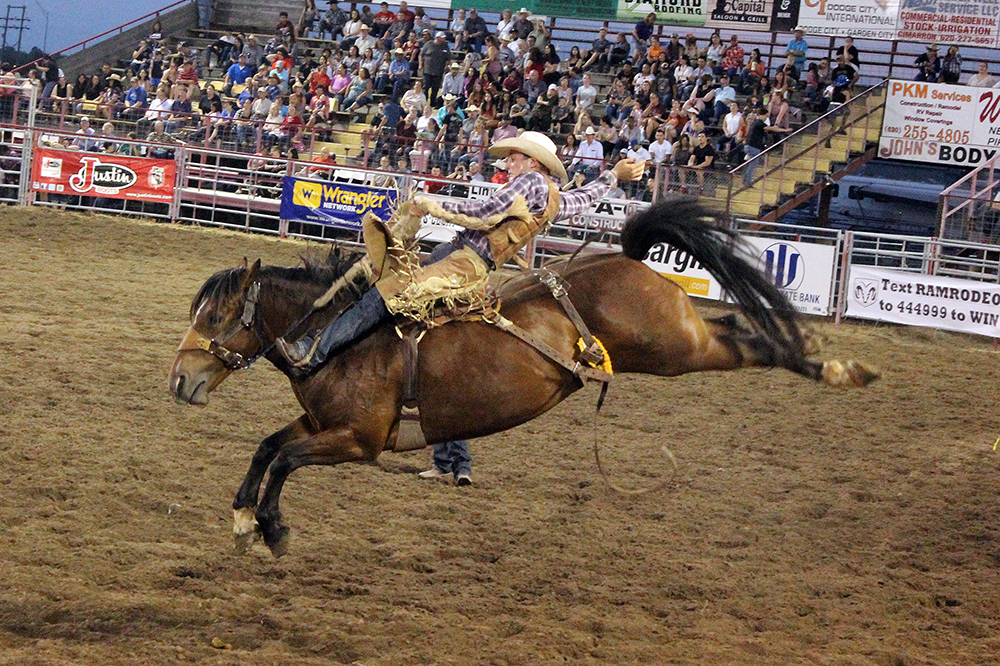 DODGE CITY, Kan. – In just his second year as the primary livestock producer at the Dodge City Roundup Rodeo, Frontier Rodeo frontman Heath Stewart has much to live up to this summer.

In saddle bronc riding, Rusty Wright posted big scores all week, matching moves with Frontier’s Let ’Er Rip for 90 points to win the first round; he followed that with a 92 on Frontier’s Big News to win the championship round, the two-ride aggregate and more than $7,100 in southwest Kansas.

“We were thrilled at the way things went last year with Frontier Rodeo leading the charge,” said Dr. R.C. Trotter, president of the volunteer committee that produces the annual event. “It was a flawless transition from what we’ve had for decades because Frontier has been part of our rodeo for several years.

“Of course, you can’t really go wrong when you’ve got the best stock contractor in rodeo.”

The recognition is more than one man’s opinion, though. Frontier Rodeo has been the Professional Rodeo Cowboys Association’s Stock Contractor of the Year each of the past five seasons. It goes beyond what happens in Dodge City, though that’s a big part of it. Roundup Rodeo is recognized as one of the best in North America, and Frontier’s top animals perform in southwest Kansas each summer.

It also was named the Women’s Professional Rodeo Association’s top stock contractor a year ago; because the vote is made up of the women in ProRodeo, the honor is a reflection of Frontier’s dedication to producing not only high-quality entertainment but also world-class competition.

Eighteen Frontier animals were selected to perform at the 2019 NFR, which was the most of any stock contractor in the game. Animals from the Freedom, Oklahoma-based firm helped cowboys to three go-round wins. The contestants know the opportunities to catch fast cash come with Frontier livestock.

They are just part of an elite list of bucking beasts that make Dodge City home for week in the summer.