Seay has a storm surge 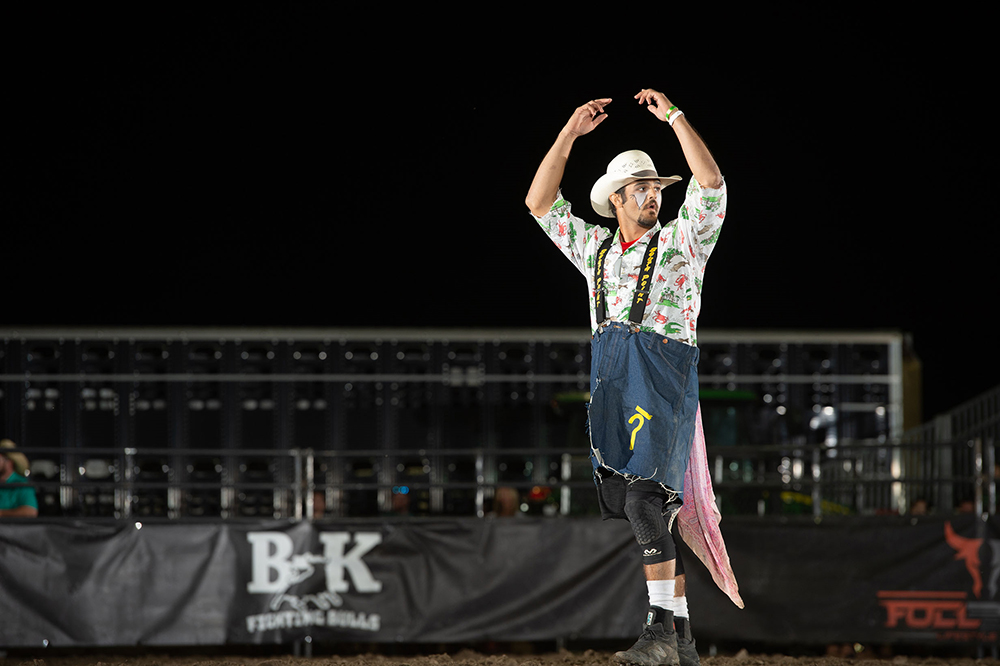 GRAND ISLAND, Neb. – Sage Seay needed the Ultimate Bullfighters more than any other competitor this past weekend at the Nebraska State Fair.

“Knowing that everything back home was devastated, it’s tough to think about,” said Seay, 24, of Hackberry, Louisiana, near the coast of the Gulf of Mexico. “Being on the road has kept my mind off things.”

His tiny village back home is a smaller version of what it once was, thanks to Hurricane Laura. Winds of more than 100 mph razed buildings and wrecked lives and livelihoods. In mid-Nebraska, Seay could only console his family, who asked that he remain on the road and take care of his bullfighting business. Things back home would be cared for until he returned.

So, the athlete who grew up around the bayous and swamps of the South focused his eyes on the business at hand. He kicked it off with a 91-point bullfight during Friday’s performance, then followed it with a 90 in the championship round to win the inaugural Ultimate Bullfighters Challenge presented by Pump & Pantry.

“Hurricane Laura gave me some motivation,” he said. “I really wanted to put ‘Hack’ on my back and give some positive things for the people there to focus on. Everybody’s house is gone. It’s devastating. They’ve grown up in those homes, and now they’re gone.

“To be able to take that win back home is a big deal to me. That win went out to my hometown.”

This isn’t the first hurricane Seay has experienced. Whether with his father in Hackberry or with his mom outside Beaumont, Texas, high winds, tornadoes and storm surge come at a regular occurrence for people that live along the Gulf Coast. This is, however, his first time to feel the pain that comes with the storms.

“I’m at an age where I see and understand what a bind it puts my family in,” he said. “With all the prior storms, we were young, and we didn’t know the heartache of losing something. Seeing this now, I feel it. It hurts to see your parents go through this.

“I watched my dad bust his ass day in and day out to build that place, then to see it get demolished in 30 minutes. My dad and my brother told me I needed to stay on the road, that they have this. So, I just want to be the positive light in their lives with all this other stuff going on.”

He returns to UBF action this weekend, competing in Ocala, Florida, on Friday and in Arcadia, Florida, on Saturday. He has only his recent memory to give him plenty of insights as he pushes toward the next step as the No. 1 man in the UBF.

“The people in Nebraska are great, and they came out to support us Friday night,” Seay said. “On Saturday night, they were hanging from the rafters. When you have a crowd behind you, that makes everything better. We feed off the energy of the crowd. Everyone went out there and laid it on the line because of it.”