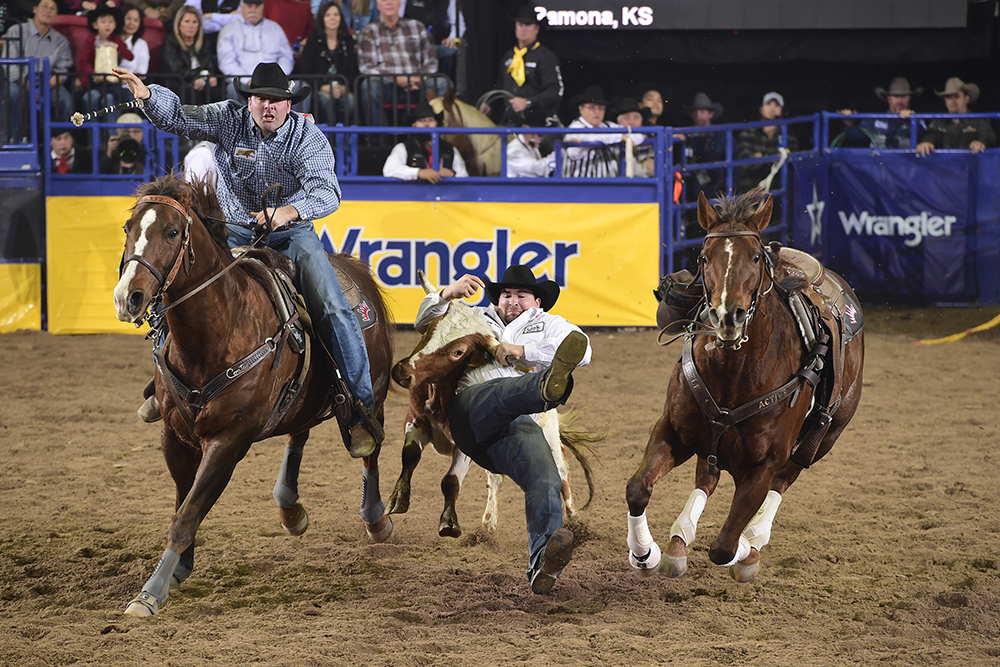 RAMONA, Kan. –Tanner Brunner took a different approach to the 2020 ProRodeo season than many of his fellow steer wrestlers.

“There were some guys that had the mentality that they had to rodeo harder because there weren’t as many opportunities as other years,” said Brunner, 27, from the rural community of Ramona. “My game plan was to go to the rodeos that made sense travel-wise and not try to break ourselves trying to get to every single rodeo. For a couple of weeks, I stayed home and went to one rodeo that week.”

It paid off in a season that was as unpredictable as it was delayed, and the Kansas cowboy will return to the National Finals Rodeo for the third straight year. He earned $45,885 and heads to ProRodeo’s championship event sixth in the world standings.

It’s the highest he’s been ranked over the past three years, but it also came with the least amount of money earned – in rodeo, dollars equal points, and only the top 15 on the money list in each event earn right to compete at the NFR; at its conclusion, the contestants in each event who have the most earnings will be crowned world champions.

The lower figures, of course, came in a season that was affected by the COVID-19 pandemic. When the world shut down in mid-March, so did the sport, and it didn’t return for two and a half months. Beyond that, more than half the events on a typical year were canceled, including many large rodeos that provide big paydays to its top finishers.

“It was a lot different than normal,” said Brunner, who credits his sponsors – Zesterra, Coats Saddlery, Cow Camp Ranch, SportsZone, MJE Livestock Equipment, the Kansas State University Rodeo Club, Animal Health International and Outpost Western Store – with helping him get up and down the rodeo trail. “There were a lot of miles between rodeos with none of the big rodeos to make it worth driving for.

“I got to see some different country that we’d never seen before. That was a good change. I really commend the committees that went through everything to put on the rodeos and continue having the rodeos. It couldn’t have been easy.”

COVID also made a change in the postseason. Since 1985, the Thomas & Mack Center in Las Vegas has been home to the NFR; because of the pandemic and with limitations set forth in Nevada, that wasn’t possible this year. The alternative is pretty nice, though; the NFR will take place Dec. 3-12 at Globe Life Field, home of the Texas Rangers in Arlington, Texas.

“It’ll be nice, and I can’t say I’ve ever competed in rodeo at a baseball stadium before,” said Brunner, who, like his parents and sister, was a member of the K-State rodeo team while attending college in Manhattan, Kansas. “Making the change in places may change my routine up a little bit. The arena setup is a little different, so we’ll have to get used to that.

“I just have to figure out what works best for my horses.”

Those horses are Miss Kitty and Slick, both of which Brunner recently purchased. Miss Kitty is the bulldogging horse, and Slick serves as her teammate and hazing the steers in a more direct path. Both horses have been instrumental in guiding Brunner back to the NFR to compete for the coveted Montana Silversmiths gold buckle that is awarded to the world champion. Former NFR qualifier Cole Edge will ride Slick and serve as Brunner’s hazer.

“I think having experience plays a lot into having a good season,” he said. “There’s also something about not having to worry about who’s on the other side. With Cole over there hazing, I feel completely comfortable. Those guys have been a great crew year in and year out. They’re great guys to travel with.

“This year was a nice break that we didn’t have to run the rubber off the tires. It was a lot more enjoyable to be out on the road, and we had a little more free time. That helps the horses feel good, too, which is always important.”

That will play into things once the team arrives in Arlington. This will be a much different trip from his home in the Kansas Flint Hills. Instead of driving 20 hours-plus to Las Vegas, it will take him close to seven hours – just a common drive for a rodeo cowboy that might drive hundreds of miles in a given day to get from one event to another.

Arlington is also just two hours from Sean Mulligan’s home in Coleman, Oklahoma, where Brunner will spend some time preparing for the championship.

“The horses and I will be acclimated to the weather,” he said. “We’ll practice four to five times a week a couple weeks before the NFR. It’ll be exciting to be in a new place.”

It also may be the ideal situation for him to develop the cohesiveness necessary.

“I’m feeling pretty confident in myself and with my horses,” Brunner said. “We won’t try to do too much. I was super aggressive my first year and tried to do too much. Last year, I couldn’t find a groove to get in.

“Ideally, I’ll take what the steers give me and make the most of every opportunity I can while I’m there.”

It’s all about being comfortable, and it takes repetition to make everything come together well.

“Being a three-time NFR qualifier is a great accomplishment,” he said. “I’m glad that I am able to make it three times in a row and hopefully make the NFR every coming year.

“I know what works for me, and I know what doesn’t work for me. I need to find the right combination of things that I know will help me perform to the best of my ability and get the most of my horses’ ability. I want to practice enough to get the start but not practicing too much to get my body and my horses’ sore. When you do everything right, it’ll make things a lot easier.”

Each step of his young career has been a bit of a climb, but that’s the only way to get to the top.